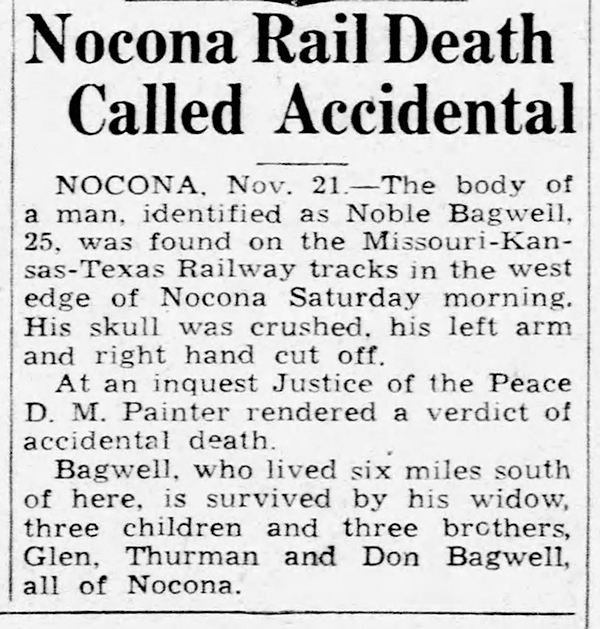 Graveside services will be at 10 a.m., Friday, July 22, 2016 in the Joy Cemetery with Wade Bryant, officiating. Arrangements are under the direction of Davis Funeral Home in Henrietta.

Jim was born on July 26, 1935 to Glen and Maude Francis (Staples) Bagwill. He married Gail (Covington) on January 7, 1957 in Gainesville, Texas. Jim was a Truck Driver and a member of the Joy Baptist Church.

Jim was preceded in death by his parents; one daughter, Ratonya Lea Bagwill.

He was buried at Joy Cemetery, Joy, Clay County, Texas. 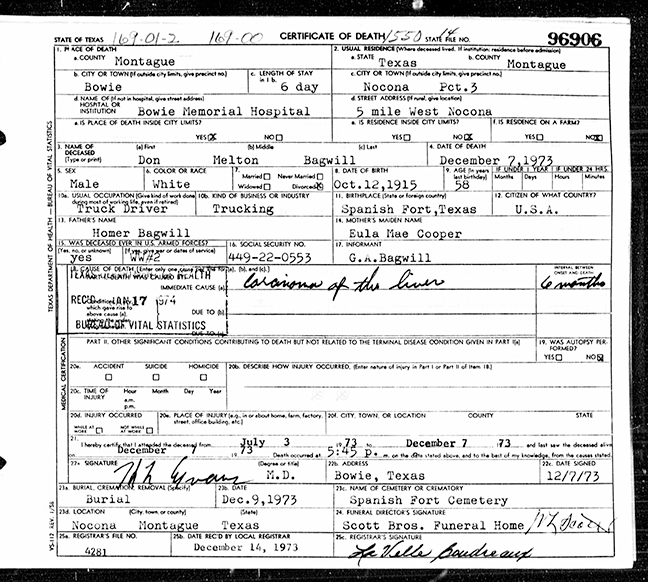 
Son of the late Oscar Monroe and Clara Smith Bagwell and the beloved husband of 47 yrs.to the late Sara Jane Dodson Bagwell.a 1951 graduate of White Plains High School,he was self-employed in business and as a cattle farmer.1

Mary Gladys (Bagwell) Spearman was the daughter of William Fred Bagwell and Emma (Richardson) Bagwell, the third of ten children.

Martha Ruth Bagwell, 77, of 2402-A Lane Ave., Anderson, formerly of Pelzer, died Saturday, Oct. 27, 2001, at Anderson Area Medical Center.
Born in Anderson County, White Plains Community, she was a daughter of the late William Fred and Emma Richardson Bagwell Sr. She was employed at York Manufacturing Co. for over 40 years and was a member of White Plains Baptist Church. She was recently honored for her service in the W.M.U.
Surviving are three sisters, Edith Harrison of Williamston, Gladys Spearman of Piedmont, Sybil Williams of Anderson; four brothers, Ellis Bagwell of Piedmont, Wade Bagwell of Greenville, Lonnie Bagwell of Anderson and Hoyt Bagwell of Pelzer.
Funeral services will be 3 p.m. Tuesday at White Plains Baptist Church with the Rev. Mark Spearman officiating. Burial will follow in the church cemetery.
The family will be at their respective homes and will receive friends from 1:30 to 2:45 p.m. Tuesday at the church.
Memorials may be made to White Plains Baptist Church Building or Cemetery Fund, 1435 Easley Highway, Pelzer, SC 29669.
Gray Mortuary, Pelzer, is in charge of services.
Published in The Greenville News on Oct. 29, 2001.1
She was buried at White Plains Baptist Church Cemetery, Anderson County, South Carolina.1

Born in Pelzer, he was a son of the late W.F. Sr. and Emma Richardson Bagwell, of Pelzer. He was a U.S. Navy veteran of World War II and was an active member of White Plains Baptist Church, where he was formerly a Sunday school teacher, deacon and trustee. He was employed by American Bakeries and was retired from the South Carolina Forestry Commission.

He was predeceased by brothers, William F. Bagwell Jr. and Carl Bagwell; and sisters, Edith B. Harrison and Ruth Bagwell.

Funeral services will be at 3 p.m. Thursday, March 4, 2004, at White Plains Baptist Church, with the Rev. Mark Spearman officiating. The family will receive friends from 1 to 3 p.m. Thursday, prior to the service, at the church. Entombment will be at Forest Lawn Memorial Park Mausoleum.

Gray Mortuary, Pelzer, is in charge of arrangements.

Published in The Greenville News on Mar. 3, 2004.1
He was buried at Forest Lawn Memorial Cemetery, Anderson, Anderson County, South Carolina.1