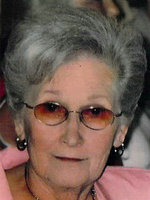 
She was buried on 11 October 2020 at Antioch Community Cemetery, Winn Parish, Louisiana.