Children of James A. Bagwell and Marjurey Armita Lyle

Children of Marjurey Armita Lyle and James A. Bagwell 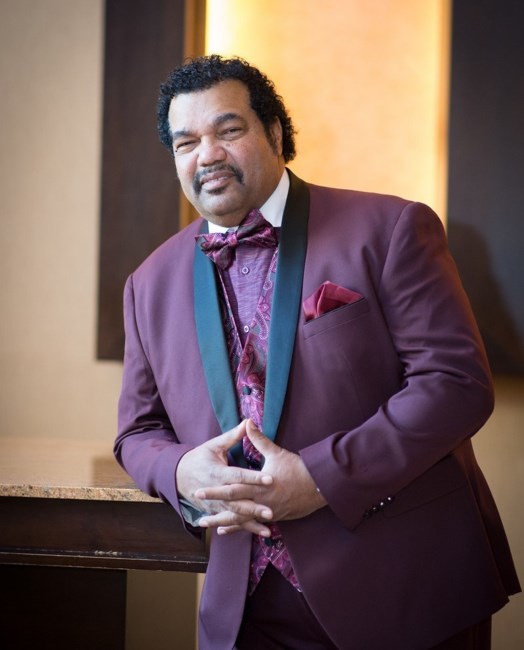 
While attending Mount Pisgah Baptist Church, he accepted Jesus Christ as his Savior in June of 1978 and his life was never the same. The Lord spoke to Pastor Bagwell and called him to Ministry in 1983. In June of 1992, he began serving as Interim Pastor for Mt. Zion M.B. Church in Galesburg, IL until God elevated him to Pastor/Teacher in November 1993.

As an advocate for secular and spiritual education, Dr. Bagwell always encouraged further education and displayed an example of lifelong learning as he furthered his education by obtaining his Masters of Divinity and Doctorate of Divinity degrees.

Dr. Darrell Bagwell faithfully served at Mt. Zion for 28 years until God called him home. He loved his church family and was truly an anointed Bible teacher who taught them by real world applications of the Word and personal experiences, interwoven with humor and wisdom. He was a no nonsense, tell it like it is, open and honest man of God.

Dr. Bagwell is the proud parent of two beautiful children; DJ and Denice Bagwell (FL) and Dameris Bagwell, who preceded him in death on December 1, 2008.

On September 6, 2014, he united in Holy Matrimony with his best friend Kimberly Bagwell. Within this union, God extended Dr. Bagwell’s family with another daughter Jasmine Tate (AZ).

Dr. Bagwell is the proud grandparent of Ivana, Zayne, Gianna, Elijah. He leaves to cherish his memories, his siblings: Linda Bagwell, Tony Bagwell, Goldie Bagwell, and Gregory Bagwell. He also leaves Ebonee Morris who he was an active father figure towards, a host of aunts, uncles, nieces, nephews, cousins, godchildren and dear friends.

Dr. Bagwell served as the 1st Vice Moderator for the Orthodox Woodriver District Baptist Association of Central Illinois and worked for over 30 years at Nestle Corporation until he retired.

Dr. Darrell Bagwell was an avid Chicago Bears fan, enjoyed to bowl, watch all things comedy, loved to cook... alone, and got the most joy from bringing a smile to others faces…strangers and all.

On the early morning of Tuesday, December 2nd, 2020, the Lord saw fit to call Dr. Darrell Bagwell from labor to reward, with his wife near his side. Despite all the fiery darts the Devil had thrown, Dr. Bagwell continued to be the same God fearing, Baptist preaching, standing on the Word and NOT caring who gets mad teaching, can't carry a tune singing, down on his knees praying, giving God all the glory praising, man of God up until the very end! He was a man of miraculous faith similar to Elisha and continued to give life even after his death by being an organ donor.

The family is appreciative to so many who helped to provide assistance to Dr. Darrell Bagwell over the past year. However, Kimberly could not have provided the level of care he deserved without the help of Erie Johnson, Deacon James Joyner, Henry Armstrong, Deacon Leroy Walker, Deacon Feotis Moore, Butch Ridgeway, Pastor Toby Carlos, and Ms. Carolyn Armstrong.


Dameris A. Bagwell, 21, of Bloomington, passed away at 8:26 a.m. Monday, Dec. 1, 2008, at BroMenn Regional Medical Center in Bloomington.
She was born Sept. 19, 1987, in Bloomington, daughter of Darrell A. and Beverly A. Baker Bagwell.
Surviving are her parents, Pastor Darrell and Beverly Bagwell; one brother, Darrell A. "D.J" Bagwell Jr; her maternal grandfather, Eugene (Sarah) Baker; two uncles, Anthony (Betty) Bagwell and Gregory A. (Linda) Bagwell and three aunts, Linda Jean Bagwell, Regeno Eppenger-Jones and Drenetta "Goldie" Bagwell of Chicago. Also surviving is a dear family friend, who Dameris thought of as a grandmother, Clara Walls; many cousins and dear friends; her godmother, Yvonne D. Smith and her godson, Kemmet Crutcher.
She was preceded in death by her maternal grandmother, Bernice Baker; her paternal grandparents, James and Majurey Bagwell; one uncle, Arthur Eppenger and one cousin, Shawnee Jones.
Dameris is a 2005 graduate of Bloomington High School. She was completing her senior year at Western Illinois University in Macomb, where she was majoring in journalism. She was a writer for the Western Courier. At WIU she was a founder and vice-president of the National Association of Black Journalism and a National Honor Society member. She was also named on the Dean's List for the last 3 years. While attending WIU, Dameris was involved with Hall Government at Corbin Hall, where she resided. She was a minority ambassador at WIU, and was a member of the WIU Student Orientation Staff and a peer educator for the University's Beu Health Center at WIU. She was a former member of Loving Missionary Baptist Church and an active member at Mt. Zion Missionary Baptist Church for 10 years, where she sang in its choir. She was an active member of O.W.D.B.A.
Homegoing funeral service will be at noon Saturday, Dec. 6 at Mt. Pisgah Missionary Baptist Church, 801 W. Market, Bloomington, with the Rev. Frank McSwain officiating. Visitation will be one hour prior to the service at the church. East Lawn Funeral Home in Bloomington is in charge of arrangements. Burial will be at East Lawn Memorial Gardens in Bloomington.
In lieu of flowers, memorials may be made to the Western Illinois University Chapter of the National Association of Black Journalism (NABJ).

M
Anthony J. Bagwell is the son of James A. Bagwell and Marjurey Armita Lyle.

M, b. November 1876, d. 1 May 1932
William P. Bagwell was born in November 1876 in Bowman, Elbert County, Georgia. He was the son of Martin VanBuren Bagwell and Sara Emily Nelms. He enlisted in the US Army for a period of 3 years. William P. Bagwell lived in 1900 in Bongas, Philippines. He lived in 1900 in Military and Naval Forces, Bongas, Philippine Islands. (an unknown value.) Enlisted in the US Army on 2 April 1915 at Camp Stotsenburg, Phillipine Islands. He was a Sergeant on Jul 17, 1915. He served at Camp Stotsenburg to Jul 5, 1918 and then at Fort McKinley, Phillipine Islands and was Honorably discharged on June 11, 1919. (Army Serial Number 315217). He served in the US Army. He is shown on a transport (Sheridan)from the Philippines Oct 15 1920 to San Francisco as a Sergent in the
Quartermaster Corps.

Bonnie was born December 25, 1955 in Detroit, Michigan. She had worked at France Power Solutions/SFEG in Fairview, TN for 35 years. She was a shipping manager. She was preceded in death by her father, Thomas Bagwell; her brother-in-law, Tim Mason.

She is survived by her daughter, Michelle "Missy" Hughes and her late husband, Mark, of Dickson; her mother, Arneatta Peeler of Dickson; her 2 grandsons, Jeremy Hughes and Isaac Hughes; her 3 sisters, Delilah Alexander (Donnie) of Dickson, Tina Mason of White Bluff, Joy Knight (Dale) of Clarksville, TN; several nieces and nephews.

Visitation will be held on Tuesday, April 25, 2017 from 5pm until 8pm. A funeral service is scheduled for 11am on Wednesday, April 26, 2017 at the Taylor Funeral Home with Bro. Randy Franklin officiating. Place of rest will be in the Union Cemetery.

Services under the direction of the Taylor Funeral Home.1


She was buried at Union Cemetery, Dickson, Dickson County, Tennessee.1

F
Drenetta "Goldie" Bagwell is the daughter of James A. Bagwell and Marjurey Armita Lyle.

F
Linda Jean Bagwell is the daughter of James A. Bagwell and Marjurey Armita Lyle.