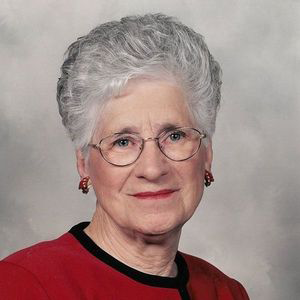 
Gladys Viola Harper Bagwell 98, of Easley, South Carolina went to be with her Lord and Savior Sunday January 30,2022 surrounded by her loving family. Born in Pickens, South Carolina she is the wife of the late Walter Dewey Bagwell and daughter of the late Harvey Augustus and Leila Lynch Harper.

Gladys loved cooking, gardening and crocheting, teaching Sunday School, and sewing , most of all she loved children especially her own.Gladys has lived through more changes than most read about, including the Great Depression, every war since World War II, 15 presidencies , the first moonwalk and countless technology. advances! She is remembered as a Proverbs 31 Woman.

The family request those wanting to issue condolences to do so at Robinson Funeral Home - Powdersville Road. A private graveside service will be held at a later time at Hillcrest Memorial Park.

Born in Pickens County, a daughter of the late Robert William and Jessie Breazeale Robinson, Mrs. Bagwell retired as cashier with Black's Fish Camp after thirty-eight years of service. She was a member of Cedar Rock Baptist Church, where she taught Sunday School to one thru four year olds for twenty-nine years and also belonged to Miss Ruby's Sunday School Class.

Surviving are a daughter, Nellie Carver and husband, Andy, of Seneca; a sister, Ruby Gilstrap of Easley; two grandchildren, Ashley Holcombe and Jonathan Holcombe; and a great-granddaughter, Georgia Lynn Chappell. In addition to her husband and parents, Mrs. Bagwell was predeceased by five brothers, Louie William, James, Charlie, Ernest and R.C. Robinson.

The body is at Robinson Funeral Home-Downtown, where the family will receive friends from 6 to 8 p.m. Tuesday and will be placed in the church at 1 p.m. Wednesday.

Condolences may be expressed at www.robinsonfuneralhomes.com or in person at Robinson Funeral Home-Downtown, which is assisting the family. 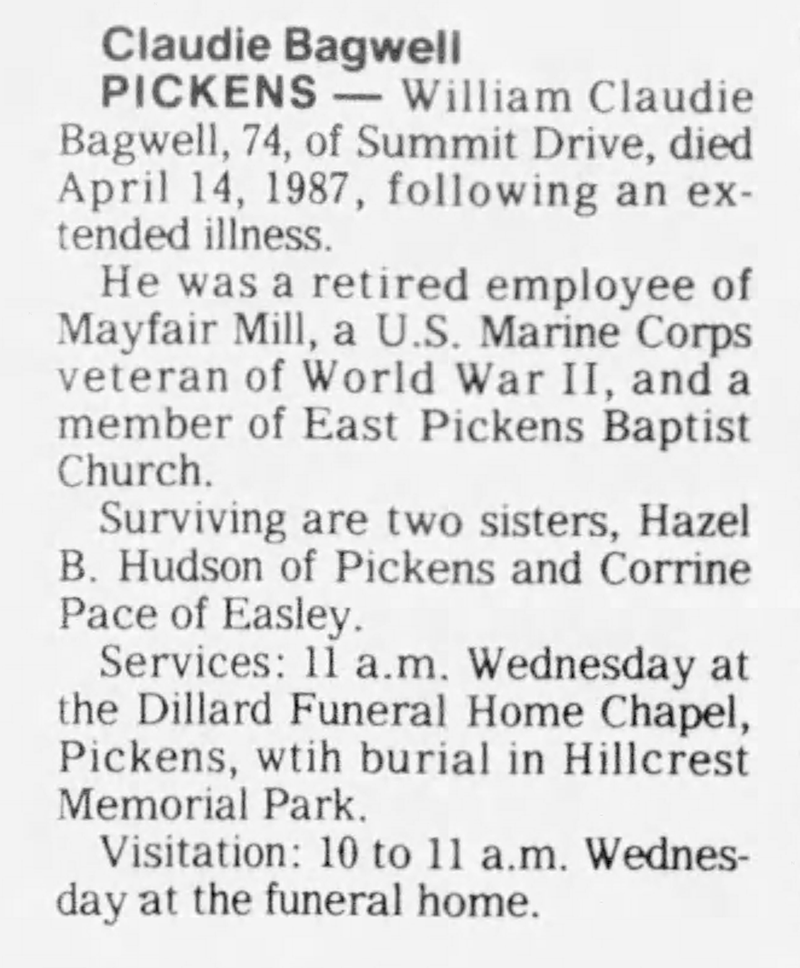 F, b. 8 June 1912, d. October 1980
Mae Finley was born on 8 June 1912. As of after 1930,her married name was Bagwell. She married William Claudie Bagwell, son of Ernest James Bagwell and Lillie Holden, after 1930. Mae Finley died in October 1980 at age 68. She was buried at Hillcrest Memorial Park, Pickens, Pickens County, South Carolina.

F, b. 30 January 1943, d. 24 December 2022
Lucille Stewart was born on 30 January 1943 in Pickens, Pcikens County, South Carolina. As of before 1960,her married name was Bagwell. She married Harold Elijah Bagwell, son of Roscoe Elijah Bagwell and Ethel Mae Hawkins, before 1960. Lucille Stewart died on 24 December 2022 in Easley, Pickens County, South Carolina, at age 79


Pickens, SC - Ms. Lucille Stewart Bagwell, 79, of Pickens, passed away Saturday, December 24, 2022 at Fleetwood Post Acute in Easley.
Ms. Bagwell was born in Pickens, SC on January 30, 1943 to the late Thomas B. and Bessie Norton Stewart. She enjoyed bowling, watching the hummingbirds, and the most important thing to her was to be able to spend time with her family. Ms. Bagwell retired from Ryobi as an assembler and was of the Baptist Faith.

In addition to her parents, Ms. Bagwell was preceded in death by a son: Dennis Bagwell.

Funeral services will be conducted at 2:00 PM on Thursday, December 29, 2022 in the Chapel of Dillard Funeral Home with interment to follow at Hillcrest Memorial Park in Pickens.

The family will receive friends from 1:00 PM until 1:45 PM on Thursday, prior to the service, at Dillard Funeral Home.

In lieu of flowers, the family requests that memorial donations be made to the Saint Jude Children's Research Hospital via their website at www.stjude.org/donate.