George Leslie Bagwell II was born February 12, 1967, the first son of William and Betty (Henneman) Bagwell. He was the little brother to Kristine and the big brother to Kimberly, Donnie and Robyn. Les was born and raised in Othello, graduating from OHS in 1985. While in high school, Les joined the National Guard and served for 6 years. He also worked at Genie Industries, Kaiser Aluminum and Master-Halco in Spokane over the years. In 1986, Les married Tina Flint and they had William Lyle and Rickiesha Lynn. In 2000, Les married Kathy Munter, becoming the step-dad to Joshua Munter. In 2020, Les married his angel, Martha, becoming the step-dad to Joey Lubben, Ida West and Christine Verstrate. Les was a great dad and an even better papa. Les loved life. Les never met a stranger. And if you met Les, you never forgot him. There were a lot of things Les liked to do like going to yard sales with his buddy Tim, making and building tokens of love for his bride, Martha, watching stock car races with his family and playing jokes on anyone he could, especially his grandkids. Les loved his body art as well, covering most of his body with ink by his longtime friend, Shawn. Les was diagnosed with lung cancer in October 2020 and passed through this life in the early morning hours of September 22, 2021, at home surrounded by his girls, Martha and Rickiesha, his boy Billy, his mama Betty, his brother Donnie and his sister Robyn. Les is survived by his wife, Martha, as well his children and their loves, Billy and Sabrina, Rickiesha and Chris ,James , Owen and Liam, Joshua and Kelsey, Joey and Tiffany, Ida and Matt, Christine and Cory, and his grandchildren, Emma, Christopher, Lena, Xzavier, Adelle, Isadora, Cassius, Danae, Paityn, Ronin, Cade, Matthew, Ashlee, Cooper and Kylo. He also leaves behind his mother, Betty, sisters Kristine (and Terry), Kimberly (and Bob), Robyn (and Jamey) and brother, Donnie (and Jennifer) as well as his many nieces and nephews, their spouses and children, all whom adored him. Les was preceded in death by his dad, Bill Bagwell, as well as his grandparents. Celebration of Life for Les will be held on Friday, October 8, 2021, at 11:00 am at the Othello Nazarene Church, Othello, WA. 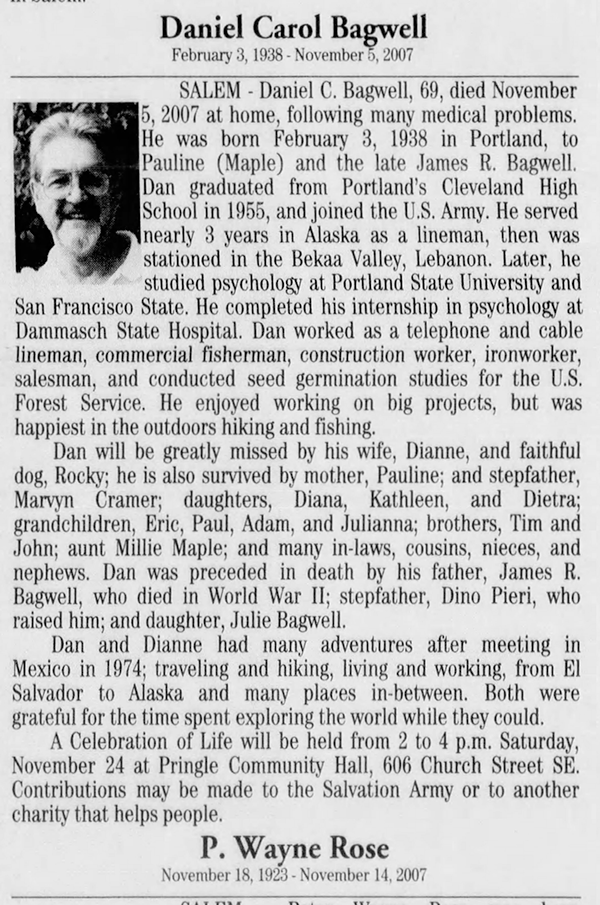