Amy Clair Bagwell was born on 28 July 1937 in Blytheville, Arkansas. She was the daughter of James Wiley Bagwell and Francis Mauvalene Long. Amy Clair Bagwell died on 12 June 2012 in Macon, Georgia, at age 74.

Z. L. Bagwell was born on 7 February 1880.1 He was the son of James Wiley Bagwell and Annie Eliza Davis. Z. L. Bagwell died on 21 September 1886 in Mississippi at age 6.1 He was buried at Mount Moriah Cemetery, Bruce, Calhoun County, Mississippi.1

F, b. 3 August 1920, d. 24 February 2010
Clara Williamson was born on 3 August 1920 in Abbeville County, South Carolina.1 As of after 1945,her married name was Bagwell.1 She married Roy Ellis Bagwell, son of Jefferson Arnold Bagwell and Annie Bell Smith, after 1945.1 Clara Williamson died on 24 February 2010 in Ware Shoals, Greenwood County, South Carolina, at age 89
WARE SHOALS
Clara Williamson Bagwell, 89 widow of Roy E. Bagwell, died Wednesday, February 24, 2010 at her home. She was born in Abbeville County, a daughter of the late Zema and Bertha Cathcart Williamson. She was a member of Broadmouth Baptist Church, the Broadmouth Honey Bees and attended A.D.Y. at Ware Shoals First Baptist Church.

She is survived by two sisters, Willie Treadwell and Laura Robinson, both of Ware Shoals and a special niece, Cheryl Vanadore who lovingly cared for her.

She was pre-deceased by two sisters, Ruth Davis and Carrie Lou Jones and a brother, James Williamson.

Funeral services will be conducted 2 PM Friday at Broadmouth Baptist Church with the Rev. Justin Phillips and Rev. Leon Jones officiating. The body will be placed in the church one hour prior to the service. Burial will follow in Greenwood Memorial Gardens.

The family is at the home of Mrs. Willie Treadwell, 901 Smith St. Ext. and will receive friends Thursday, 6-8 PM at Parker-White Funeral Home. Online condolences may be made to www.parkerwhitepruitt.com.1 She was buried at Greenwood Memorial Gardens, Greenwood, Greenwood County, South Carolina.1 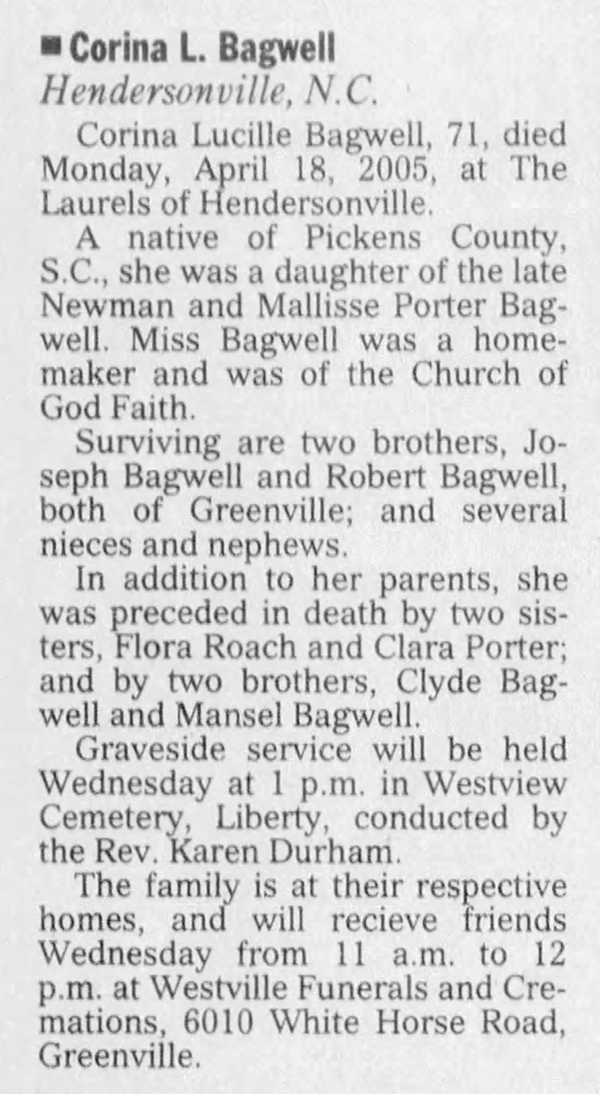 M, b. 6 April 1916, d. 2 February 1967
David Horace Bagwell was also known as Horace Bagwell. He was born on 6 April 1916 in South Carolina. He was the son of David Hampton Bagwell and Nannie Pearl Bailey. He served as a Sargent in Battery , 377 Parachute Field Artillery Battalion during World War II.

First activated on 16 August 1942 at Camp Claiborne, Louisiana, as the 377th Parachute Field Artillery Battalion (377th PFAB). The 377th PFAB, under the command of Lieutenant Colonel Benjamin Weisberg, participated in the development of doctrine for the employment of Parachute Artillery. After training in the United States, the battalion sailed to England, arriving in Liverpool on 18 October 1943. During late 1943 and early 1944, the battalion participated in training in preparation for Operation Overlord (Normandy).

Normandy:
On 6 June 1944, the 377th PFAB participated in Operation Overlord, the Normandy Invasion, parachuting onto Drop Zone A east of St. Mere Eglise in support of the 502nd Parachute Infantry Regiment. The drop went poorly, and the battalion lost 11 of its 12 75mm pack howitzers. The Paratroopers of the battalion fought as infantrymen until replacement howitzers arrived on 14 June 1944.] The battalion executive officer, Major Louis H. Cotton, was wounded during the drop and had to be evacuated.

Operation Market-Garden:
During Operation Market, the 377th PFAB landed on 19 September 1944 (D+2), occupied firing positions at the landing zone, and supported 1/506th PIR's defense against a German counterattack near Zon, as well as the 502nd PIR's attack from Best toward St. Oedenrode. The battalion remained near St. Oedenrode until it was withdrawn with the division to Camp Mourmelon in France.

They also were involved in the Battle of the Bulge. David Horace Bagwell died on 2 February 1967 in South Carolina at age 50. He was buried at Beaufort National Cemetery, Beaufort, Beaufort County, South Carolina.