F, b. 1920, d. 26 April 2012
Georgia Rickman was born in 1920. As of 21 September 1940,her married name was Bagwell. She married James Wiley Bagwell, son of Andrew Wiley Bagwell and Viola L. Edwards, on 21 September 1940 at Leflore County, Mississippi. Georgia Rickman died on 26 April 2012 in Alabama. She was buried at Memory Hill Gardens, Tuscaloosa, Tuscaloosa County, Alabama.

Graveside service will be at 11 a.m. Thursday, Feb. 1, in Kilgore City Cemetery with the Rev. Dewayne Beaty officiating. Arrangements are directed by Rader Funeral Home.

Judson, son of John Elliott and Stella Goforth Bagwell, was born March 23, 1905, in Overton, Texas. He moved with his family to Kilgore, Texas, in 1914. He graduated from Kilgore High School, College of Marshall and Baylor University.

Judson and Charleen Elder of Kilgore were married Aug. 18, 1928, and they had been married 67 years at the time of her death in 1996. They had moved to Longview where Judson had the first of several businesses. Two of those businesses were Motor Equipment Co. and Gregg Frozen Food Service. The frozen food "locker plant" was opened in 1943 in answer to problems caused by food rationing during World War II.

He was a member of the First Baptist Church, Longview Chamber of Commerce, the Boating Trades Association of Texas and the MRAA Retailers Hall of Fame.

He was preceded in death by his wife; his parents; a sister, Christine Bagwell; and a brother, Roger Bagwell.

He also is survived by a sister-in-law, Edith Jackson Bagwell; brothers-in-law, Frank Elder and Jack Elder and his wife, Winter Dickson Elder; and a nephew, R.G. Bagwell.


He was buried on 1 February 2001 at Kilgore City Cemetery, Gregg County, Texas.

Christine Bagwell was born on 26 June 1906 in Overton, Texas. She was the daughter of John Elliott Bagwell and Stella Goforth. Christine Bagwell died on 13 March 1954 in Dallas, Texas, at age 47. She was buried at Kilgore City Cemetery, Gregg County, Texas.

Graveside services for Will Davis "W.D." Bagwell, 81, of Elkhart will be held 10 a.m. Monday at Antrim Cemetery. Arrangements are under the direction of Bailey & Foster Funeral Home.

He was born at home and reared on the McCall farm in Redtown. He made his living farming in his early years and later as a rancher for Redtown Farm. He enjoyed welding, hunting and fishing. He never married but spent his life dedicated to his immediate family.

He is survived by his nephews, Jerry G. Ellis and wife Martha of Elkhart, and Kenneth McClinton and wife Ruby of Lake Palestine; great-nephew, James Howard and wife Kristin of Palestine; and a great-niece Leah Kozik and husband Tim of Elkhart.

He also will be missed by Nicholas and Natalie Kozik and remembered by all as a kind man with a gentle heart.

Condolence calls will be received from 6 to 8 p.m. today at the funeral home.

Family requests memorials may be made to Cartmell Home for Aged, 2212 West Reagan, Palestine, Texas 75801.
He was buried at Antrim Cemetery, Houston County, Texas.

Estelle Bagwell was born on 14 September 1909. She was the daughter of Eddie D. Bagwell and Alice Edna Stephenson. As of before 1940,her married name was Anderson. Estelle Bagwell married Jerome Anderson before 1940. Estelle Bagwell died on 31 March 1987 at age 77. She was buried at Anderson-Ellis Cemetery, Lovelady, Houston County, Texas. 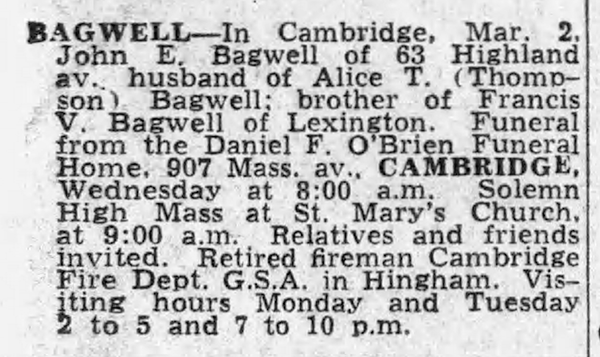