Henrietta Bagwell was born in 1855. She was the daughter of Kennedy Canida Bagwell and Elizabeth Savage.

Sarah Bagwell was born in 1865 in Georgia. She was the daughter of Kennedy Canida Bagwell and Elizabeth Savage.

Mrs. Bagwell was born October 19, 1922 in Macon, GA to the late Ernest Denny and Ruth Marsh Hoge Denny. She was retired from the granite industry where she was in administration and was a Worthy Matron of the Eastern Star.

In addition to her parents and husband she was preceded in death by brothers Benjamin Pierce Denny and Grady Denny.

Funeral services to celebrate her life will be held 2PM, Monday August 17 in the Memorial Chapel of Berry Funeral Home with Rev. Stacy Lynch officiating. Interment will follow at Elmhurst Cemetery with Wayne Massey, Tanner Massey, Alec Massey, Marty Bagwell, Kyle Bagwell and Landon Bagwell serving as pallbearers. The family is at their respective homes and will receive friends from 1-2PM just prior to the service at Berry Funeral Home.

Flowers are optional and memorials may be made in her honor to Alzheimer's Association Georgia
41 Perimeter Center East, Suite 550, Atlanta, GA 30346 or to United Hospice 435 Hawthorne Ave. Suite 200
Athens, Georgia 30606

Share your stories and photos in Mrs. Bagwell's Book of Memories online at www.berryfh.com.

Child of Lula B. Henson and William Lunsford Bagwell


Obituary:
The Savannah native was a 1977 graduate of Georgia Southern College. She was an accountant. She was a member of Midway United Methodist Church.

James Franklin Bagwell was born on 24 May 1924 in Dallas, Texas.1 He was the son of James Henry Franklin Bagwell and Lena Bernice Holley. He served from from 28 January 1943 to 13 June 1944 as an Aviation Ordancenceman, 3rd Class in the United States Navy in Squardaron VC-88 of (FM-2 Wildcats aboard the USS Hoggatt Bay (CVE-78) based out of Lingayen Gulf, Phillippines.1 James Franklin Bagwell died on 13 June 1944 in Siskiyou County, California, at age 20.1 He was buried at Oakwood Cemetery, Waco, McLennan County, Texas.1 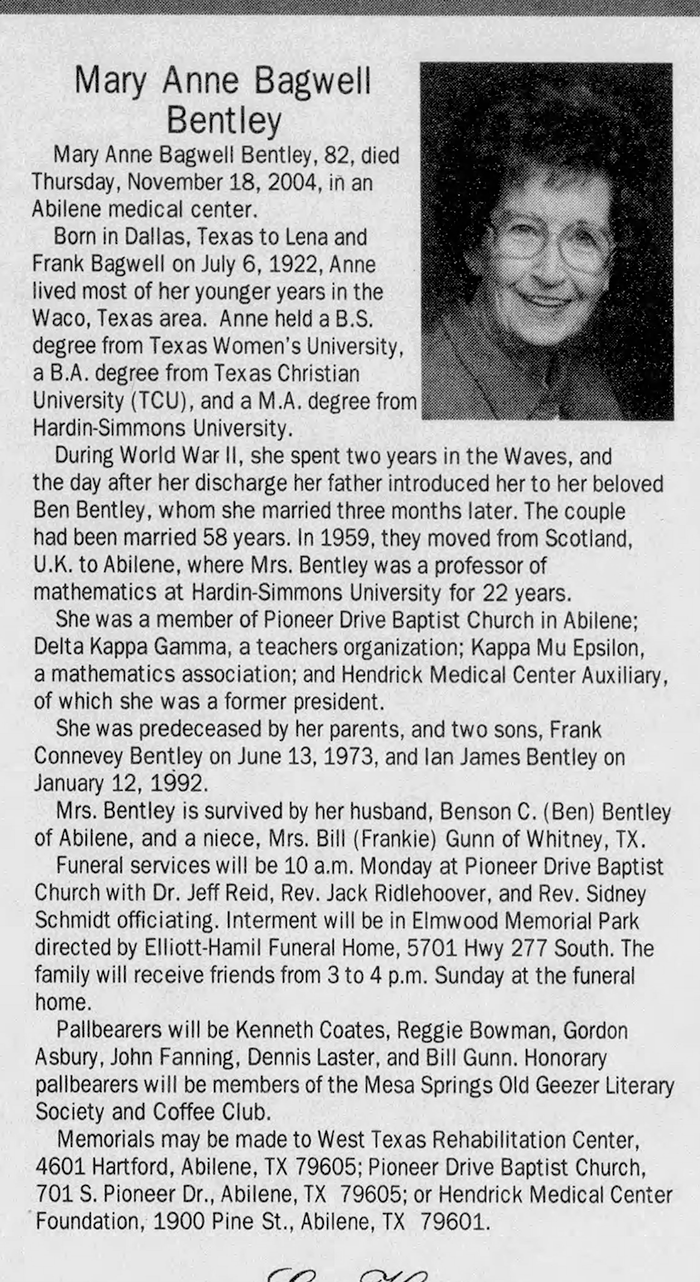 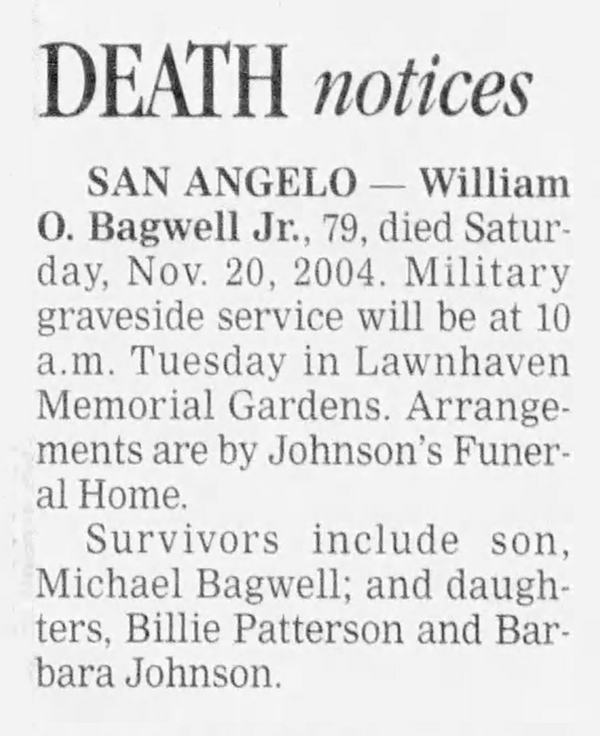