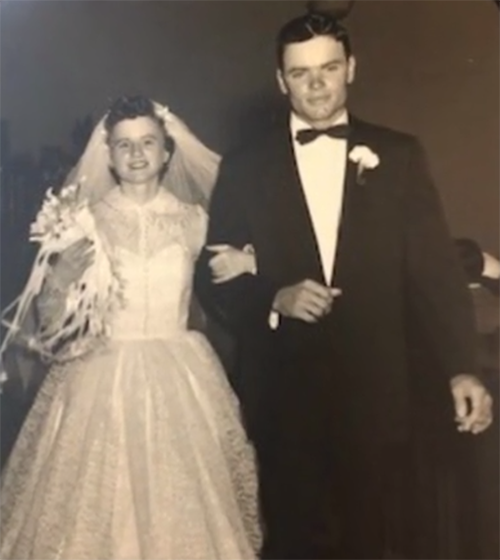 Betty June Bagwell Brown, age 86 of Monroe, passed away on Saturday April 18, 2020. She was born in Thomaston, GA on February 6, 1934 to the late Claud and Jessie Bagwell.

Surviving are her husband of 64 years, Perry Brown; Daughter and Son in Law, Kathy and Richard Adcock; Son and Daughter in Law, Ricky and Lisa Brown; Grandchildren, Josh Adcock, Jesica and Matthew Chancey, Mackenzie Brown, and Macall Brown; and her 3 Great Grandchildren, Will, Walker, and Madeline Chancey. Also surviving is her Brother in Law, Morgan Hodges and many nieces and nephews.

She was preceded in death by her Brothers and Sisters in Law, Fred Bagwell, Claud and Virginia Bagwell, Lamar and Hazel Bagwell; and her Sisters, Floy and B.D. Haynes and Doris Hodges.

Betty moved to Monroe when she was 10 years old. She graduated from Monroe Area High School in 1952 and married in June of 1955. She worked at the National Bank of Monroe (Walton County) for about 25 years. She was a member of Harmony Baptist Church where she taught Sunday school and Vacation Bible School.

In her retired years, she kept her grandkids (which she dearly loved), played golf, was an avid Bridge player, helped her husband Perry on the farm, and traveled the country and the world. She loved to paint, write, play games, and dance. She was always ready for anything! To know Betty was to love her!

In lieu of flowers, we are asking for donations to be sent to Harmony Baptist Church, 1310 Harmony Church Rd, Monroe, GA 30655.

Meadows Funeral Home, Inc. was in charge of arrangements.

F, b. 8 December 1936, d. 8 February 2010
Paula J. Bagwell was born on 8 December 1936 in Atlanta, Fulton County, Georgia.1 She was the daughter of James Emmitt Bagwell and Sarah Johnson.1 As of August 1960,her married name was Camp. Paula J. Bagwell married Stan Camp in August 1960. Paula J. Bagwell died on 8 February 2010 in Lawrenceville, Gwinnett County, Georgia, at age 73
Mrs. Paula Bagwell Camp, age 73, of Lawrenceville, GA passed away peacefully at home in her sleep surrounded by family Monday afternoon February 8, 2010 after a six year difficult battle with breast cancer. She was preceded in death by her parents; Emmitt and Sarah Johnson Bagwell. She is survived by: husband of forty-nine and a half years, Stan Camp, Lawrenceville, GA; daughters and sons-in-law, Melissa Camp, Boonton, NJ, Amy and Jerry Stanton, Buford, GA and Stephanie and Vincent Nardiello, Neptune, NJ; two grandchildren, Chloe Stanton and Natalie Stanton; sister, Jamie Adams, Burlington, NC; sisters-in-law and brother-in-law, Martha and Clayton Williams, Atlanta, GA and Patricia Camp, Decatur, GA; and several nieces and nephews. Mrs. Camp was born December 8, 1936 in Atlanta, Fulton County, GA. She was a 1954 graduate of Russell High School in East Point, GA and a 1958 graduate of Agnes Scott College where she received her bachelor's degree in psychology. Following graduation she worked for two years in the Personnel Dept. at Lockheed, in Marietta, GA. After she and Stan married in August 1960 she began her life as a beloved and loving homemaker, wife, mother and grandmother. Her kind, unselfish and graceful manner was the foundation for her family. They lived two years in Lawton, OK, 20 years in Decatur, GA, 17 years in New Providence, NJ and returned to Georgia after his retirement in September, 2000. She enjoyed reading, music and travel, but most of all being with family and friends. She was a member of Hamilton Mill United Methodist Church in Dacula, GA.1 She was buried at Broadlawn Memorial Gardens, Buford, Hall County, Georgia.1

Julia was born on February 23, 1933 in Pennsylvania to the late Frank M. Schulz and Florence Fitzgerald Schulz.

Preceded in death by her husband, Oliver Bagwell.

She was a retired Wake County School Teacher and the President of the VFW Women's Auxiliary.

A Celebration of Life will be held on Sunday, May 7, 2017 at 3 p.m., Lamb's Christian Center, 4519 Laurel Hills Rd., Raleigh. The family will receive guests from 2 p.m. until 3 p.m. prior to the service. Burial will immediately follow at Raleigh Memorial Park.

Online condolences may be sent to the family at www.MitchellatRMP.com

Services for Mary Ella Milliken Bagwell, 95, of Paducah will be at 2 p.m. Friday, Aug. 17, 2007, Milner and Orr Funeral Home of Paducah with the Rev. Billy Weaver officiating. Burial will be at Mount Kenton Cemetery.

She was preceded in death by her parents, William Monroe Milliken and Rexie Waller Milliken; her husband, Key Kevil Bagwell; one son-in-law, James A. Workman; and one sister, Anna Faye Blewett.

Friends may call Friday from noon until the funeral hour at Milner and Orr Funeral Home of Paducah.

Expressions of sympathy may take the form of contributions to the charity of one's choice.

Tributes may be left online at milnerandorr.com.

Children of L. B. Bagwell and Emogene Whisenant

F, b. 2 July 1927, d. 1985
Emogene Whisenant was born on 2 July 1927 in Arkansas.1 As of after 1940,her married name was Bagwell.1 She married L. B. Bagwell, son of Benjamin Isaac Bagwell and Laura Rickard, after 1940.1 Emogene Whisenant died in 1985 in Riverside County, California.1 She was buried at Pierce Brothers Crestlawn Memorial Park & Mortuary, Riverside, Riverside County, California.1

Children of Emogene Whisenant and L. B. Bagwell

F
Connie Bagwell is the daughter of L. B. Bagwell and Emogene Whisenant.

M
Jimmy Bagwell is the son of L. B. Bagwell and Emogene Whisenant.

M
Steven Bagwell is the son of L. B. Bagwell and Emogene Whisenant.

F
Diana Bagwell is the daughter of L. B. Bagwell and Emogene Whisenant.


She was buried at Oakwood Cemetery, Paris, Logan County, Arkansas.1


Buddy Charles Bagwell, who resided in Greenwood, Arkansas, passed away Thursday, March 6, 2014 at Mercy Hospital in Fort Smith.
He was born January 13, 1935 in Charleston, Arkansas to the late Dock Dolphus Bagwell and Marietta (Friar) Bagwell. He was 79 years old.

He was also preceded in death by his wife, Billie Jean (Ross) Bagwell; one sister Mary Ann Gasaway; and one grandson, Thomas Medlin.

Buddy was a retired sales representative for Keene Corporation in St. Louis. He was a 1952 graduate of Paris High School, and was a member of Greenwood Church of the Nazarene.


He was buried at Garden of Memories Cemetery, Charleston, Franklin County, Arkansas.

She was born on June 12, 1919, to the late Arbie Isom and Eddie (Mooty) Bagwell in Bradshaw, Texas. She married Grover Orr on October 7, 1937, in Tuscola, Texas. She was a member of the Green's Creek United Methodist Church.