Dorothy Bagwell is the daughter of Edward Foster Bagwell and Ruth Hinton.

Edith Bagwell is the daughter of Edward Foster Bagwell and Ruth Hinton. 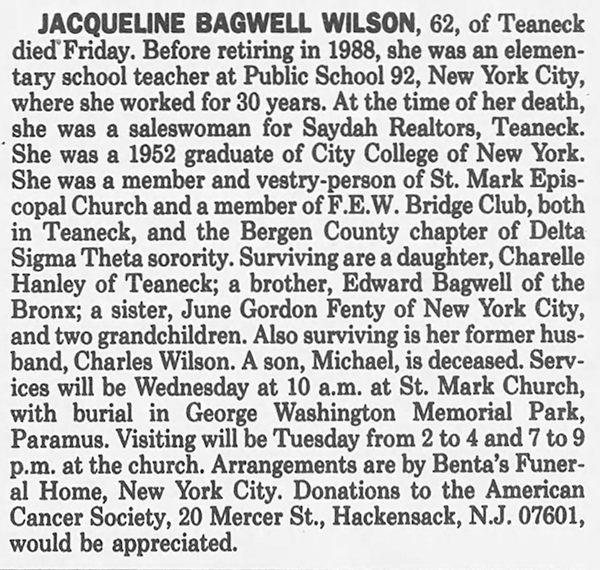 M, b. April 1882
Charlie Conner was born in April 1882 in Virginia. He married Mary Bagwell, daughter of Henry R. Bagwell and Martha Jane Blake, before 1912.


October 23, 2016 Dixie Lee Bagwell went to be with her Lord and Savior Sunday, October 23, 2016. Throughout her battle with cancer, she always glorified God and knew her life was temporary and her mission was simple - to love, serve, and make disciples. Dixie is survived by the love of her life, Jack Lynn Bagwell. Also surviving are her three daughters, Robin Grosse and her husband David, Jacque Bagwell, and Samantha Blackwood and her husband Jeff. Her grandson Jonathan Grosse and his wife, Lindsey, and their sons, Carter and Jack; her grandson Brian Grosse and his wife, Stacy, and their son, Crawford; her granddaughter Baylee Blackwood and her son, Beckham; and another grandson, Daegan Blackwood, also survive her. Dixie was born July 17, 1944 in Ellwood City, Pennsylvania to Mildred and C.W. Long. She moved to Texas shortly after where she would soon meet her "gray fox," Jack Bagwell. Dixie and Jack met at a young age through a blind date their mothers arranged. They lost touch for a few years but were later reunited and married April 3, 1965. Together, they raised their three daughters and loved taking them on family trips with their best friends, Carole and Ernie Gibson, and their daughters. In Midland, Texas, they were active members at Temple Baptist (formerly Corinth Baptist), Westside Freewill Baptist, and Kelview Heights Baptist Church where they made many lifelong friends. Like her parents, Dixie loved to sing and used her gift for the Lord, singing in The Romans Road Trio with Vernon Syler, and her daughter Jacque, and later included Marvae Blanscett. The group traveled to sing at various churches and festivals and won "Best Gospel Trio of the Year" at the Brand New Opry in Odessa, Texas. If one thing is certain about Dixie, it's that she absolutely adored her Savior. Almost every conversation she had with anybody led to talking about the Lord and her love for Him. She taught vacation Bible school, Sunday school, and was on Midland Memorial's Shepherd's staff for many years. She loved her Bible study groups, and when she became too weak to do her own, she loved her family to share with her what they were learning in God's Word. Dixie was a fun-loving, goofy, and God-fearing mom to her daughters. Some of her and her daughter's best memories where Saturdays, when they would rush to finish the chores so they could tune into American Bandstand and dance until they laughed themselves into delirium. Dixie also delighted in traveling, reading, playing games, writing both poetry and short stories, and chatting with family and friends. After years of residing in Midland, Texas, Dixie and her husband retired to Lindale, where they quickly joined First Baptist Church and started establishing new friendships. While living in Lindale, Dixie gained four great-grandsons that she took delight in. Above all, Dixie was always thinking about how she could minister to others. Having been saved at a young age, she knew her true mission in life. In her last years, she thought it her mission to witness to her doctors and nurses and would often have her granddaughter write Scripture on the whiteboard in her hospital room in hopes it would spark a conversation with her caregivers about the hope she found in the Lord. The last verse written in her hospital room was Hebrews 12:1-3, "Let us run with endurance the race that is set before us, looking to Jesus, the founder and perfector of our faith, who for the joy that was set before Him endured the cross, despising the shame, and is seated at the right hand of God. Consider Him who endured such hostility against Himself, so that you may not grow weary or fainthearted," - and she did just that! She ran with endurance and unwavering faith. While we grieve for Dixie's precious life on earth, we also find abundant joy knowing that she is finally able to meet her Savior, whom she so eagerly longed to see. Private burial service will be held for family.
Published by Midland Reporter-Telegram on Oct. 30, 2016.