Coyt died on March 4,2020 in his long time home in Lubbock. He was born on February 19, 1939 to Hazel Farmer, and Joe Powell both preceding him in Death.
For 50 years he drove a truck for Waples-Platter, Fleming Foods, and eventually Wal- Mart. Along the way he met and married the love of his life Bobbye Jo, who also precedes him in death. They were married for nearly 50 years.
He leaves behind a daughter, Thelma Hollis, and her husband Ricky; brother Darrell Powell, and his wife Gloria; sisters: Bettye Miles, Joyce Hooker and her husband David; 2 grandchildren: Tom Redmon, and Darrell Redmon; 4 great-grandchildren; and more family than can possibly be mentioned.
Know he Loved you all.
PALLBEARERS
Tom Redman, Darrell Redman, Eugene Bagwell, Carl Taylor, Robbie Hillhouse, Jerry Taylor, and Roger Bagwell
From Resthaven Funeral Home. 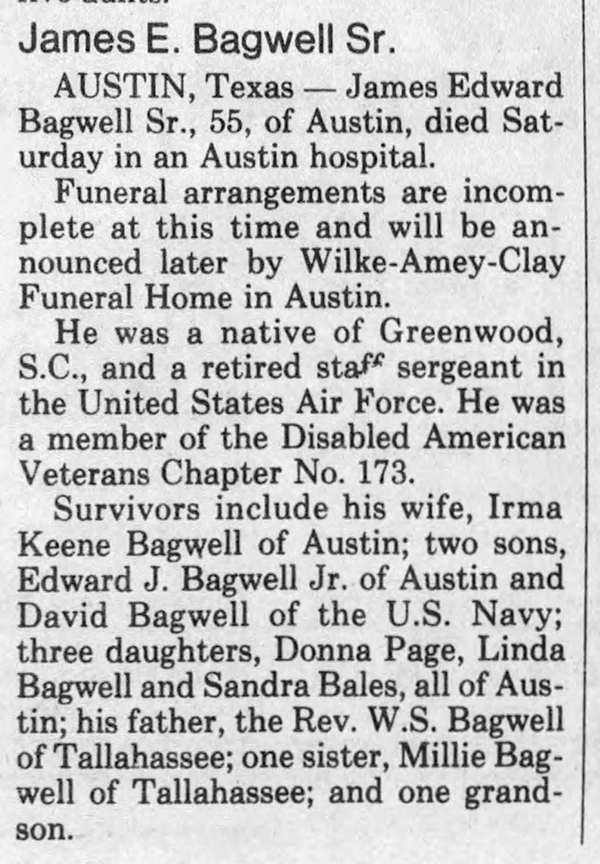 Edward Johnnie Bagwell was also known as James Edward Bagwell Sr. He was born on 14 January 1928 in Greenwood, South Carolina. He was the son of Reverend Walter Smith Bagwell and Aretta Marler. He retired from the US Air Force after 21 years of service during the Korean and Vietnam wars. He enlisted 20 Jun 1945 and was released 21 Oct 1946 and re-enlisted 9 Nov 1965 to 23 Dec 1970. Edward Johnnie Bagwell married Irma Belia Keene before 1958. Edward Johnnie Bagwell died on 10 December 1983 in Austin, Texas, at age 55. He was buried at Cook-Walden Capital Parks Cemetery and Mausoleum, Pflugerville, Travis County, Texas.