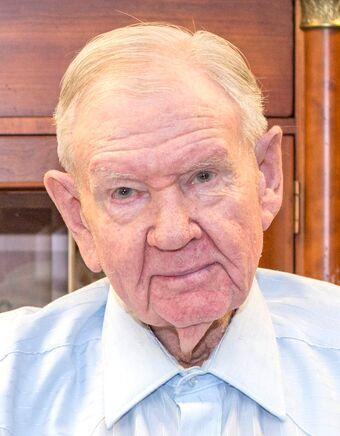 
Edwyna Bagwell, 94, passed away August 22, 2020, in Colorado Springs, CO. She was born July 11, 1926, in Graham, Texas, to Alex and Winnie (Lisle) Pugh. She grew up in various Phillips Oil company towns in the Graham area. Her dad was later transferred to Sanford in the Texas Panhandle, and Edwyna graduated from high school at Phillips.

She received a Business Administration degree from West Texas State College in Canyon, where she met J.A. Bagwell. They eloped to Amarillo and were married 73 years. They farmed and ranched at Amistad, New Mexico, and Edwyna taught school there for a few years. All three of their daughters were born in New Mexico.

In 1960 they moved to the San Luis Valley in Colorado where J.A. and his dad ranched. Edwyna always said those years were some of the happiest of her life. In 1970 they sold the ranch at Villa Grove, moved to Poncha Springs, Colorado, and bought a KOA Campground south of Yellowstone National Park in Wyoming. They ran the campground seasonally for 21 years and made numerous life-long friends to add to the ones they already had.

After they sold the campground, they retired to Poncha Springs, where Edwyna was a member of the Salida Church of Christ. In 2006 J.A. and Edwyna, along with their daughters and granddaughter, visited Ireland to celebrate Edwyna’s 80th birthday. The trip was a highlight for the whole family, and J.A. and Edwyna talked about it often in the following years.

Edwyna was a smart, independent woman and also the ultimate nurturer. (She could drive a loaded grain truck with a baby and a 4-year-old on the seat beside her!) She grew up around a large extended family that she loved dearly and remained close to her entire life. She was a devoted wife, mother and grandmother, a dedicated friend, wonderful cook, and a great hostess. The girls’ friends often said how comfortable and welcome they felt in the Bagwell home. She sewed clothes for herself and her family, making Western shirts for J.A. and mending dozens of pairs of Levis for him. She also had jobs outside the home at various times. When they ran the campground, she became a full partner in the business, keeping the books and performing many other tasks around the campground, along with making three meals a day for family and employees. Despite all the hard work over the years, she was a fun person who loved to laugh. Family get-togethers always turned to telling funny family stories.

In 2016 she and J.A. moved to The Bridge assisted living facility in Colorado Springs. She was happy to be close to her youngest daughter, Barbara, as well as her granddaughter, Carol. She made several good friends and loved playing Bingo with them.

Edwyna was predeceased by her parents, her sister Hallie Wanda Williams, and her grandson Brian Stillings.

She will be missed by many, and we wait with hope for our reunion with her in Heaven.

There will be no service at this time. Colonial Funeral Home in Dimmitt, Texas, is handling arrangements, and burial will be in Castro Memorial Gardens Cemetery in Dimmitt.

Cards may be sent to J.A, c/o Carol Stillings, 5606 Oro Grande Dr., Colorado Springs, CO 80918, and memorial contributions may be made to the Gooseneck Cemetery in Graham, Texas, or Feeding America.


Robert Elmo Bagwell, 89, of Hazlehurst, Mississippi, died May 30, 2021, in Jackson,
Mississippi. He was born October 12, 1931, near Dimmitt, Texas, to Jim and
Robertha (Wood) Bagwell. He attended his early school years in the Bethel Community
School until the family moved to a farm and ranch near Amistad, New Mexico, in 1944.
There he attended grades eight through ten, then graduated from Clayton High School
in Clayton, New Mexico, in 1949. He went on to attend New Mexico A&M in Las Cruces,
New Mexico, where he participated in the ROTC program.

While in college, Robert spent one summer in India, having been selected to go by the
International Farm Youth Exchange program (IFYE). He and the other young men who
had been chosen all returned to the U.S. on the Queen Mary. The entire experience
was an eye-opening event for a farm boy! He enjoyed sharing those experiences with
the family through the years, and always appreciated having been given that
opportunity. Another summer he spent several weeks on a range management tour as
part of a college course requirement, visiting ranches all over New Mexico. At that time,
he expected to spend his life as a farmer and rancher.

Robert (his college friends soon called him Bob) joined the Air Force after college. His
last year of service was spent in Korea during the Korean War, in charge of a radio unit.
He shared some harrowing stories of their experiences in the mountains of Korea with
the snow and extreme cold temperatures. At the end of his tour, as he was heading
back to the U.S. to be discharged, he went to Japan where he purchased yardage of
beautiful silk fabrics to take home for his mother and his three sisters.

After his discharge, he drove to Mississippi on the way back to NM, to visit his best
friend from college who was living there. While there, he was introduced to a girl named
Billye Faye Wade.

Falling in love with Billye Faye, Robert moved to Mississippi, where he and his love
were married in 1956. The marriage produced two wonderful children, Michael and
Donna, and two beautiful grandchildren, Riley and Kyla.

For several years, he worked as a carpenter and because of his exceptional skills and
leadership ability, he was hired as the superintendent for Jones and Thompson
Construction Company in Jackson. He loved working with beautiful woods, and began
making cabinets on weekends.

As a boy, he always loved to create things with his hands. He continued that interest as
he created a variety of beautiful things to share with his family. He learned to turn bowls,
and made them from a variety of exotic woods. He was a member of the Craftsman’s
Guild of Jackson.

He enjoyed doing for others, especially if it involved his creativity. And the most
important thing in his life was family. Parents, siblings, nephews and nieces, along with
aunts, uncles and cousins, always came first.

A graveside service was held at the Center Point Methodist Church Cemetery at 10:00
a.m. on June 4, 2021, conducted by Rev. Stuart Givens, minister of the Sylvarena
Baptist Church in Wesson. An American flag was presented to the family and taps were
played by an Air Force Honor Guard.

Charles Bagwell is the son of Abner Coleman Bagwell and Wilhelmina Strohm.

William Lee Bagwell is the son of Abner Coleman Bagwell and Wilhelmina Strohm.

Lafayette " Funeral Services for Colton Paul Bagwell, 19, will be held on Thursday, July 5, 2007 at 2:00PM at David Funeral Home Chapel of Lafayette. Visitation will be held on Thursday, July 5, 2007 from 9:00AM until the time of the services. Interment will follow at Lafayette Memorial Park Cemetery. Colton a native of New Iberia and a resident of Lafayette died on Sunday, July 1, 2007 in Lafayette. He was employed as an apprentice mechanic at Rotorcraft Helicopters, and was known for his love of playing baseball, karate, motor cross racing, hunting, and spending time with family and friends. Those that knew him knew he had a heart of gold and the ability to make people laugh. He is survived by his parents, Coleman and Carla Griffin Bagwell of Lafayette; a sister, Carly Bagwell of Lafayette; his paternal grandparents, Billy and Sandra Bagwell of West Monroe; his Maternal Grandmother, Loretta Griffin of Shreveport; and numerous aunts, uncle, and cousins. He is preceded in death by his maternal grandfather, Carl Hayden Griffin; and an uncle, Kevin Bagwell. Pallbearers will be Eric Wilchen, Ryan Stork, Cyrus Best, Josh Bagwell, Dino Gilliam, and Tim McTier. Honorary Pallbearers will be Nicholas Amos, and Devin Myers David Funeral Home of Lafayette will be handling the arrangements.

F
Carly Bagwell is the daughter of Coleman Bagwell and Carla Griffin.