F, b. 21 November 1931, d. 10 May 2017
Deneen LaVerne Mangrum was born on 21 November 1931 in Tennessee.1 As of before 1961,her married name was Bagwell.1 She married Jesse Robert Bagwell, son of Harvey Greely Bagwell and Tennie Rebecca Vaden, before 1961.1 Deneen LaVerne Mangrum died on 10 May 2017 at age 85.1 She was buried at Woodlawn Memorial Park and Mausoleum, Nashville, Davidson County, Tennessee.1 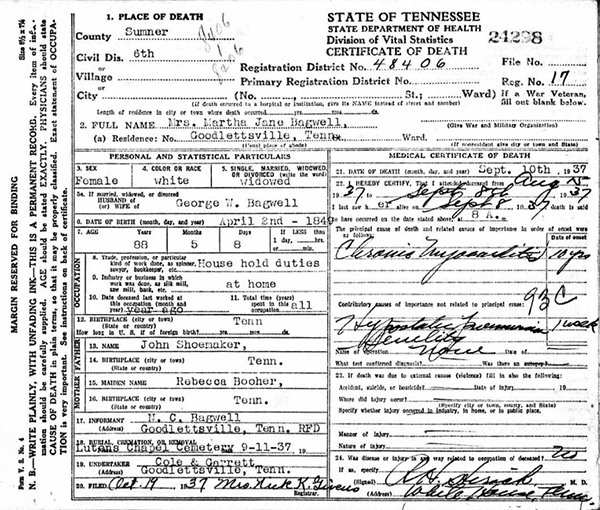 M, b. circa 1879
Richard Bagwell was born circa 1879 in Robertson County, Tennessee. He was the son of George W. Bagwell and Martha Jane Shoemaker. 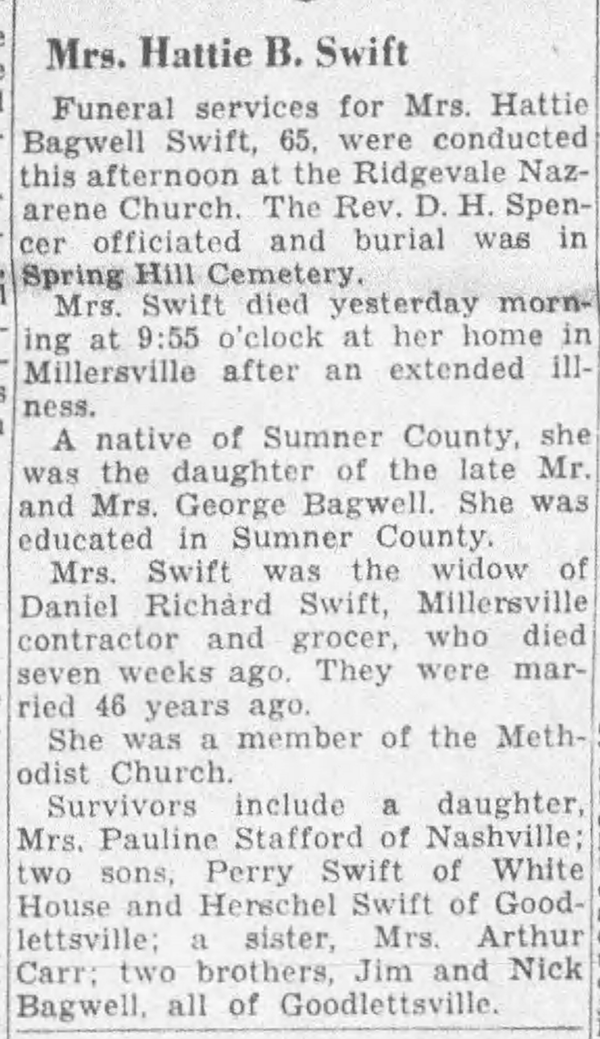 Ethel worked for Acme Boot Company, was retired from Montgomery County Nursing Home and was also a private healthcare sitter.

She loved sewing, quilting, canning, reading and teaching children at her home church. Most of all she loved her family and rejoiced as the circle grew. She was also a lifelong member of Mallory's United Methodist Church in Thomasville.

Ethel was 92 years old when she passed away on April 25, 2016 at Montgomery County Signature Health.

She was preceded in death by her husband; an infant son who died at birth in August 1957; her parents; brothers Frazier Bagwell, Allen Bagwell, E George Bagwell, F Grover Bagwell and Fred Bagwell; and by her sisters Catherine and Ruby. Survivors included four married sons; seven grandchildren; ten great-grandchildren and two 2nd-great-grandchildren.

Funeral Services were held at the Chapel of Cheatham County Funeral Home, and burial was in Mallory's Cemetery in Thomasville.


Original obituary in The Leaf Chronicle on April 27, 2016.1 She was buried at Mallorys Cemetery, Thomasville, Cheatham County, Tennessee.1

Mr. James Walter "J.W." Sherwood of Slocomb went home to rest with the angels after a courageous two year battle with cancer on Friday, October 19, 2012 at his home surrounded by his loving family. He was 64.

The family will receive friends at the funeral home on Monday from 6:00 until 8:00 p.m.

Mr. Sherwood was born on February 2, 1948 in Antigua, West Indies to the Molly Aileen McSevney Sherwood and the late George Lester Sherwood. Mr. Sherwood proudly served his country in the Army with the 30th Infantry Division and in the Long Range Patrol in Vietnam. He graduated from Wallace College with a degree in Business. J.W. was the owner and operator of J. W.'s Sign Service for the past 30 years. J.W. was devoted to helping all the children with Child Advocacy Center and Children's Network. J.W. was also a devoted fisherman. He fished with the Southern Kingfish Association for several years. He was the captain of the Hunker Down and loved to go to his lake house in Eufaula and fish on Lake Eufaula with his special friend, Jerry Brown. He was a member of the Home Builders Association, the VFW and the Elks Club. Our lives will never be the same without such a great man.

He was preceded in death by his father, George Lester Sherwood; two brothers: Michael Floyd Sherwood and Steven James Sherwood; and a son-in-law: Jimmy Edwin Dansby.

The family wishes to extend a special thank you for all the care and kindness that was given to Mr. Sherwood during this journey of his life: Dr. Hejal Patel, Dr. Thomas Brown, Dr. Mark Fischer, Dr. Stavros Diavolitsis, Dr. Michael Soppet, Dr. Jason Beaver; all of the staff on 4th and 6th floors of Flowers Hospital; all of the 3rd floor oncology staff; and the staff of Alacare Hospice. We would also like to express our sincere thanks to Anne Sherwood for always being there with all of her love and caring kindness. Our warmest thanks go to Jerry and Barbara Brown for always being there to assist with whatever was needed.
He was buried at Memory Hill Cemetery, Dothan, Houston County, Alabama.

F, b. November 1865
Cornelia Thomas was born in November 1865 in Alabama. She was the daughter of William H. Thomas and Catherine Holland. Cornelia Thomas married Jessie Speigner on 22 March 1885 at Dale County, Alabama. As of before 1892,her married name was Speigner.