Wilton Edward Bagwell, 88, husband of the late Betty Hamby Bagwell passed away on Saturday, January 26, 2019. He was born in Easley, S.C. and the son of the late Nancy and Reverend William Parker Bagwell.
He is survived by his daughter Karen Bagwell Smith (Michael) of Spartanburg, sister Pat Thompson (Ralph) of Mauldin and grandsons Jonathan Bagwell (Loren) of Greenville and Scott Bagwell (Erica) of Pendleton. He is also survived by his great grandchildren Cooper and Campbell Bagwell.
He was predeceased by his son, Michael Bagwell and siblings, Ken Bagwell and Juanita Staton.
Wilton served in the Marine Corps during the Korean War and was also a member of the local chapter of the Marine Corp League in Greenville. He was very active in the community and served on the Greenville County Election Commission and S.C. Restaurant Association and loved working with the Easter Seals and Lions Club. Wilton, Betty and Mike ran Colonial Drugs Restaurant at Pleasantburg Shopping Center together for more than 18 years.
A memorial service will be held at NewSpring- Eastlan at 625 S. Pleasantburg Drive in Greenville, S.C on Thursday, January 31st at 2 p.m. Visitation will be held immediately following the service.

F, b. 1 August 1903, d. 11 July 1993
Annie Lee Worley was born on 1 August 1903 in Georgia.1 As of before 1921,her married name was Bagwell. She married Eddie Louis Bagwell, son of William Alfred Bagwell and Leanna Anna Lesley, before 1921. Annie Lee Worley died on 11 July 1993 in Greenville, Greenville County, Georgia, at age 89.1 She was buried at Greenlawn Memorial Park, Easley, Pickens County, South Carolina.1 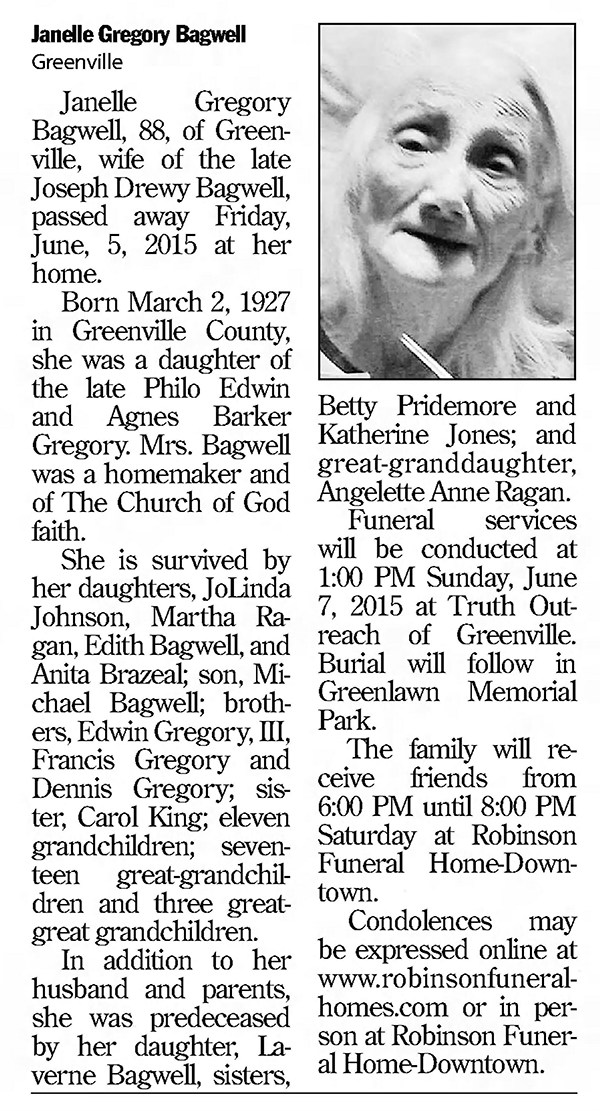 Born March 2, 1927, she was a daughter of the late Philo Edwin and Agnes Barker Gregory. Mrs. Bagwell was a homemaker and of The Church of God faith.

In addition to her husband and parents, she was predeceased by her daughter, Laverne Bagwell, sisters, Betty Pridemore and Katherine Jones; and great-granddaughter, Angelette Anne Ragan.

F, b. 1894, d. 1985
Minnie Elvira Duncan was born in 1894.1 As of after 1910,her married name was Bagwell.1 She married Calvin Andrew Bagwell, son of William Robert Bagwell and Mattie Laura Lawson, after 1910.1 Minnie Elvira Duncan died in 1985.1 She was buried at Greenlawn Memorial Park, Easley, Pickens County, South Carolina.1

Children of Charles Ambrose Bagwell Sr. and Cora Victory May