Buford Austin "Ben" Bagwell was born on 23 October 1921 in Claude, Armstrong County, Texas.1 He was the son of Arthur Claude Bagwell and Edna Garrison. Buford Austin "Ben" Bagwell died on 23 September 1997 in Amarillo, Potter County, Texas, at age 75 OBIT: Amarillo Globe-News, Texas ( 9-24-1997)
Buford Bagwell
Buford "Ben'' Bagwell, 75, of Canyon, died Tuesday, Sept. 23, 1997.
Graveside services will be at 2 p.m. today in Claude Cemetery at Claude. Arrangements are by Brooks Funeral Directors of Canyon.
Mr. Bagwell was born in Claude. He attended rural schools in Armstrong County and graduated from Claude High School in 1939.
He served in the Navy during World War II aboard a mine layer. He participated in the North Africa and Okinawa invasions. He was honorably discharged in 1946 and then attended West Texas State Teachers College in Canyon.
Mr. Bagwell worked for Shamrock Oil and Gas Co. He retired from the Texas Fish and Game Commission.
Survivors include two sisters, Odessa Brunson of Claude and Addie Mae Cristy of Emmett, Idaho; and seven brothers, Ray Bagwell of Statesville, N.C., Houston Bagwell of Live Oak, Fla., Bob Bagwell of Tulsa, Okla., Leonard Bagwell of Loma, Colo., Leon Bagwell of Gruver, and Milton Bagwell and Rex Bagwell, both of Claude.
The family requests memorials be to Cal Farley's Boys Ranch and Affiliates, the Armstrong County Museum or a favorite charity.1 He was buried at Claude Cemetery, Claude, Armstrong County, Texas.1 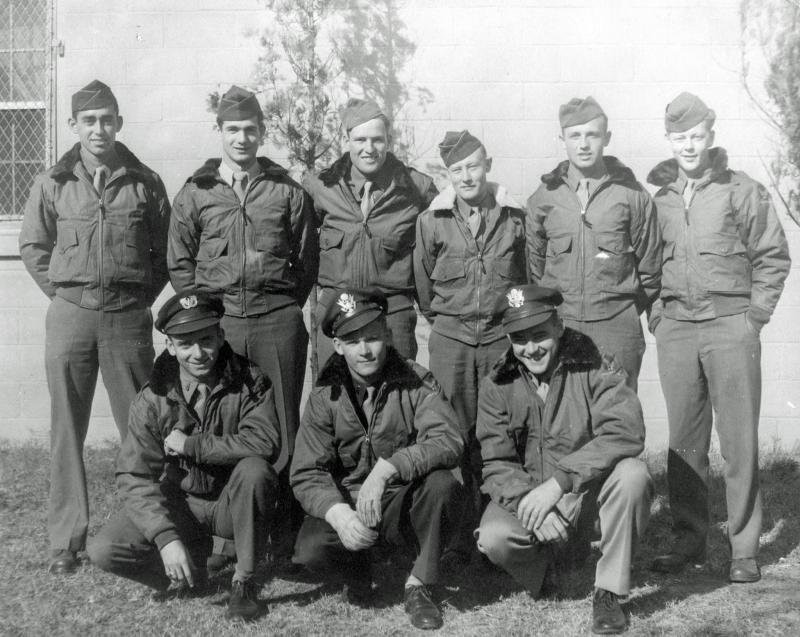 Houston Lloyd Bagwell was born on 19 October 1919 in Claude, Armstrong County, Texas. He was the son of Arthur Claude Bagwell and Edna Garrison. Houston Lloyd Bagwell married Martha Audrey Blanton after 1940. He was in the 447th Bomb Group, as the flight engineer for the B17 named Stormy Weather.

The 447th Bomb Group flew B-17 Flying Fortresses on strategic bombardment missions out of Rattlesden, Suffolk. With their first mission coming on Christmas Eve, December 24, 1943, their main focus was hitting sites that would weaken enemy forces connected with a planned ground invasion of France the following summer. This meant they were attacking
ports, missile sites, airfields and marshalling yards in France, Belgium, and Germany. In June 1944 itself, the Group supported the invasion of Normandy by bombing airfields and other targets near the beachhead. One of the Group's B-17s, named "Milk Wagon", set the record for the number of missions with no turn-backs for a B-17 in the 3rd Air Division with 129 missions.

Trained for combat with B-17's. Moved to England in Nov 1943 and assigned to Eighth AF. Entered combat in Dec 1943 and operated chiefly as a strategic bombardment organization.
From Dec 1943 to May 1944, helped to prepare for the invasion of the Continent by attacking submarine pens, naval installations, and cities in Germany; ports and missile sites in France; and airfields and marshalling yards in France, Belgium, and Germany. During Big Week, 20-25 Feb 1944, took part in the intensive campaign of heavy bombers against the German aircraft industry.

Supported the invasion of Normandy in Jun 1944 by bombing airfields and other targets near the beachhead. Aided the breakthrough at St Lo in Jul and the effort to take Brest in Sep. Pounded enemy positions to assist the airborne invasion of Holland in Sep. Also dropped supplies to Free French forces during the summer of 1944. Turned to strategic targets in Germany in Oct 1944, placing emphasis on sources of oil production until mid-Dec.

2nd Lt Robert E Femoyer, navigator, won the Medal of Honor for action on 2 Nov 1944: while on a mission over Germany, his B-17 was damaged by flak and Femoyer was severely wounded by shell fragments; determined to navigate the plane out of danger and save the crew, he refused a sedative and, for more than two hours, directed the navigation of the bomber so effectively that it returned to base without further damage; Femoyer died shortly after being removed from the plane.

During the Battle of the Bulge, Dec 1944-Jan 1945, the group assaulted marshalling yards, railroad bridges, and communications centers in the combat zone. Then resumed operations against targets in Germany, attacking oil, transportation, communications, and other objectives until the war ended. During this period, also supported the airborne assault across the Rhine (Mar 1945). Returned to the US in Aug 1945. Inactivated on 7 Nov 1945.

Grace Bagwell is the daughter of Lonnie D. Bagwell and Martha D. Stevens.