Orville was married to Florence Ethel Bellinger, daughter of Henry Bellinger and Mary Ellen Harmon. The marriage ended in a Divorce.

Girard---- Orville Bagwell, 73, of Mount Carmel was found dead of an apparently self-infected gunshot wound at 4:30 pm., Tuesday at the home of his brother, the body is at C.M. Shane Funeral home. 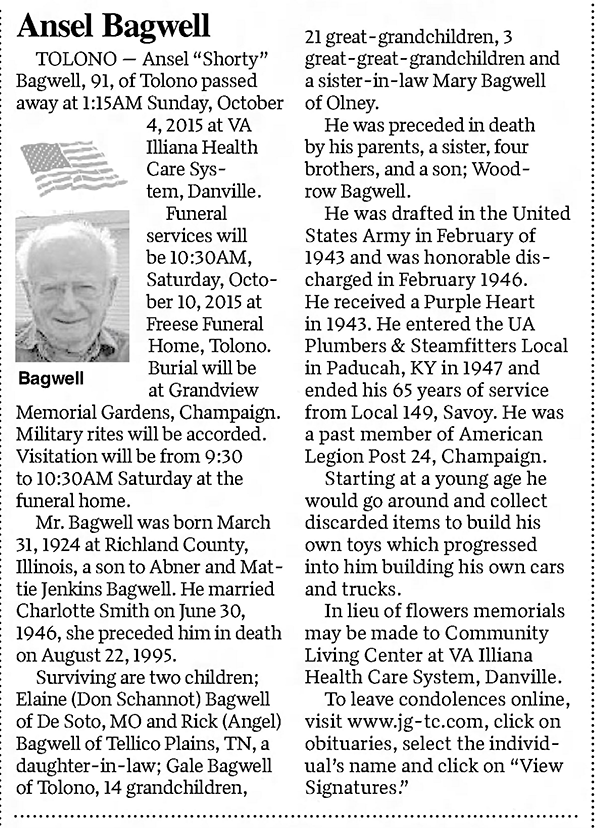 He was preceded in death by his parents, a sister, four brothers and a son, Woodrow Bagwell.

He was drafted in the U.S. Army in February 1943 and was honorable discharged in February 1946. He received a Purple Heart in 1943 [for his injuries sustained in the Italy campaign].

He entered the UA Plumbers & Steamfitters Local in Paducah, Ky., in 1947 and ended his 65 years of service from Local 149, Savoy. He was a past member of American Legion Post 24, Champaign.

Starting at a young age, he would go around and collect discarded items to build his own toys, which progressed into him building his own cars and trucks.

In lieu of other expressions of sympathy, memorials may be made to Community Living Center at VA Illiana Health Care System, Danville. He was buried at Grandview Memorial Gardens, Champaign, Champaign County, Illinois.

M, b. 6 May 1927, d. 28 December 1943
Eldo Ivan Bagwell Bagwell was born on 6 May 1927 in Dundas, Richland County, Illinois.1 He was the son of Abner Guy Bagwell and Mattie Jenkins. Eldo Ivan Bagwell Bagwell died on 28 December 1943 in Richland County, Illinois, at age 16
Eldo Bagwell, 16, died at Jackson Hospital last night, failing to revive from an anesthetic.

The youth, who is employed at Olney shoe factory, went to the bathroom at his home, 408 W. Locust street, to wash his head and cut his hand on the broken handle of the water faucet, the cut tearing a ligament in the palm of his hand. He was taken to Jackson Hospital to have the ligament tied up, and was given an anesthetic. He failed to revive from it.

He is survived by his mother, Mrs. Mattie Bagwell, of Olney, one sister Mrs. Jack Davis of LaFollette, Tenn., and four brothers, Ercy Henry of Marion, Clessie Bagwell and Leland Bagwell of Olney, and Ansel Bagwell, U. S. Army, recently injured in the Italian fighting but now back with his unit in the front lines in Italy.

M, b. circa 1862
George Washington Race was born circa 1862 in Illinois. He married Mary Emeline Bagwell, daughter of John Wilkie Bagwell and Margaret Low, on 16 March 1880 at Jasper County, Illinois. 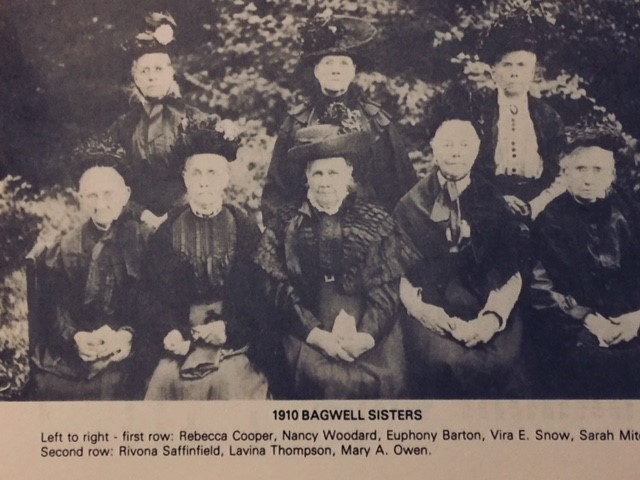