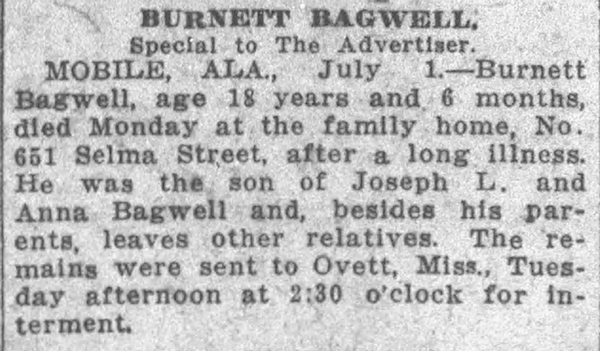 Lillian Bagwell was born in January 1897 in Mississippi. She was the daughter of Joseph E. Lee Bagwell and Annie A. Burnett.

Garfield Bagwell was born in August 1899 in Choctaw County, Mississippi. He was the son of Joseph E. Lee Bagwell and Annie A. Burnett.

Lucile Bagwell is the daughter of Joseph E. Lee Bagwell and Annie A. Burnett.

Jennie Bagwell is the daughter of Joseph E. Lee Bagwell and Annie A. Burnett.

G. Y. Bagwell was born on 19 January 1881. He was the son of William Asberry "Billy" Bagwell and Sarah Elizabeth Box. G. Y. Bagwell died on 12 September 1882 at age 1. He was buried at Mount Nebo Cemetery, Ackerman, Choctaw County, Mississippi. 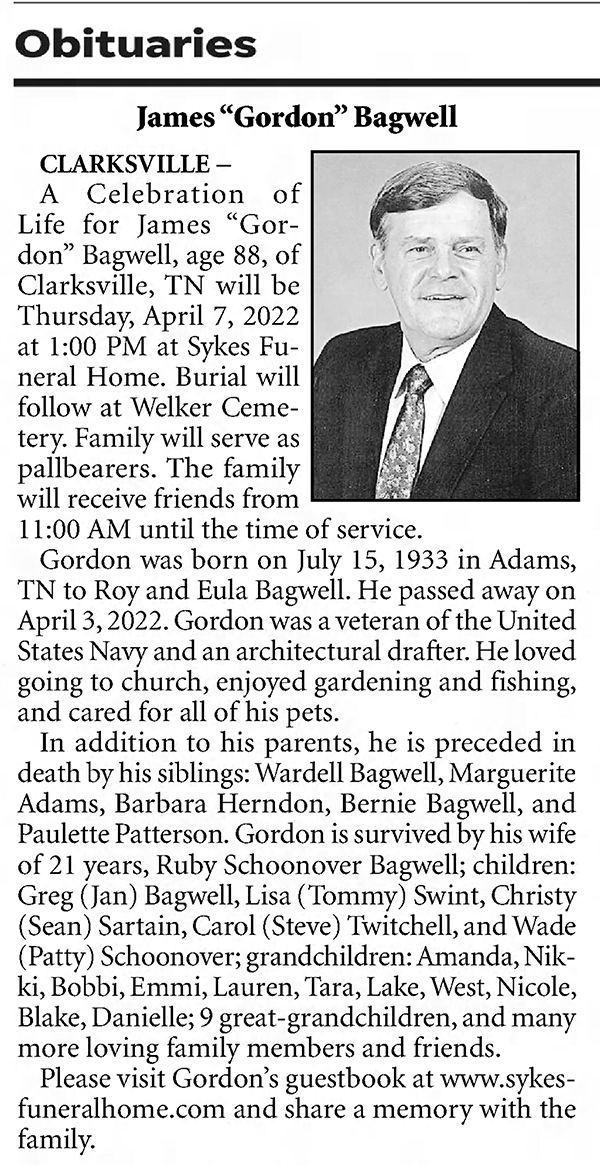 A Celebration of Life for James “Gordon” Bagwell, age 88, of Clarksville, TN will be Thursday, April 7, 2022 at 1:00 p.m. at Sykes Funeral Home. Burial will follow at Welker Cemetery. Family will serve as pallbearers. The family will receive friends from 11:00 AM until the time of service.


Gordon was born on July 15, 1933 in Adams, TN to Roy and Eula Bagwell. He passed away on April 3, 2022. Gordon was a veteran of the United States Navy and an architectural drafter. He loved going to church, enjoyed gardening and fishing, and cared for all of his pets.

In addition to his parents, he is preceded in death by his siblings: Wardell Bagwell, Marguerite Adams, Barbara Herndon, Bernie Bagwell, and Paulette Patterson.


He was buried on 7 April 2022 at Welker Cemetery, Montgomery County, Tennessee.

She was married 1st to Charles B Kelly and 2nd to the Reverend Howard Herndon.

A member of First Baptist Church, she was also a retired surgical nurse for Dr James Vermillion.

Barbara was 79 years old when she passed away on January 9, 2016 at Spring Meadows Healthcare, Clarksville.

She was preceded in death by her parents; her 2nd husband; the father of her children Charles B Kelly; daughter Vianne (Kelly) Peay; two brothers; and by her sister Marguerite (Bagwell) Adams. Survivors included three daughters and two sons-in-law; a married brother; sister; six grandchildren; and a great-grandchild.

Funeral Services were held at Neal-Tarpley-Parchman Chapel, and burial was in Pleasant View Baptist Church Cemetery.


Original obituary in The Leaf Chronicle on January 13, 2016. She was buried at Pleasant View Baptist Church Cemetery, Montgomery County, Tennessee.

He was a veteran of World War II, a retired carpenter, and a member of Liberty Church of God.

At the time of his death, he was survived by his wife; his mother; two sons and two daughters; two sisters, Clara Porter and Corina Bagwell of Greenville; two brothers, Adolph Bagwell (and another still living) of Greenville; three grandchildren.

His funeral was held on Saturday, June 24, 1978, in the chapel of Dillard Funeral Home.

She moved to Clebit when she was ten. When World War II broke out in 1941, she had not yet graduated from high school. She joined the school in Clebit and Pickens as the teacher the following year with no higher education. It was a testimony to her love of education that she completed both her Bachelors degree and her Masters degree in Durant, Oklahoma over eleven summers, having never attended a traditional semester program.

She taught forty-one years in the Clebit, Wright City and Idabel school districts, completing her career as principal of Southeast Elementary. Throughout her long and impressive career, she led and participated in the development of many leading edge educational programs, including co-author of the nationally sold Phonics in a Nutshell and co- sponsor of the first early childhood education program in McCurtain County. While she was an innovator in her field, her passion was always for her students. And she continued to follow her students many years after they left her care. She was always there.

Betty Bagwell received multiple awards, including McCurtain County Teacher of the Year in 1977, the "Torch Award" for community service, the "Hats Off Award" from the Idabel Chamber of Commerce and Woman of the Year for 1977 from the Business and Professional Women's Club. She also served as president of the McCurtain County Retired Educators Association from 1991-92. Betty was a long-time faithful member of the First Baptist Church in Idabel.

She was preceded in death by her parents, a brother, William Benjamin, a sister, Willa Johnson, her husband and father of her son, David Preston Balisle, Jr. , her husband Tom Bagwell and two granddaughters, Brittiny Jo Balisle and Tamara Jo Balisle.

Betty leaves to cherish her memory her son, Vice Admiral (ret) Phil Balisle, his wife, Patricia, grandchildren Jennifer Jo Balisle and Jeffrey Michael Balisle, and his wife, Christy. In addition she was loved by her great granddaughter, Eve Elizabeth Balisle. All reside in Falls Church, Virginia.

A Celebration of Life service will be held at 2:00 pm on Sunday, June 21, 2015 at the White Family Chapel with Rev. Miles Wesner officiating. A private interment will follow at the Dennison Cemetery in Idabel, Oklahoma.1 She was buried at Denison Cemetery, Idabel, McCurtain County, Oklahoma.