Although she had failing health for the last two years, she never lost her feisty spirit and sense of humor. She was 83 years old.

A prominent business woman for more than fifty years, she is best remembered as the owner of White Horse Tax Service, and continued to work there until 2005.

Ms. Cox was born in Travelers Rest, SC to the late Vincie Ann Howard and Richard William Bridgeman. She was the youngest of seven children and was the last surviving member of her family. She graduated from Travelers Rest High School in 1943 and was an active and long-time member of Tanglewood Baptist Church in Greenville.

Surviving are two daughters, Sharon Jones Magee and her husband Bob, of Waxhaw, NC, and Kay Cook and her husband, Larry, of Troutman, NC; a son, Dennis Patrick Cox of Greenville; grandchildren, Douglas Sprayberry, David Jones, and Ronnie Redmond, all of Greenville, Chase Bagwell of Troutman, NC, Pam Staton of Woodruff, and Robyn Jones Jennings of Atlanta, GA. She also leaves behind her caregivers and dear friends, Barbara Yount and Dot Gillespie; 12 grandchildren and 10 great grandchildren.
In addition to her parents and six siblings, Ms. Cox was preceded in death by a son, David Bagwell, a daughter, Brenda Redmond, and two granddaughters, Theresa Sprayberry Howe and Rhonda Michelle Bagwell.

Visitation will be held on Friday, March 12, 2010, from 6:00 - 8:00 p.m., at Thomas McAfee Funeral Home, Northwest.
Funeral Services will be held at 1:30 p.m. on Saturday, March 13, 2010 at Tanglewood Baptist Church, Greenville, with the Reverends David Osborne and Shane Donald officiating.

The family will be at the home of Ms. Cox, 8 Lenhardt Court, Greenville.

F, b. 11 July 1925, d. 12 October 2011
Clarene Jones was born on 11 July 1925 in Athens, McMinn County, Tennessee.1 As of after 1945,her married name was Bagwell. She married Harvey Greely Bagwell Jr., son of Harvey Greely Bagwell and Tennie Rebecca Vaden, after 1945. Clarene Jones died on 12 October 2011 at age 86.1 She was buried at Woodlawn Memorial Park and Mausoleum, Nashville, Davidson County, Tennessee.1 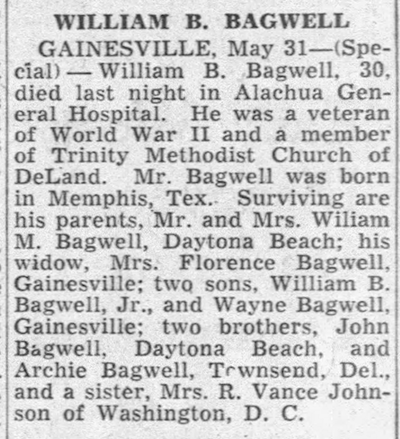 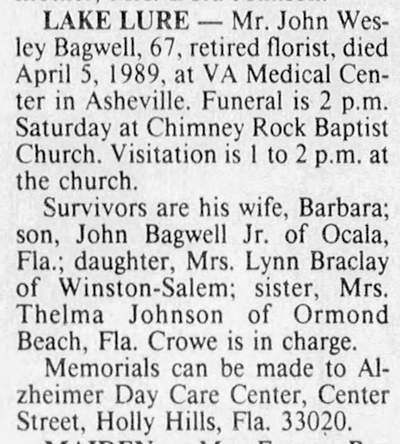