F, b. 1886, d. 22 April 1934
Annie Bell Smith was also known as Amy Belle Smith. She was born in 1886.1 As of after 1900,her married name was Bagwell.1 She married Jefferson Arnold Bagwell, son of William Henry Bagwell and Adaline "Addie Mae" Smith, after 1900.1 Annie Bell Smith died on 22 April 1934.1 She was buried at Broadmouth Church Cemetery, Honea Path, Abbeville County, South Carolina.1 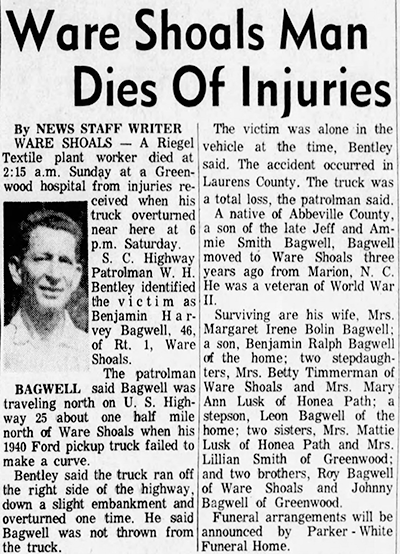 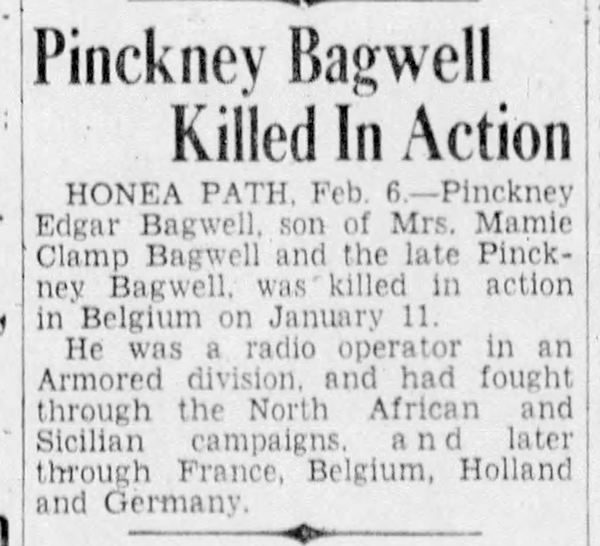 Pinkney Edgar Bagwell - Obituary
The Greenville News - February 8, 1945 - Page 12
Pinkney Edgar Bagwell was also known as Pinkney Eugene Bagwell. He was born on 17 May 1920 in South Carolina.1 He was the son of William Pinkney Bagwell and Mamie Clamp. He was a private first class in the 82nd Armored Reconnaissance Battalion, 2nd Armoured Division during World War II - Serial Number:14032615.1 Pinkney Edgar Bagwell died on 11 January 1945 at age 24 of wounds received in battle. Given the date of his death, I beleive this was the Battle of the Bulge.

The Battle of the Bulge

On 23 December, the German divisions attacked from the south and overran the 325th GIR holding the Baraque- Fraiture crossroads on the 82nd's southern flank, endangering the entire 82nd Airborne division. The 2nd SS Panzer's objective was to outflank the 82nd Airborne. It was not an attack designed to reach Peiper, but it was his last chance, nonetheless. If it did outflank the 82nd, it could have opened a corridor and reached the stranded yet still powerful Kampfgruppe. But the attack came too late.

On 24 December 1944, the 82nd Airborne Division with an official strength of 8,520 men was facing off against a vastly superior combined force of 43,000 men and over 1,200 armored fighting and artillery vehicles and pieces. Due to these circumstances the 82nd Airborne Division was forced to withdrawal for the first time in its combat history. The Germans pursued their retreat with the 2nd and 9th SS Panzer Divisions. The 2nd SS Panzer Division Das Reich engaged the 82nd until 28 December when it and what was left of the 1st SS Panzer Division Leibstandarte were ordered to move south to meet General Patton's forces attacking in the area of Bastogne. Some units of the 9th SS Panzer including the 19th Panzer Grenadier Regiment stayed and fought the 82nd. They were joined by the 62nd Volksgrenadier Division. The 9th SS Panzer tried to breakthrough by attacking the 508 and 504 PIR positions, but ultimately failed. The failure of the 9th and 2nd SS Panzer Divisions to break through the 82nd lines marked the end of the German offensive in the northern shoulder of the Bulge. The German objective now became one of defense.

On 3 January 1945, the 82nd Airborne Division conducted a counterattack. On the first day's fighting the Division overran the 62nd Volksgrenadiers and the 9th SS Panzer's positions capturing 2,400 prisoners. The 82nd Airborne suffered high casualties in the process. The attached 551st Parachute Infantry Battalion was all but destroyed during these attacks. Of the 826 men who went into the Ardennes, only 110 came out. Having lost its charismatic leader Lt. Colonel Joerg, and almost all its men either wounded, killed, or frostbitten, the 551 was never reconstituted. The few soldiers who remained were later absorbed into units of the 82nd Airborne.

After several days of fighting, the destruction of the 62nd Volksgrenadiers, and what had been left of the 9th SS Panzer Division was complete. For the 82nd Airborne Division the first part of the Battle of the Bulge had ended.1 He was buried at Broadmouth Church Cemetery, Honea Path, Abbeville County, South Carolina.1

Mrs. Morrow was born on September 20, 1909, in Stone Station, SC, a daughter to the late William Jeter Bagwell and Corrie (Jennings) Bagwell.

She was a member of Philadelphia Baptist Church.

Funeral service was held 11:00 a.m. Thursda, December 27, 2012 at Philadelphia Baptist Church, conducted by the Rev. Joshua C. Jennings and the Rev. Charles Eaton. Burial was in the church cemetery.

Memorial contributions could be made to either Family Life Center Fund or Cemetery Fund of Philadelphia Baptist Church, P. O. Box 220, Pauline, SC 29374.

Published in Spartanburg Herald-Journal from December 26 to December 27, 2012.1