F
Virginia Bagwell is the daughter of William Steadman Bagwell and Clara Brown.

M
Arthur Bagwell is the son of William Steadman Bagwell and Clara Brown.

F, b. circa 1834
Harriet R. Dobbins was born circa 1834 in Spartanburg County, South Carolina. As of before 1855,her married name was Bagwell. She married Berry Washington Bagwell, son of Wiley Hays Bagwell and Rebecca Taft, before 1855.

F, b. 1857
Mary M. Bagwell was born in 1857. She was the daughter of Berry Washington Bagwell and Harriet R. Dobbins. 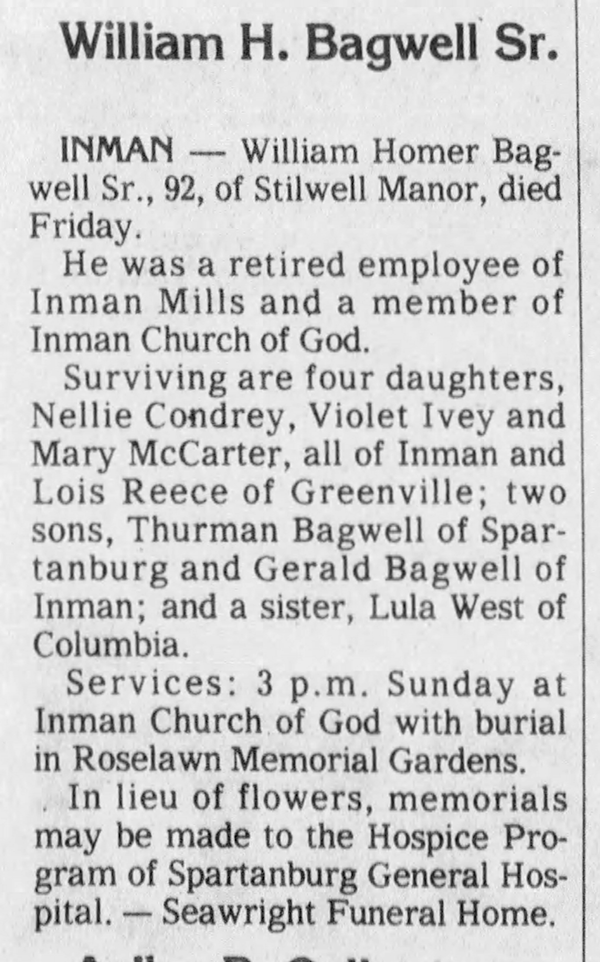 Live in Spartanburg more than 40 years; member of Inman Church of God.

A native of Spartanburg County, he was the husband of Francis Will Bagwell and son of the late William H. and Mabel Bagwell. He was retired from Jefferson Pilot Life Insurance Company and a member of Boiling Springs First Baptist Church.

Also surviving are a daughter, Sandra Chapman of Boiling Springs; a foster daughter, Leisa Ann Long of Spartanburg; two sons, Jami and Robbie Bagwell of the home; four sisters, Nellie B. Condrey, Violet B. Ivey and Mary B. McCarter of Inman and Lois B. Reece of Greeneville; a brother, Gerald Bagwell of Inman; three grandchildren, two great-grandchildren and one foster grandchild.

A native of Spartanburg County, she was the loving daughter of Walter and Ethel Compton Wall and the wife of the late Thurman W. Bagwell.

She was a member of Mountain View Baptist Church, where she was a former Sunday school teacher and was retired as a weaver from Inman and Arcadia Mills after over 32 years of service. She also had worked as a Daycare worker. She enjoyed baking, was an avid gardener and loved children. Strong in her faith, she was a straight forward person who was devoted to her family.

She is preceded in death by her parents; her husband; three brothers and a sister.

A funeral service will be held at 4 pm, Sept. 13th at Eggers Funeral Home and Crematory of Chesnee with Pastor Tyler Kirby officiating. Interment will be held at 11 am, Sept. 14th in Springhill Memorial Gardens by the Rev. Bob Beuhl. The family will receive friends Sunday from 2:30 to 4 pm at the funeral home before the service and at other times her daughters residence.

Sandy was born on March 3, 1945 in Roswell, New Mexico to the late Thurman Woodrow and Sarah Frances Wall Bagwell. She had retired from Smith Drugs and was a member of Northbrook Baptist Church.

Born in Spartanburg County, South Carolina, Tuesday, May 25, 1920, she was the daughter of the late William H. and Maybelle (Johnson) Bagwell and widow of Richard Samuel Condrey (1920-2002). She was a member of the Church of God and a homemaker.

F, b. 28 April 1936, d. 27 September 2011
Mary Lou Bagwell was born on 28 April 1936 in Inman, Spartanburg County, South Carolina.1 She was the daughter of William Homer Bagwell and Maybelle Johnson. As of after 1945,her married name was Wilson. Mary Lou Bagwell married David R. Wilson after 1945. As of before 1984,her married name was McCarter. Mary Lou Bagwell married (?) McCarter before 1984. Mary Lou Bagwell died on 27 September 2011 in Inman, Spartanburg County, South Carolina, at age 75
Mary was the daughter of W. H. (Buddy) Bagwell and Maybelle (Johnson) Bagwell of Inman. She was raised in the Church of God and was a Christian.

Throughout the course of her working life she was an employee of Raycord, Inc. and Lyman Finishing Co., managed the business office of McCarter Paint Contracting for 15 years, owned and operated Mary's Dark Skin Den, and was a registered caregiver for Interim Healthcare.

She served her community as a Notary Public and a Red Cross volunteer.

She loved animals, her favorite hobby was reading, but her passion was her love for her husband, children, grandchildren and great grandchildren. She was a wife, a mother, a grandmother and a great grandmother who showered her family with love and support; never judgmental always supportive.

She was adored by all who knew her and will live in their hearts for eternity.

Born in Spartanburg County, she was a daughter of the late Jesse and Cynthia Belcher Mason, retired from Startex Mill and was a member of Jackson Baptist Church.

Survivors: A number of nieces and nephews.

F, b. March 1896
Louisa Catherine Bagwell was born in March 1896. She was the daughter of Berry Washington Bagwell Jr. and Cassie Tabitha Barker.

F, b. May 1892
Rebecca Bagwell was born in May 1892. She was the daughter of Berry Washington Bagwell Jr. and Cassie Tabitha Barker.