Children of Frederick "Fred" A. Bagwell and Gloria Bernice Klingzell

F, b. 14 May 1927, d. 19 August 2017
Gloria Bernice Klingzell was born on 14 May 1927 in Denver, Colorado.1 As of circa 1948,her married name was Bagwell. She married Frederick "Fred" A. Bagwell, son of Homer Albert Bagwell and Marian Emma Chandler, circa 1948. Gloria Bernice Klingzell died on 19 August 2017 at age 90
Gloria Bernice Bagwell passed away August 19, 2017 peacefully after living life to its fullest.
Gloria was born in Denver, Colorado on May 14, 1927 to Leonard and Bernice Klingzell. She was a devoted wife, mother, grandmother, great grandmother and follower of Christ.
As a teenager, Gloria moved from Colorado to Riverside, California with her parents where she eventually met the love of her life, Fred Bagwell, who preceded her in death in 2011. They were married 63 years and raised three children, Cindi (Mike) Holt, Ron (Roxanne) Bagwell and Lisa (Christer) Fiege-Kollmann.
Her warmth and kindness will be remembered by all who knew her. Gloria is survived by her three children, five grandchildren and two great grandchildren. The memorial service will be held at 3:30pm on Saturday, September 30, 2017 at Saint Matthew Ecumenical Catholic Church, 1111 Town & County Road, Orange.
In lieu of flowers, the family would appreciate contributions to Saint Matthew Ecumenical Catholic Church; to Wilshire Avenue Community Church, 212 E. Wilshire Ave. Fullerton, CA 92832; or the charity of your choice in Gloria's memory.2
She was buried at Olivewood Cemetery, Riverside, Riverside County, California.2

Children of Gloria Bernice Klingzell and Frederick "Fred" A. Bagwell

F, b. December 1855, d. 1919
Sallie H. Spears was born in December 1855 in South Carolina.1 As of 1877,her married name was Bagwell. She married George Washington Boyd Bagwell, son of James Madison Bagwell and Martha Murrell, in 1877. Sallie H. Spears died in 1919.1 She was buried at Brigham Cemetery, Campbell, Hunt County, Texas.1 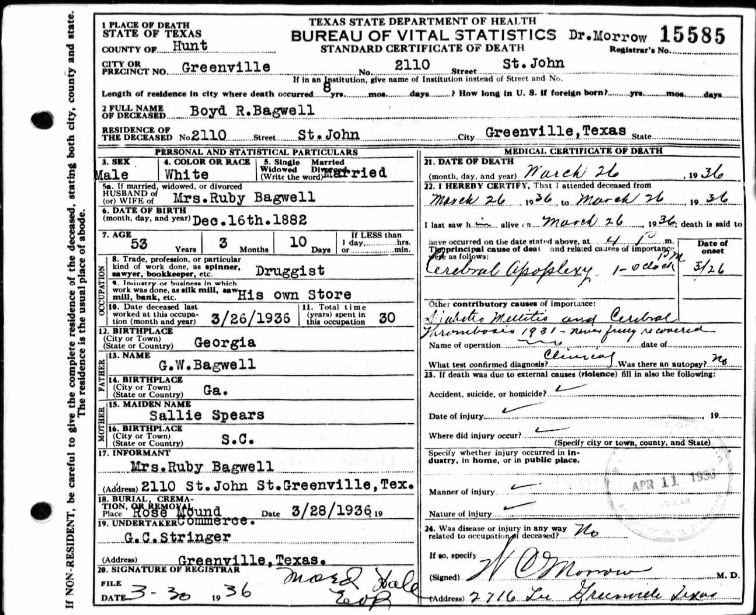 BAGWELL, JIMMY MELVIN, age 69, of Corner, AL, passed away on Saturday, July 13, 2002. He was a member of Grace Baptist Church, Sumiton, AL. He was a graduate of Corner High School and Auburn University. He was an U.S. Army Veteran (1st Lt., Tank Division). He was the owner and operator of Jim Bagwell Farms for 44 years. He was preceded in death by parents, Hoyt and Lucille Bagwell; and granddaughter, Michelle Rice.

He was the son of Virgil H. Bagwell and Melva L. York.1
He was buried at Oakwood Memorial Gardens, Gardendale, Jefferson County, Alabama.

Betty worked in partnership with her husband for many years in the development and success of Jim Bagwell Farms. Additionally, she worked in the pharmacy department of Carraway Hospital in Birmingham, AL. She was also an award-winning sales associate at Rich’s Department Store in Birmingham. Betty loved travel and took particular pride in the landscaping of her home in Empire, AL. A graduate of Warrior High School, she was active in the alumni association there. She viewed herself most importantly as a loving mother to Cynthia and James, and as grandmother to Michelle. Known for her grace, style, and kindness, Betty will be deeply missed in the community where she lived since 1956.

Services for Betty will be held Saturday, July 2, 2022 at Ridout's Gardendale Chapel, 2029 Decatur Highway, Gardendale, AL 35071. A time of visitation will begin at 10:00 AM; funeral service at 11:00 AM: followed by her burial at Oakwood Memorial Gardens, Gardendale, AL.

Fond memories and expressions of sympathy may be shared at www.ridoutsgardendalechapel.com for the Bagwell family.

She was buried on 2 July 2022 at Oakwood Memorial Gardens, Gardendale, Jefferson County, Alabama.

Cynthia Jo Bagwell was born on 29 May 1958.1 She was the daughter of Jimmy Melvin Bagwell and Betty Jo Harden. As of after 1975,her married name was Moore. Cynthia Jo Bagwell married Calvin Wayne Moore after 1975. As of after 1976,her married name was Brakefield. Cynthia Jo Bagwell married (?) Brakefield. Cynthia Jo Bagwell died on 4 September 2013 at age 55 Cynthia Jo Bagwell Brakefield, age 55 of Empire died Wednesday, September 4, 2013 at her residence. Memorial services will be 2:00 PM Saturday, September 7, 2013 at Bell Sumiton Chapel with Rev. Doug Tate officiating. The family will receive friends at the funeral home from 1:00 to 2:00 PM Saturday prior to the service. In lieu of flowers the family requests that donations be made to the American Cancer Society.
Mrs. Brakefield graduated from Corner High School and received her Bachelor of Science in nursing from Samford University. She was employed at Surgical Care Affiliates Outpatient Surgery Center for 15 years. An avid sports fan and animal lover, she rode horses as a teenager. She also studied music and remained connected to the arts throughout her life. Preceding her in death were her daughter, Erica Michelle Rice and father, Jimmy Bagwell.