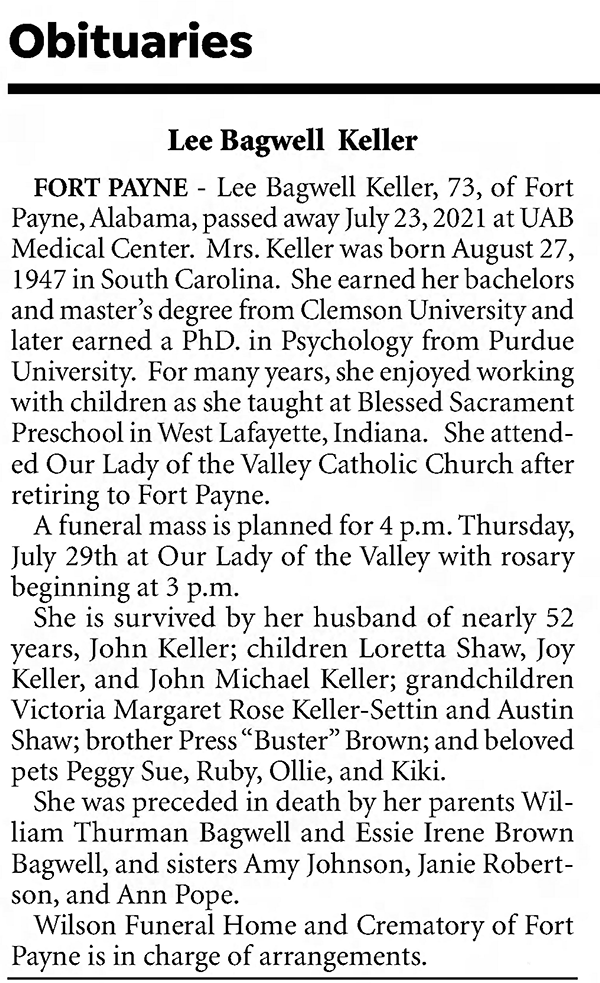 Lee (Bagwell) Keller - Obituary
Journal and Courier (Lafayette, IN) - Page A06
Lee Bagwell was born on 27 August 1947 in South Carolina. She was the daughter of William Thurman Bagwell and Essie Irene Anglin. As of circa 1969,her married name was Keller. Lee Bagwell married John Keller circa 1969. Lee Bagwell died on 23 July 2021 in Birmingham, Jefferson County, Alabama, at age 73. She was buried at Our Lady of the Valley Cemetery, Fort Payne, Alabama.

F, b. circa 1877
Martha Susan Rury was born circa 1877. As of 1896,her married name was Jackson. She married George Franklin Jackson in 1896 at Randolph County, Illinois.

F, b. July 1961, d. 8 September 2022
Kimberly Dawn Glenn was born in July 1961 in Greenville, Greenville County, South Carolina. She was the daughter of Kenneth D. Glenn. As of after 1979,her married name was Griffith. Kimberly Dawn Glenn married Thomas A. Griffith, son of Thomas Arthur Griffith and Priscilla B. Meek, after 1979. Kimberly Dawn Glenn died on 8 September 2022 at age 61 [:CR:]Kimberly Glenn Griffith, 61, went to be with her Lord and Savior, Jesus Christ, September 8, 2022.
A native of Greenville, a daughter of Iris Smith Glenn and the late Kenneth D. Glenn; she was a graduate of Bob Jones University, was an employee for 38 years of Fluor Corporation in Greenville, South Carolina, and a founding member of Blue Ridge Presbyterian Church where she was devoted to serving Christ and the membership. Kimberly had a selfless devotion to her family and friends. Her love of music, singing, and playing the flute ministered to her friends and family through the years. We will dearly miss and remember her beautiful soul.
Surviving are her husband, Rev. Bud Griffith of the home; one son and daughter-in-law, Matthew and Melissa Griffith of Taylors; one sister and brother-in-law, Kathy and Wes Hulsey of Powdersville and was blessed with many nieces and nephews.
A Celebration of Life will be held 3:00 p.m. Sunday, September 11, 2022; at Blue Ridge Presbyterian Church conducted by Pastor Dean Louw and Rev. Carlos Salinas.
Honorary Escort will be Mark Steadman, Steve Bailey, David Motte, Luke Stoia, Matthew Feeney, Bob Poock, Matt Bloomer, Tim White and Bill Kabakjian.
Online condolences may be made at www.thewoodmortuary.com.

Child of Kimberly Dawn Glenn and Thomas A. Griffith

Children of Thomas Arthur Griffith and Priscilla B. Meek 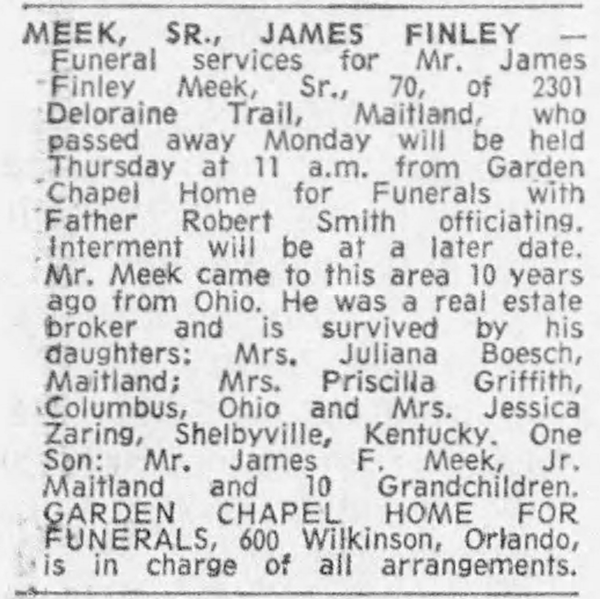