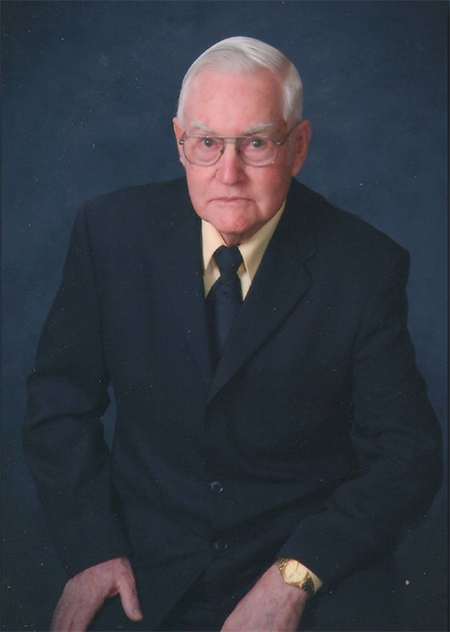 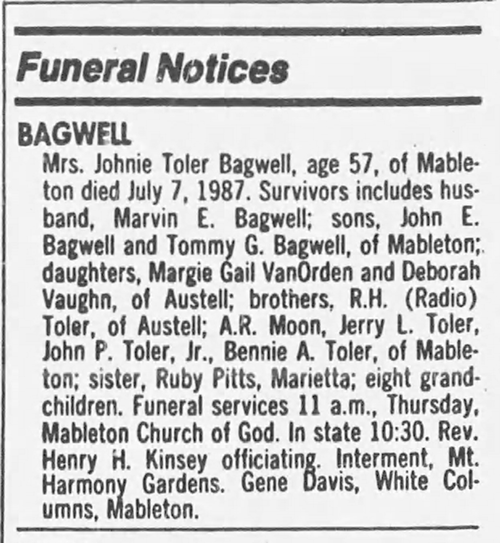 F, b. 19 October 1922, d. 22 May 2005
Lois Edna Bagwell was born on 19 October 1922 in Gray Court, Laurens County, South Carolina.1 She was the daughter of Ivy Sylvester Bagwell and Macie Belle South. As of after 1945,her married name was Shead. Lois Edna Bagwell married John Bernis Shead after 1945. Lois Edna Bagwell died on 22 May 2005 in Sumter, Sumter County, South Carolina, at age 82
She was previously married to Grover Alton Meeler who is buried at Highland Home Baptist CHurch in Gray Court ,S.C.
in the Bagwell Family Plot. Her 2nd marriage was to John B. Shead who died in 1995. He is buried by her. She had two children, Grover Lamar Meeler and Alton Sylvester Meeler, She was the daughter of Ivy Sylvester and Macie South Bagwell.1
She was buried at Oconee Memorial Park and Mausoleum, Seneca, Oconee County, South Carolina.1

F, b. 1 September 1927, d. 17 March 2018
Julia Bagwell was born on 1 September 1927 in Gray Court, Laurens County, South Carolina.1 She was the daughter of Ivy Sylvester Bagwell and Macie Belle South. As of after 1945,her married name was Hill. Julia Bagwell married David William Hill after 1945. Julia Bagwell died on 17 March 2018 at age 90.1 She was buried at Friendship Baptist Church Cemetery, Gray Court, Laurens County, South Carolina.1