Betty Annette Bagwell was born on 25 August 1944 in South Carolina. She was the daughter of John William Bagwell and Myrtle Cloda Edwards. As of after 1960,her married name was White. Betty Annette Bagwell married (?) White after 1960. Betty Annette Bagwell died on 19 October 2005 at age 61
October 19, 2005 1:00 am
Betty A. White, 61, of 120 Eagle Run Drive, Cordova, died Wednesday, Oct. 19, 2005, at her residence.
Funeral services will be held at 3 p.m. Friday, Oct. 21, at Thompson Funeral Home Chapel in Orangeburg, with the Rev. Virgil Bagwell officiating. Burial will be in Crestlawn Memorial Gardens in Orangeburg.
Pallbearers will be her nephews.
Ms. White was born Aug. 25, 1944, in Greenwood County, a daughter of the late John W. Bagwell and the late Cloda Edwards Bagwell. She was a member of the Church of God. She was employed by AYP Electrolux for 30 years. She was preceded in death by two brothers, John Curtis Bagwell and Ronnie Eugene Bagwell, and one sister, Linda Westmoreland.
Survivors include one daughter, Patricia A. Fogle of Cordova; one son, Harold White Jr. of Orangeburg; four grandchildren; two great-grandchildren; one sister and brother-in-law, Thelma and J.V. Maroney of Leesville; one brother and sister-in-law, the Rev. Virgil and Darlene Bagwell; 21 nephews and nieces; and a number of cousins.
Friends may call at the residence, 120 Eagle Run Drive, Cordova, and at the funeral home.
Visitation will be from 7 to 9 p.m. Thursday at Thompson Funeral Home, Inc. in Orangeburg. Memorials may be made to a charity of one’s choice. She was buried at Crestlawn Memorial Gardens, Orangeburg, Orangeburg County, South Carolina. 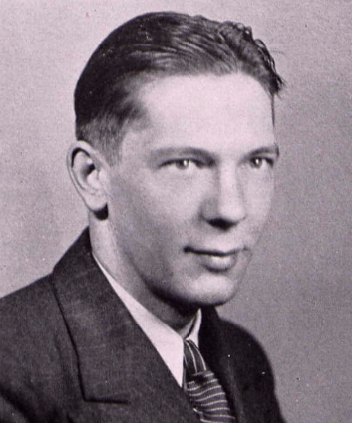 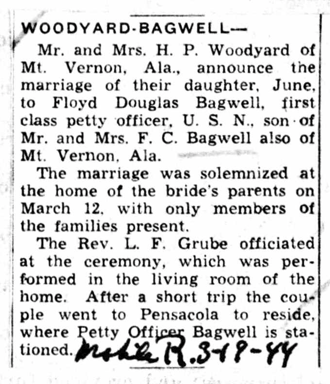 Richard Bagwell was born on 21 January 1929 in Howell, Vaderburgh County, Indiana. He was the son of Floyd Carlisle Bagwell and Sarah Eppie Webb. Richard Bagwell lived in 1940 in Mobile, Alabama. He died on 30 October 2007 at age 78.