Harrison Garey Bagwell, Sr. (December 6, 1913 – December 2, 1973) was an attorney in his native Baton Rouge, Louisiana, who was the Republican nominee for governor of Louisiana in 1952. Bagwell was only the second Republican to have sought the governorship of Louisiana since 1924.

Bagwell was a son of Arthur D. Bagwell (1878-1955), a native of Lincoln Parish, and the former Birdie Mae Harrison (1878-1961), a native of Houma in Terrebonne Parish. The couple died in Oak Grove in West Carroll Parish and is interred there at Oak Grove Cemetery.

One of the Bagwell daughters, Bonnie Bagwell Messer (born September 1954) a registered Republican voter in Pointe Coupee Parish, recalls how her father treated the neighborhood children at their home in University Acres each Halloween to hot dogs, chili, and Kool-Aid. On the occasion of the 40th anniversary of Bagwell's death, Messer said, "Our house was THE place to go, and he fed everyone. It has been forty years since his last Halloween at our house ... I hope all our neighbors who trick-or-treated at our house will remember him this Halloween and the love he had for Halloween and them."

Harrison Garey "Gary" Bagwell, Jr. (1937-1985), served in the United States Navy aboard the transport ship, U.S.S. Caddo Parish during the Vietnam War. His letters describe the Viet Cong, military operations, and the people and landscape of South Vietnam and Taiwan. His papers are in the Louisiana and Lower Mississippi Valley Collections of the LSU Archives. There is also a special feature in the archive from the New Orleans Item on the Louisiana Republican Party in 1952.

In the gubernatorial general election held on April 22, 1952, Bagwell polled 4,958 votes (4 percent) of the vote statewide in a low-turnout contest against the Democrat Robert F. Kennon, a judge from Minden, who received 118,723 (96 percent). Bagwell reached double digits in only three parishes, St. James (13 percent), Iberia (12.5 percent), and his own East Baton Rouge (11.8 percent). In three parishes, Concordia, DeSoto, and Tensas, Bagwell received no votes. Bagwell was the first Republican candidate for governor since 1928, when Etienne J. Caire, a businessman from Edgard in St. John the Baptist Parish, polled 4 percent of the vote, the same as Bagwell, in Caire's race against Huey Pierce Long, Jr. Bagwell's gubernatorial showing was far below that just four years earlier of Clem S. Clarke, a Shreveport oilman who in 1948 polled just over 100,000 votes in a United States Senate campaign against Russell B. Long. Clarke was the first member of the GOP to seek a Senate seat from Louisiana under the Seventeenth Amendment to the United States Constitution. By 2015, Republicans for the first time held both Senate seats from Louisiana.

Bagwell said that his primary goal in running for governor was to establish a viable two-party system in Louisiana; he contended that the state Republican party was being deliberately held back by its traditional leaders so that they could maintain their control over the party organization. As the representative from Louisiana's 6th congressional district, Bagwell was a delegate to the 1952 Republican National Convention, which met in Chicago and nominated Dwight Eisenhower, with Richard M. Nixon for vice president. Bagwell assisted John Minor Wisdom in making the case for seating the pro-Eisenhower delegation rather than the pro-Taft delegation favored by the entrenched state party leadership; their success was instrumental in securing the nomination for Eisenhower. Governor Kennon subsequently endorsed the Eisenhower-Nixon ticket, which though successful nationally, lost the Louisiana electoral vote that year at a time when the state was solidly Democratic in orientation, but would by the 21st century become predominantly Republican.

Bagwell sought a federal judgeship but was not selected by the Eisenhower administration. Along with then incoming state party chairman LeRoy Smallenberger of Shreveport, Bagwell was an alternate delegate to the 1960 Republican National Convention, which also met in Chicago and nominated the Nixon-Lodge ticket. George W. Reese, Jr., a New Orleans lawyer, who carried the Republican banner against U.S. Senator Allen J. Ellender that year, was a delegate to the Chicago convention, along with another Shreveport Republican figure, Tom Stagg.

After the 1964 presidential election saw Barry Goldwater become the first Republican to carry the Deep South while losing nearly everywhere else, Bagwell called for an "overhaul" of the party leadership, arguing that more moderate policies were necessary for party success. The more conservative party leaders, including Floyd O. Crawford, the defeated Republican candidate for U.S. representative from Louisiana's 6th congressional district, and Morton Blackwell, a still active Republican party official in the state of Virginia, criticized Bagwell for his comments: They "seem to come from another world and another era" and suggested that "if Bagwell wishes to be a liberal, then he should become a Democrat."

Bagwell died in 1973 four days before his 60th birthday. He and his wife, who predeceased him by two years, are interred at Resthaven Gardens of Memory in Baton Rouge. Bagwell's papers, dated 1941 to 1969, which cover his Republican Party activities, are, like those of his son, available through the LSU Archives.1 He was buried at Resthaven Gardens of Memory and Mausoleum, Baton Rouge, East Baton Rouge Parish, Louisiana.1 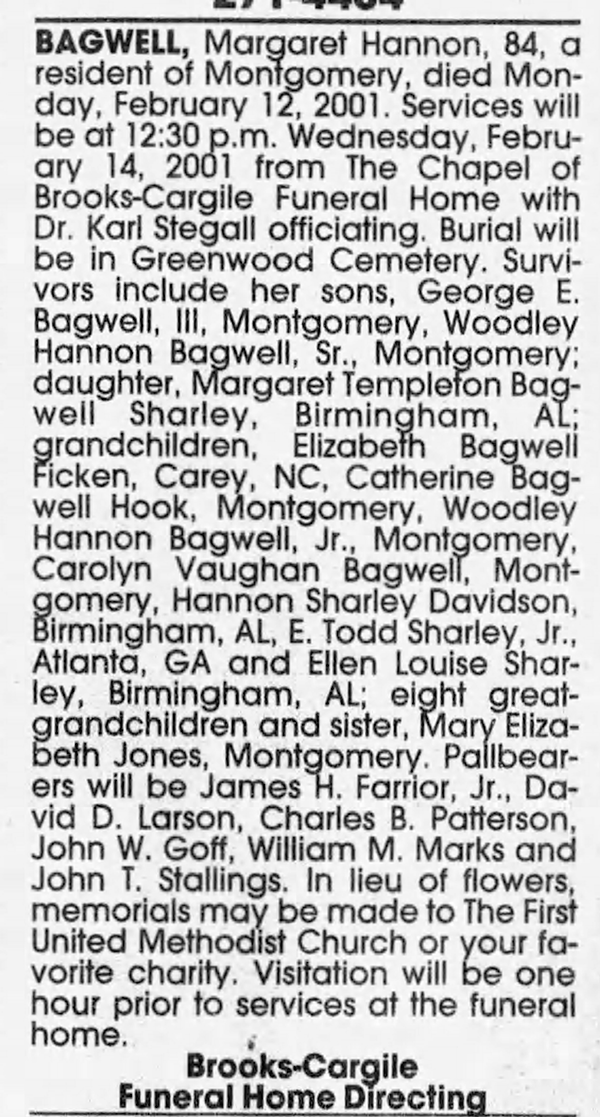 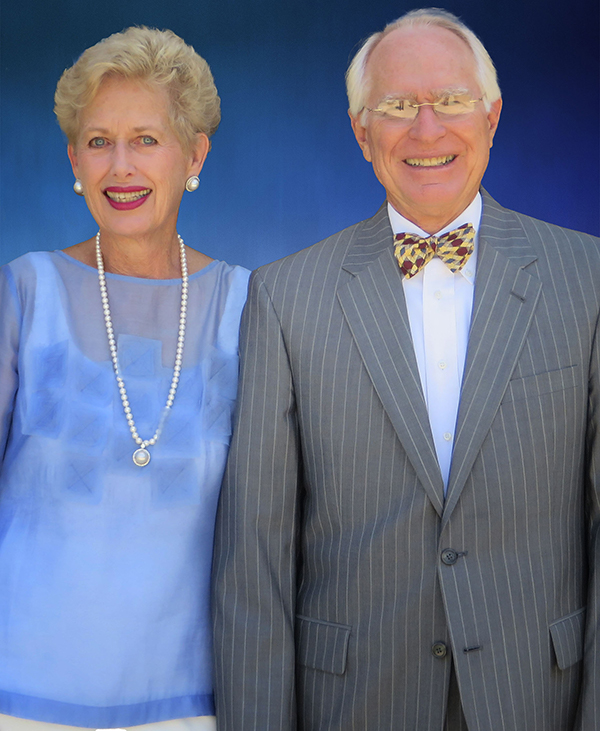 Edna Sue Bagwell was born in 1932 in Georgia.1 She was the daughter of James Franklin Bagwell and Susie Owens. As of after 1950,her married name was Bearden.2 Edna Sue Bagwell married James Carl Bearden Jr. after 1950.2 Edna Sue Bagwell lived in 1951 in Atlanta, Georgia. She died on 25 February 2010 in Fulton County, Georgia,
Mrs. Edna Sue Bearden age 78, of Alpharetta, died February 25, 2010. Mrs. Bearden was a gifted piano player and loved to sing in the choir at Northside Baptist Church where she was a member. She also had a love and passion for antiques.

Survivors include her daughter Cathy Cook and her husband Michael E. of Decatur; sisters Edith Cathcart of FL, Elise Webb of Clarksville; grandchildren David Cook of Decatur, Katie Holt and her husband John of Dalton; aunt Lelia Morris of Macon; and several nieces and nephews.

Funeral Services will be on Sunday Feb 28 2010 at 3 PM in the funeral home chapel with Dr. Dan Parker to officiate. Interment to follow at Green Lawn Cemetery. The family will receive friends on Saturday from 3-5 PM at the funeral home. Northside Chapel Funeral Directors and Crematory, Roswell/Alpharetta, is assisting the Bearden family.1
She was buried at Green Lawn Cemetery, Roswell, Fulton County, Georgia.1