F, b. 28 October 1931, d. 24 January 2018
Marie "Johnnie" Mayfield was born on 28 October 1931. As of after 1947,her married name was Bagwell. She married William Bagwell, son of Clarence A. Bagwell and Ada Smith, after 1947. Marie "Johnnie" Mayfield died on 24 January 2018 at age 86
Ingram Funeral Home announces the death of Marie Mayfield Bagwell on Wednesday, January 24, 2018. Marie was born October 28, 1931 to Albert and Luna Mayfield. She is preceded in death by her parents; her brothers, Lawrence and Leroy Mayfield; an infant sister, Myrtle Lee; and mother and father-in-law, Ada and Clarence Bagwell.

She is survived by her husband of 67 years, Bill Bagwell; three children, Debbie and Mike Fowler, Gwen and Ron Stover, Darryl and Laura Bagwell. She is survived by 7 seven grandchildren, Meredith and Blake Edwards, Laura and Timothy Graham, Jacob and April Bagwell, Isaac and Sara Bagwell, Kate and Seth Campbell, Janice and Flynn Vaughan, Peggy and Chad Blackwell and David Stover; daughter-in-law, Amelia and Pat Wolfer; several great and great great grandchildren; and a number of nieces and nephews.

Marie was well known as "Johnnie" in the community, and was a longtime member of Pleasant Grove Baptist Church. Here she was once the pianist and she had a beautiful voice as well. She was a simple person, gardener, a homemaker, a great cook, a seamstress, hardworking longtime wife, mother, and friend to anyone who needed her; her passion was helping others and being a caregiver for others; always putting her self last. Anyone who knew her will greatly miss her.
She was buried at Pleasant Grove Cemetery, Gainesville, Forsyth County, Georgia.

Debbie Bagwell is the daughter of William Bagwell and Marie "Johnnie" Mayfield.

Gwen Bagwell is the daughter of William Bagwell and Marie "Johnnie" Mayfield.

Darryl Bagwell is the son of William Bagwell and Marie "Johnnie" Mayfield. 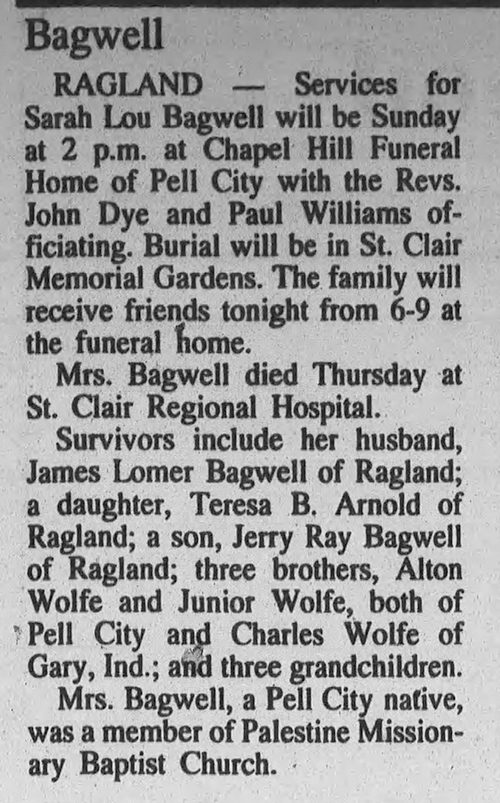 F, b. circa 1854
Nancy Fox was born circa 1854 in Mississippi. She was the daughter of Thomas J. Fox and Julia Ann Dick.

M, b. 1869, d. 22 April 1892
Columbus Fox was born in 1869 in Jefferson County, Illinois, CB Fox was victim of a hunting accident when he dropped a pistol he was hunting with and it discharged. He died the next day. The accident occured a few miles above Amity.
SOURCE: Southern Standard Arkadelphia, Arkansas, April 22, 1892. He was the son of Thomas J. Fox and Julia Ann Dick. Columbus Fox died on 22 April 1892 in Pike County, Arkansas.

F, b. circa 1876
Gabriella Fox was born circa 1876 in Illinois. She was the daughter of Thomas J. Fox and Julia Ann Dick.

Buddy was a fun loving, outgoing, happy person. He was loved by all that knew him and was considered to be a gift from God by those who were close to him. All of the women inhis life will miss his special 'winks'. Buddy taught people to smile, through his beautiful smile, and to be strong no matter what was to be.

Buddy is survived by his wife of 44 years, Linda Morgan Bagwell; his sister, Alice Harper of Alma; a brother, Dale Bagwell and his wife Peggy of Blue Springs, Missouri; a niece, Amanda Bagwell of Lee's Summit, Missouri and nephew, Adam Bagwell of St. Louis, Missouri, as well as three sisters-in-law, Mary and Betty Morgan, both of Muldrow and Nancy Cramm of Bella Vista, Arkansas.

F
Alice Bagwell is the daughter of Justin Bagwell and Bessie Marie Durham.

M
Dale Bagwell is the son of Justin Bagwell and Bessie Marie Durham.