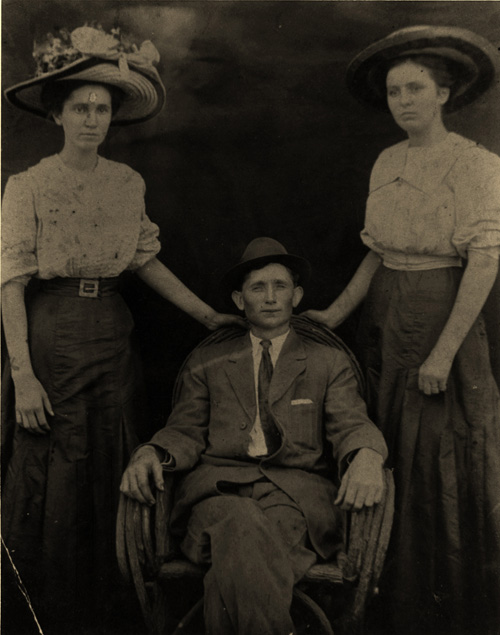 Eula Kennedy was born on 10 November 1888 in Alabama.1 As of after 1907,her married name was Bagwell. She married John Vineyard Bagwell, son of John Cicero Bagwell and Martha Bradley Smith, after 1907.2,3 Eula Kennedy died on 15 September 1961 in Marshall County, Alabama, at age 72.1 She was buried at Brashiers Chapel, Arab, Marshall County, Alabama.1 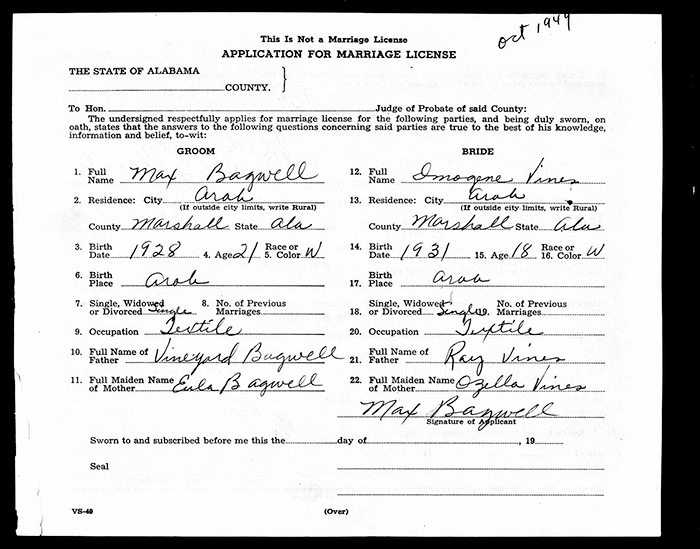 Children of Louise Shelton and Quinton B. Bagwell

F, b. 1865
Honea Bagwell was born in 1865. She was the daughter of Nathaniel Robbins Bagwell and Sarah Elizabeth Rogers.

F, b. circa 1814
Gillet Gunnells was born circa 1814 in South Carolina.1,2 Her married name was Bagwell. She married Anderson Bagwell, son of Frederick Bagwell and Winfred Ellis, before 1834.1

F, b. 5 August 1849, d. 10 June 1941
Nancy Ellen Turbyfill was also known as Nannie Tuberfille. She was born on 5 August 1849 in South Carolina.1 As of 30 March 1866,her married name was Bagwell. She married William Anderson Bagwell, son of Anderson Bagwell and Gillet Gunnells, on 30 March 1866. As of before 1886,her married name was Bagwell. Nancy Ellen Turbyfill appeared on the 1900 United States Federal Census for Justice Precinct 4, Wise County, Texas, enumerated on 12 June 1900.1 She died on 10 June 1941 in Springtown, Parker County, Texas, at age 91. She was buried at Jay Bird Cemetery, Reno, Parker County, Texas.

Joseph Bagwell was born on 30 December 1818 in Laurens County, South Carolina. He was the son of William Hitch Bagwell and Elizabeth Wallace Rowe. Joseph Bagwell died on 10 March 1860 at age 41.

James Wiley Bagwell was born in 1824 in Laurens County, South Carolina. He was the son of William Hitch Bagwell and Elizabeth Wallace Rowe. He enlisted as a private in 13 South Carolina Infantry, Company I. 13th Infantry Regiment was organized in July, 1861, at Lightwoodknot Springs, near Columbia, South Carolina.


Many of the men were recruited in Greenville, Newberry, Abbeville, and Spartanburg counties. After three months of instruction at Lightwoodknot Springs the unit moved to the coast of South Carolina near Pocotaligo. In April, 1862, it was ordered to Virginia and assigned to General Gregg's and McGowan's Brigade. The 13th was prominent in the campaigns of the Army of Northern Virginia from the Seven Days' Battles to Cold Harbor, then continued the fight in the Petersburg trenches and around Appomattox. It took 413 effectives to Gaines' Mill and 342 to Frayser's Farm, lost 26 killed and 118 wounded at Second Manassas, had 5 killed and 24 wounded at Ox Hill, and lost 3 killed and 52 wounded at Fredericksburg. The unit sustained 91 casualties at Chancellorsville, 130 of 390 at Gettysburg, 63 at The Wilderness, 86 at Spotsylvania, 49 from May 12 to July 1, 1864, 42 at Deep Bottom, 32 at Fussell's Mill, and 34 at Poplar Springs Church. It surrendered 13 officers and 183 men. The field officers were Colonels Benjamin T. Brockman, Oliver E. Edwards, and Isaac F. Hunt; Lieutenant Colonels P. Ludlow Calhoun, T. Stabo Farrow, and William Lester; and Majors David R. Duncan and Joseph L. Wofford.1 James Wiley Bagwell married Mary Ann Samantha Isham, daughter of John A. Isham and Samantha Jane Henderson, on 18 March 1862 at Floyd County, Georgia.2 James Wiley Bagwell died on 9 December 1862 Died in the Civil War. He was buried at Old City Cemetery, Lynchburg, Lynchburg City, Virginia.3,1

Nancy Bagwell was born in 1825 in Laurens County, South Carolina. She was the daughter of William Hitch Bagwell and Elizabeth Wallace Rowe. As of circa 1844,her married name was Medlock. Nancy Bagwell married Wesley Kris Medlock circa 1844. Nancy Bagwell died on 11 May 1918 in Bright Star, Miller County, Arkansas.

65th Infantry Regiment was organized during the spring of 1863 using the infantry battalion of Smith's Georgia Legion as its nucleus. Some of the men were from Gilmer and Floyd counties. After serving in East Tennessee the unit was attached to J.H. Kelly's, J.K. Jackson's, and Gist's Brigade, Army of Tennessee. The 65th fought with the army from Chickamauga to Nashville, then was active in North Carolina. In December, 1863, it contained 291 men and 226 arms but was further reduced when it surrendered in April, 1865. The field officers were Colonels John S. Fain, William G. Foster, Robert H. Moore, and Sumner J. Smith; Lieutenant Colonel Jacob W. Pearcy; and Major Samuel F. Williams. Larkin B. Bagwell died on 19 March 1863 in Clinton, Hinds County, Mississippi.

Child of Larkin B. Bagwell and Mary A. R. Prewitt

Sarah Bagwell was born in 1832 in Laurens, Laurens County, South Carolina. She was the daughter of William Hitch Bagwell and Elizabeth Wallace Rowe. Sarah Bagwell died on 11 May 1918 in Bright Star, Miller County, Arkansas.