F, b. 14 December 1893, d. 23 July 1974
Elizabeth Della Freeman was born on 14 December 1893 in South Carolina.1 As of before 1909,her married name was Bagwell. She married Tandy Walker Bagwell, son of William Henry Bagwell and Martha Thompson, before 1909. Elizabeth Della Freeman died on 23 July 1974 at age 80.1 She was buried at Arial United Methodist Church Cemetery, Arial, Pickens County, South Carolina.1

Sanford Bagwell is the son of William Henry Bagwell and Martha Thompson.

Lewis Bagwell is the son of William Henry Bagwell and Martha Thompson.

Lonnie Leon Bagwell was born on 13 October 1913 in Carnesville, Franklin County, Georgia.1 He was the son of Tandy Walker Bagwell and Elizabeth Della Freeman. Lonnie Leon Bagwell married Hazel Willene Medlin before 1939. He served as a Corporal in the United States Army during World War II. He was a truck driver for the 487th Bomb Group.

The 487th Bomb Group began operations as preparations for D-Day were reaching their crescendo and played their part by bombing airfields in northern France. Like the 486th Bomb Group, the 487th switched to B-17 Flying Fortress for missions from 1 August 1944 and undertook strategic missions against targets in Germany. The Group led the largest Eighth Air Force mission of the war, 24 December 1944, when clear weather led to a concerted attack by more than 2,000 bombers on airfields and communication sites in western Germany.

The nickname "Gentlemen From Hell" has only been used in connection with the Group since the 487th Bomb Group Association was formed in 1967. It was not an official wartime nickname. The "Gentlemen From Hell" patch was used by a very few members of the 487th Bomb Group at Alamogordo, New Mexico during training Jan–Mar 1944, and during the early days of operations at Lavenham, England. Most veterans of the 487th Bomb Group knew nothing about it during the war.1 Lonnie Leon Bagwell died on 9 November 1984 in Easley, Pickens County, South Carolina, at age 71.1 He was buried at Greenlawn Memorial Park, Easley, Pickens County, South Carolina.1

Eddie Mae (Bagwell) Morton's Obituary
The Greenville News, May 19, 2003 - Page 12
Eddie Mae Bagwell was born on 21 April 1917 in Georgia. She was the daughter of Tandy Walker Bagwell and Elizabeth Della Freeman. As of before 1940,her married name was Morton. Eddie Mae Bagwell married Emerson Govnor Morton before 1940. Eddie Mae Bagwell died on 17 May 2003 at age 86. She was buried at Hillcrest Memorial Park, Pickens, Pickens County, South Carolina.

Biddy Bagwell is the daughter of Tandy Walker Bagwell and Elizabeth Della Freeman. 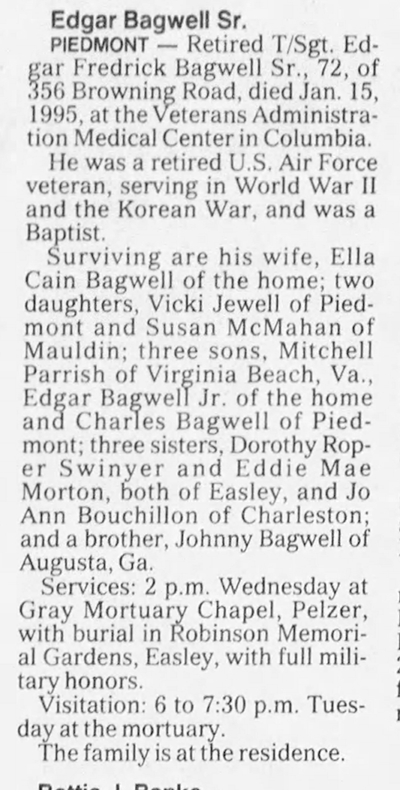 F, b. June 1893
Jennie Bagwell was born in June 1893 in South Carolina. She was the daughter of James Lewis Bagwell and Beulah Boggs.

M, b. 17 September 1920, d. 30 November 1994
Samuel Clarence Brackens was born on 17 September 1920 in South Carolina. He married Geneva Bagwell, daughter of William Earl Bagwell and Viola Nix, after 1938. He served in the US Navy. Samuel Clarence Brackens died on 30 November 1994 in Greenville County, South Carolina, at age 74.

M, b. April 1900
Lewis F. Bagwell was born in April 1900 in Georgia. He was the son of James Lewis Bagwell and Beulah Boggs.

F, b. 4 January 1898, d. 3 January 1980
Beulah Olliebell O'Donald was born on 4 January 1898 in Georgia.1 As of after 1916,her married name was Bagwell. She married Lawrence Clayton "Bud" Bagwell, son of James Lewis Bagwell and Beulah Boggs, after 1916. Beulah Olliebell O'Donald died on 3 January 1980 in Seneca South, Oconee County, South Carolina, at age 81.1 She was buried at Oconee Memorial Park and Mausoleum, Seneca, Oconee County, South Carolina.1