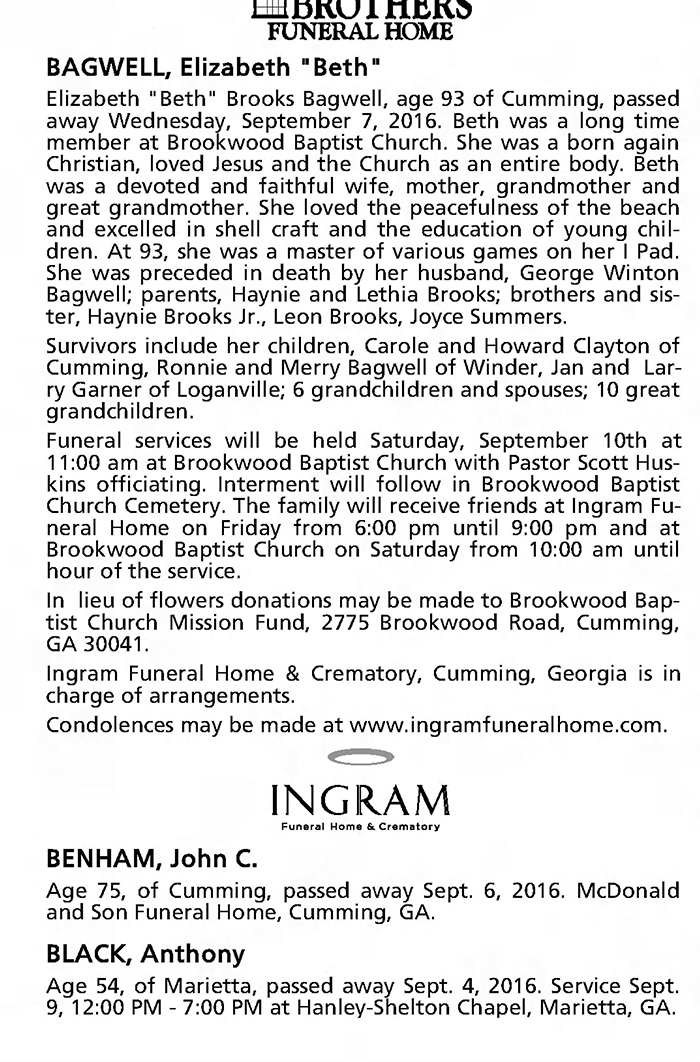 She was a member of Brookwood Baptist Church. Thelma was born and raised in the heart of the Coal Mountain community by her mother Viola Mundy. Thelma was a co-owner of Bagwell and Mathis Tire Company. She was well known for her homemade cakes which she loved to share with others.

Funeral Services will be held on Tuesday, March 22, 2016 at 1:00 PM, in the chapel of Ingram Funeral Home with Rev. Ruel Martin officiating. The interment will follow at Sawnee View Gardens.

Mrs. Bagwell lived in the Atlanta area since 1964. She was a loving wife and mother who supported her husband's ministry as a pastor's wife since l966.

Mrs. Bagwell also was the author of numerous articles distributed by her husband. She was a Sunday School teacher, church solist and an integral part of the churches her husband served. She loved to travel with her husband to the hundreds of revivals he preached.


Funeral services will be held at 11:00 AM Saturday, January 24, 2009 in the Chapel of McDonald and Son Funeral Home with Reverend Dr Mike Bagwell and Reverend Joel Bagwell officiating.

Condolences may be expressed online at www.mcdonaldandson.com 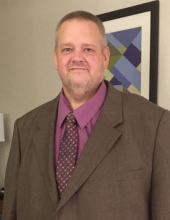 Obit;
Rev. Joel Andrew Bagwell 48 of Doraville, GA went home to be with the One he loved and preached about, his Lord and Saviour, Jesus Christ on 4-15-2020.
Joel was born 1-9-1972 at Dekalb General Hospital in Decatur, GA to Mike and Norma Bagwell. He graduated from Riverdale High School where his dad was asked to preach the Baccalaureate Sermon that year. He also graduated from the West Lenoir School of Theology in Lenoir, NC . After serving for a short period of time as Assistant Pastor to his Dad, Joel accepted the Pastorate of Grace Baptist Church in Doraville where he faithfully served until his death.
Joel was preceded in death by his mother, Norma Wilson Bagwell, his maternal gra nd parents, James & Delores Wilson of Coudersport, PA and his paternal grandparents, Daniel & Sarah Bagwell of Columbus, SC.
Leaving to cherish his memories are his sons, Andrew Bagwell and Aaron (Layla) Bagwell; father, Dr. Mike (Debbie) Bagwell; sister, Joy (Travis) Smith; brother, John (Amanda) Bagwell; grandson, Adrian and grandbabies due on May 1. Also survived by nephews, Michaiah Smith, Jeremiah Smith and Asher Bagwell; aunts, Bonnie Bagwell and Lesa Blackmon of SC; uncle, Steve Bagwell of SC; and numerous cousins.
Due to current restrictions a private service will be held at Crowell Brother Funeral Home in Peachtree Corners on Saturday with Joel's father, Dr. Mike Bagwell conducting the service.
In lieu of flowers of flowers an account has been set up by Neillie Head Memorial Baptist Church for the funeral expenses.

Child of Louis D. Bagwell and Christine B. Jones

Child of Christine B. Jones and Louis D. Bagwell