F, b. 22 October 1937, d. 13 June 2006
Empress Ann Hicks was born on 22 October 1937 in Rotan, Fisher County, Texas.1 As of 20 December 1955,her married name was Bagwell.1 She married Austin Claudell Bagwell, son of Claud Herbert Bagwell and Nancy Patience Austin, on 20 December 1955.1 Empress Ann Hicks died on 13 June 2006 in San Antonio, Bexar County, Texas, at age 68 [:CR:]Empress Ann Hicks Bagwell passed away on June 13, 2006 after almost a year long fight against cancer. She was born October 22, 1937 to Charlie Delaney Hicks and Mary Jane Adams Hicks in Rotan, Texas and spent her early years there. After a year at Hardin-Simmons University in Abilene, she married Austin Bagwell on December 20, 1955 and they established their home in San Antonio in 1956. They raised 4 children and as the youngest child entered middle school, Empress returned to college to pursue her degree in education. She graduated from UTSA in 1982 and then taught 3rd grade at Gilbert Elementary in San Antonio from 1982-2002. During the mid-1970s she served as the children's coordinator at First Baptist Church where she was a member for many years. Since 1987, she joyfully served the Lord as a member at Alamo City Christian Fellowship. Over the years, she was a dedicated teacher in church and in school keeping in touch with many former students both from the public school and from Sunday School classes she taught.

The family moved to Tyler, TX shortly after he was born. He graduated from Tyler High School and attended Tyler Junior College and the University of Texas.

He joined the USAF in 1950 as an airman. The Air Force sent him to complete his BS, MS and PhD in Electrical Engineering all at University of Texas. He loved the Longhorns!

Jim was a "unique breed" of officer. He was involved in early top secret satellite intelligence gathering. His final assignment in the Air Force was as Commander of Aerospace Data Facility at Buckley AFB, Aurora, CO at the rank of Colonel.

He continued working in the aerospace industry as a consultant for Department of Defense until he retired in 1992.

Jim had five children from his previous marriage. He married Joyce Glezen in 1978 and they were happily married for 33 years. In his retirement he and Joyce raised Boer goats in Manchaca, Black Angus cattle in Goliad, and his favorite Black belly ducks on the Boerne spread.

Jim began playing golf in his 30s. He was a scratch golfer for many years and shot under his age while in his 70s. He played in the Glen Campbell Open while stationed in Southern California with many of the great golfers of the 1970s. He and Joyce enjoyed golf course membership at Onion Creek, TX and in Alto Lakes, NM.

He is preceded in death by his parents, his brother Ray Bagwell and his daughter, Nancy Frazar. 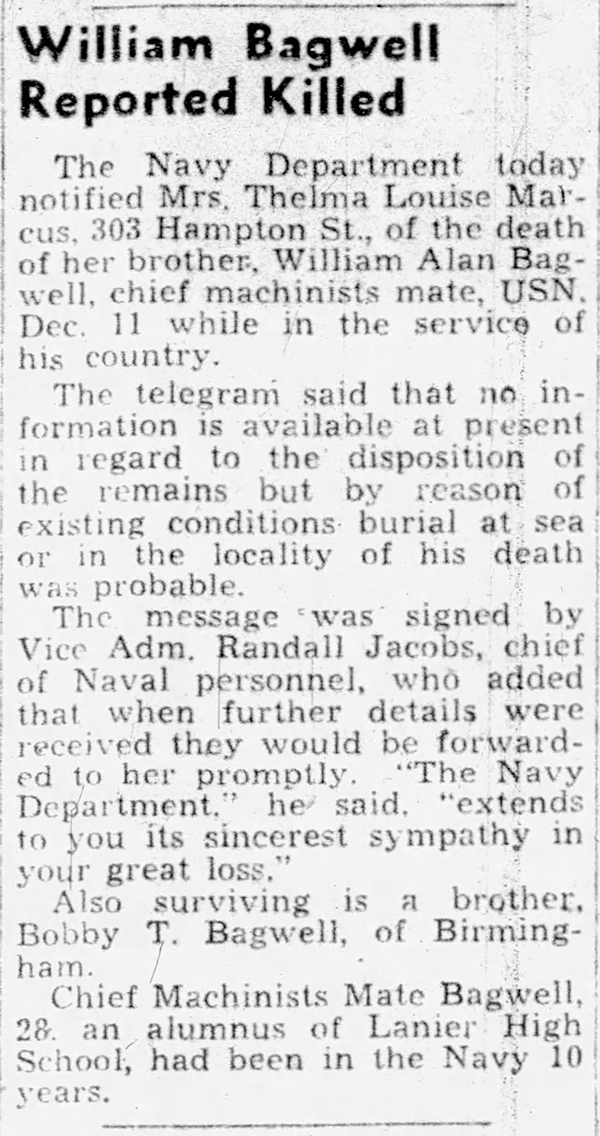 William Alan Bagwell - Obituary
Alabama Journal - December 21, 1944 - Page 03
William Alan Bagwell was born on 22 November 1915.1 He was the son of (?) Jones and Dicie O. Bagwell. William Alan Bagwell lived on 23 January 1920 in Florala, Covington County, Alabama.2 He married Nancy Christine Bennich circa 1933. In 1940, he was living in Norfork, Virginia as a Machinist's Mate on the Naval Operating Base aboard the USS Boyet. William Alan Bagwell lived in 1940 in Norfolk, Norfolk City, Virginia; He was serving onboard the USS Boggs, which was was a Wickes-class destroyer in the United States Navy. He served as a CMM - Chief Machinist Mate in the US Navy during World War II and and was killed in action.1 He died on 11 December 1944 in Leyte Campaign, Phillippines, at age 29.1 He was buried at Fort Sam Houston National Cemetery, San Antonio, Bexar County, Texas.1

M, b. 1880
Oscar Clyde Hughes was born in 1880. He married Lena Moselle Bagwell, daughter of Wiley Biggers Bagwell and Mattie James, after 1903.

F, b. 4 January 1884, d. 21 February 1958
Bertha Bernice "Bertie" Johnson was also known as Bertie J. Bagwell. She was born on 4 January 1884 in Alabama.1 As of before 1921,her married name was Bagwell.1 She married Chester Augustus Bagwell, son of George Washington Bagwell and Matilda Ann Hubbard, before 1921.1 Bertha Bernice "Bertie" Johnson died on 21 February 1958 in Fulton County, Georgia, at age 74.1 She was buried at Westview Cemetery, Atlanta, Fulton County, Georgia.1

Mr. William “Charlie” Bagwell of Fayetteville passed away on March 18, 2018.

Charlie was the owner of Charlie’s Trading Post in Atlanta for the past 57 years and an accomplished race car driver having raced in parts of seven decades. He was inducted into the Georgia Racing Hall of Fame in 2006. Not only was Charlie an accomplished race car driver, he also signed a pro baseball contract with the Atlanta Crackers at the age of 17 and a professional bowling contract.

Funeral services will be held Thursday, March 22, 2018 at 1 o’clock at the Chapel of Parrott Funeral Home with Dr. Lavon Womack officiating. Interment to follow at Westview Cemetery.

Those wishing may sign the online guest registry at www.parrottfuneralhome.com.