NOTE: This man is almost certainly the soldier who enlisted in Company E, 13th Battalion, the Partisan Rangers, at Monroe on 13 August 1862 as a private. His record states that he was killed on 1 November 1862. The court record below states that he died on November 11th.

To the Honorable the Judge of the 11th Judicial District Court in and for the Parish of Union, State
of Louisiana.
The Petition of Elizabeth Hillburn, late wife and now the surviving widow of James C. Bagwell of the Parish and State aforesaid, respectfully shows that the said James C. Bagwell departed in this life on the 11th November 1862, leaving a small estate and dying intestate. He also left two minor children to wit: Delaware and Benjamin Thomas Bagwell, the issue of the marriage of deceased with petitioner. Said estate consists of a small tract of land and some stock and household and kitchen furniture and some debts. Petitioner avers that an administrator is necessary. Wherefore, she prays that this her application be legally advised and after the legal delays and advertisements, she be appointed administrator of the said estate of James C. Bagwell, decd. on giving the bond and taking the oath required by law, and that an inventory and appraisement of the same be made according to law, for all orders and
decrees necessary in the premises and for general relief &c.
Jno. L. Barrett, Atty.

State of Louisiana 11th Judicial District Court Parish of Union
The premises considered, it is ordered and decreed that the within application of Elizabeth
Hillburn to be appointed Administratrix of the Estate of James C. Bagwell, Decd. be advertised according to
law. It is further ordered that the Recorder of the Parish of Union be and he is authorized to make an
inventory and appraisement of the property belonging to the said estate of James C. Bagwell, Decd. and due
return thereof make to this office without delay.
Done and signed in office on this the 13th day of
November AD 1862.
W. C. Smith,
Deputy Clerk


State of Louisiana 11th District Court
Parish of Union
I, Elizabeth Bagwell, do solemnly swear that I will faithfully and impartially discharge all and
singular the duties incumbent on me as Administratrix of the Estate of J. C. Bagwell, Decd. to the best of
my ability and understanding. So help me God.
Elizabeth E. (her X mark)
Bagwell
Sworn to and subscribed before me this 3rd day of December 1862.
W. S. Davis, J. P.

Whereas Elizabeth E. Bagwell has this day been duly and legally appointed Administratrix of the
Estate of J. C. Bagwell, Decd. and she has given bond with good security. Now, therefore, the said
Elizabeth E. Bagwell is hereby duly and legally authorized and empowered to do and perform all acts
appertaining to said appointment according to law.
Given under my hand and the seal of said court this 29th December 1862.
J. L. Guthrie, Clerk


State of Louisiana 11th District Court
Parish of Union
Know all men by these presents that we, Elizabeth E. Bagwell as principal and J. R. Pardue and James B.
Bearden as her securities, are held and firmly bound unto W. B. Egan Judge of the aforesaid court for said
Parish and State in the just and full sum of Eleven hundred ten dollars and fifty cents to the true and
faithful payment thereof well and truly to be made.
We bind ourselves, our heirs, assigns and legal representatives firmly by these presents. Date
Farmerville, December the 5th 1862.
The condition of the above obligation is such that whereas the above bounden Elizabeth E. Bagwell
has been duly and legally appointed administratirx of the estate of J. C. Bagwell, Decd. and she hath taken
the oath required by law.
Now therefore if the said Elizabeth E. Bagwell shall faithfully and impartially discharge all and
singular the duties incumbent on her as administratrix of said estate and shall faithfully account to the
Judge of said court for all monies or property (received from this or any other state) belonging to
said Estate and shall render a true and faithful accounting of all her acts and doings in and about
said estate to the Judge of said court and whenever legally required so to do to pay over all sums of
money and deliver all the property of whatever nature to the proper person or persons to receive the same.
Then this obligation to be null and void, otherwise to be in full force and effect.
Done, signed and acknowledged before me the day and date above written.
W. S. Davis, J. P. Elizabeth E (her X mark) Bagwell
J. L. Guthrie, Clerk J. R. Pardue
J. B. Bearden


State of Louisiana
Parish of Union
Do you and each of you solemnly swear that you will faithfully and impartially appraise all the
property that may be presented to you belonging to the Estate of James C. Bagwell, Decd. to its cash value
to the best of your judgment and understanding. So help you God.
John Feazel
Michael Feazel
Sworn to and subscribed before me on this the
4th day of December AD 1862.
W. C. Smith, Recorder


State of Louisiana
Parish of Union
Be it remembered that on this the 4th day of December 1862 in pursuance of an order of the
Honorable 11th Judicial district court in and for the Parish of Union, State aforesaid and to me William C.
Smith, Parish Recorder and Ex Officio Notary Public in and for the Parish and State aforesaid, I repaired to
the late residence of James C. Bagwell, Decd. late of the Parish of Union and being assisted by John Feazel
and Michael Feazel, two good and lawful citizens of said Parish who were duly appointed and sworn by me
the said Recorder, as appraisers and in the presence of two competent witnesses, proceeded to make an
Inventory and Appraisement of the Estate of the said James C. Bagwell, Decd. as hereafter with forth viz.


Having completed the foregoing inventory, I have on this the 4th day of December 1862 closed the same in
testimony whereof, I have caused said appraisers to sign their names hereto in presence of M. S. Bagwell
and Furney Bagwell, two good and lawful witness who have also signed with said appraisers and me the said
Recorder on this the day and date above written.
Furney (his X mark) Bagwell John Feazel
M. S. Bagwell Michael Feazel
W. C. Smith, Recorder


To the Honorable the Judge or the Clerk of the 11th
Judicial District Court in and for the Parish of Union,
State of Louisiana.
The Petition of Elizabeth H. Bagwell,
Administratrix of the Estate of J. C. Bagwell, Decd. respectfully shows that said estate has been appraised
at between five and six hundred dollars, that the said estate is considerably in debt and that it will be
necessary to sell all the property both personal and real of said estate to pay the debts of the same.
Wherefore she prays for an order from your honorable court authorizing the sheriff of said Parish of Union
after the legal advertisement to sell at the Court House door all the property both real and personal of
the said estate for the purpose of paying the debts of the same according to Arts. 990, 991 and 992 of
the Code of Practice and for general relief &c.
Jno. L. Barrett, Atty.


State of Louisiana 11th District Court
Parish of Union
The premises considered, it is ordered that there be a sale of all the property belonging to the Estate
of J. C. Bagwell, Decd. It is further ordered that the sheriff be authorized to make said sale at the
Court House door.
Done and signed in office this 29th December 1862.
J. L. Guthrie, Clerk


To the Honorable the Judge or the Clerk of the 11th
Judicial District Court in and for the Parish of Union.
The petition of Elizabeth Bagwell of the Parish and State above written respectfully represents that
she has administered the estate of J. C. Bagwell so far as it has come into her possession and finds that
the assets of the Estate amount to the sum of seven hundred and twenty seven and 75/100 Dollars Cash.
She further represents that the estate owes as follows:
Law charges
Acct. of J. L. Guthrie, Clerk $15.25
Acct. of Sheriff 9.80
Acct. of W. C. Smith, Recorder 9.00
Acct. of Jno. L. Barrett, Atty. ___25.00
59.05
The privilege claim of the widow and minor
heirs of Deceased, Delaware and
Benjamin Thos. Bagwell for 1000.00
Judicial Mortgages
In favor of Carson & Bayless besides
Interest and cost 69.00
In favor of Terry and Madden besides
cost and int. 97.52
In favor of W. H. and M. S. Carson
Besides int. and cost 135.56
In favor of J. Tignor say about __20.00
Total of privilege mortgage $1381.13

Besides perhaps some ordinary debts in the amount of
which if any she does not know.
Wherefore she prays that this her statement of debts be advertised according to law and for an order
after the legal delay for her the Administratrix to pay the debts in the order in which they stand in this her
statement to wit:
1st Law charges
2nd The widows privileges
3rd Judicial Mortgage
4th Ordinary debts and for all orders necessary and
for general relief &c.
Jno. L. Barrett, Atty.


State of Louisiana
Parish of Union
The premises considered it is hereby ordered, adjudged and decreed the foregoing statement of debts
and tableau of distribution be advertised according to law.
Done and signed in office on this August 1st AD 1863.
Thos. C. Lewis, Clerk.

F, b. 29 October 1881, d. 4 April 1964
Mary Ellen Streetman was born on 29 October 1881 in Christian County, Kentucky. As of before 1911,her married name was Bagwell. She married Theodore Issac Bagwell, son of Richard Allen Bagwell and Allie Onie Cassandra Smith, before 1911. Mary Ellen Streetman died on 4 April 1964 in Montgomery County, Tennessee, at age 82. She was buried at Sango Cemetery, Sango, Montgomery County, Tennessee. 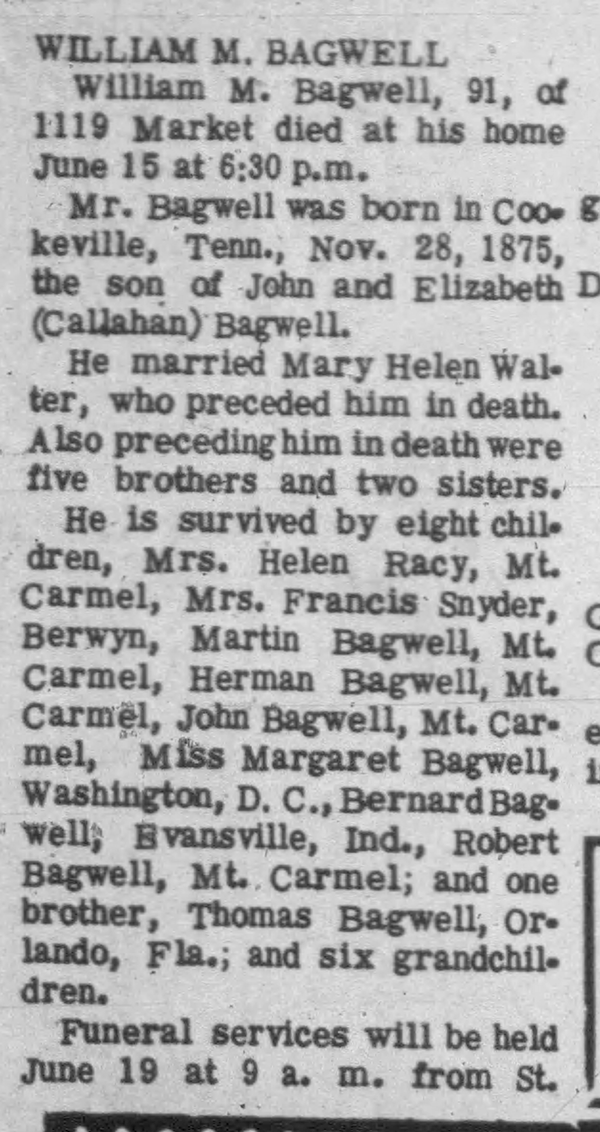 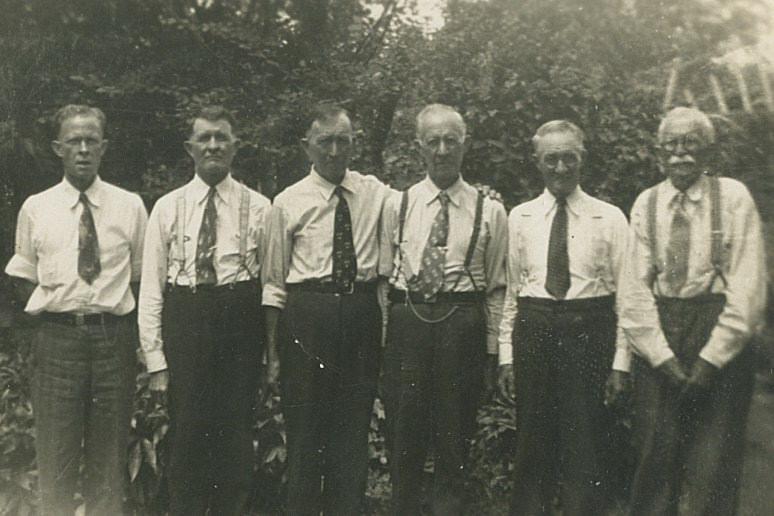 Children of William Bagwell and Mary A. Johnson

Children of Mary A. Johnson and William Bagwell

M, b. 26 August 1846, d. 13 November 1936
Samuel Woodson Bagwell was born on 26 August 1846 in Franklin, Howard County, Missouri.1,3 He was the son of William Bagwell and Mary A. Johnson.1,3 Samuel Woodson served in 7th Regiment, Missouri State Militia Cavalry, Company E. for the United States Army (Union) during the Civil War.

F, b. circa 1868
Annie M Bagwell was also known as Sarah A. Bagwell. She was born circa 1868 in Missouri.1 She was the daughter of Samuel Woodson Bagwell and Lucy Frances Silvers.1