M, b. 26 January 1972, d. 24 July 1975
Dale Allen Bagwell was born on 26 January 1972. He was the son of Larry Jo Bagwell and Wilma Jo Bryant. Dale Allen Bagwell died on 24 July 1975 in Howard County, Indiana, at age 3 of drowning (Asphyxiation) by falling in a resevoir. He was buried at Kokomo Memorial Park Cemetery, Kokomo, Howard County, Indiana.

M, b. 23 January 1916, d. 20 March 1929
Oleith Bagwell was also known as Keith Bagwell. He was born on 23 January 1916 in Waltz, Wabash County, Indiana. He was the son of Garry Falson Bagwell and Lillian Mae Landrigan. His parents were not married at the time of his birth. In addition, Oleith or Kevin Bagwell's father is listed as Gary Bagwell on the birth certificate and Scott Bagwell on the death certificate.

M, b. 9 December 1974, d. 22 October 2005
David Ray Bagwell was born on 9 December 1974 in Denver, Colorado. He was the son of Davie Maxwell Bagwell and Debra Jean Littrell. David Ray Bagwell died on 22 October 2005 in Ossian, Wells County, Indiana, at age 30 of asphyxiation from carbon monoxide poisoning from a generator running in the basement of his house. He was cremated at Fort Wayne, Indiana.

Children of Theodore Roosevelt Bagwell and Dorothy A. Bierd

Child of Dorothy A. Bierd and Richard R. Cresse

Children of Dorothy A. Bierd and Theodore Roosevelt Bagwell 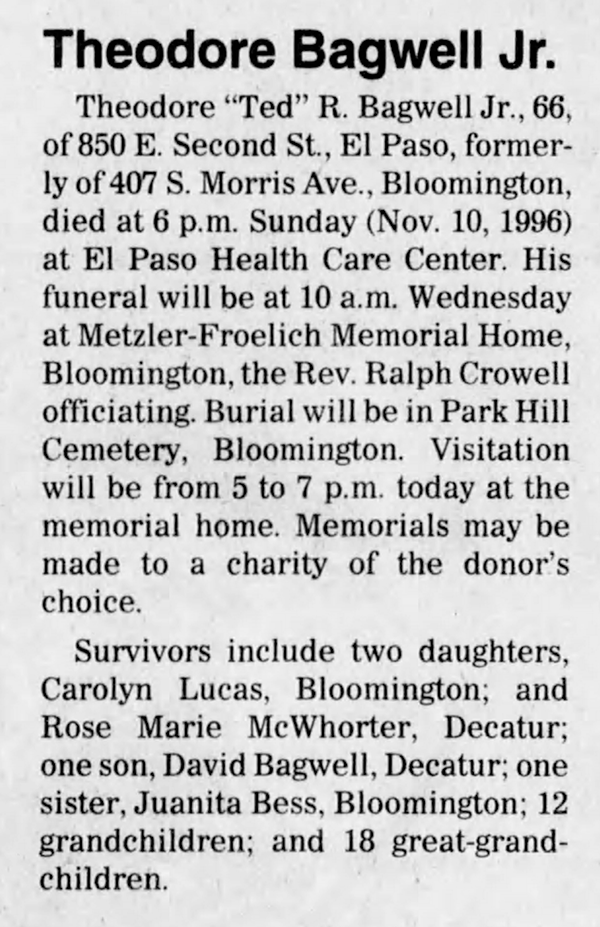