Camdyn Erin Bagwell is the daughter of Travis Aaron Bagwell and Tanya Zanco.1

Tanner Jacob Bagwell is the son of Travis Aaron Bagwell and Tanya Zanco.1

Kimberly Bagwell is the daughter of Tommy Clyde Bagwell and Raytheda Faye Clayton.1

Jennifer Ann Bagwell is the daughter of William Ernest Bagwell and Sandra R.

Susan C. Bagwell is the daughter of William Ernest Bagwell and Sandra R.

Child of Patricia A. Roberts and Tom Walton Bagwell

She was born Grace Mildred Graham on Oct. 17, 1927, in Hillsborough, N.C., to William and Linda Graham. After both her parents met an untimely death, Augusta was adopted at age 2 by Thomas and Emma Bagwell of Hamlet.

Augusta was a student of the Hamlet School System for 10 years, but in her senior year graduated from Campbell Junior College. She then went on to attend Wake Forest College for two years. She was a member of First Baptist Church of Hamlet, serving as music director for the 4- and 5-year old Sunday school class, was on the Ordinance Committee, Kitchen Committee and was also involved in the Ministry for the Deaf.

Augusta retired from the Baptist Children's Home as a child care worker. She formerly was CNA at Palmer Hinson Care Center, a member of the Order of the Eastern Star and was a tax preparer for H&R Block. She also held several positions in the medical field while living in New Jersey.

Visitation will be from 6 to 8 p.m. Thursday at Harrington Funeral Home.

The funeral will be at 11 a.m. Friday at First Baptist Church, Hamlet with the Rev. Randy Bishop officiating. Burial will follow at Mary Love Cemetery, Hamlet.

In lieu of flowers memorials may be made to First Baptist Church, 208 Charlotte St., Hamlet, NC 28345.

Harrington Funeral Home and Crematory is serving the Garrison family.
Online condolences may be made at www.harringtonfuneralhome.com.

Published in The Richmond County Daily Journal on Tuesday, Sept. 23, 2014.

Mr. Garrison was a member of First Baptist Church of Hamlet, where he was on the Ordinance Committee and signed for the deaf , retired Child Care Worker at Baptist Children's Home, Thomasville, NC and Aberdeen Fabrics in Aberdeen, NC. He was a WWII Veteran serving in US Army. He served in the C.C.C. in Camp Prescott, Oregon in 1939-1940, before serving the 5TH Army in WWII in Oran, Africa, Sicily and Italy in the 45th Division under General Patton and Gen, Mark W. Clark. During this time he was awarded the Silver Star and other medals. He was awarded the Purple Heart, November 2005, 62 years after his injury. He was a member of American Legion, Post 49, Hamlet, and AMVETS Post 316 of Rockingham, Military Order of Purple Heart, Chapter 647of Hamlet and VFW. He was a member of the National CCC, as he had been a new and used car dealer in Hamlet.

HARRINGTON FUNERAL HOME and Crematory is serving the Garrison Family.

Melvin S. Haley, age 95, passed away on Tuesday.
Melvin was born in Leakesville, North Carolina to the late Percy T. and Minnie Hailey. He was a graduate of Emmanuel College in Franklin Springs, Georgia and was an ordained minister. He pastored several churches in the Georgia and South Carolina Pentecostal Holiness Conferences. Melvin had a deep love of the Bible and wrote several articles that are now archived in Georgia and Oklahoma. He served as a Chaplain with the Civil Air Patrol for over 20 years and retired as the rank of Colonel.
He is preceded in death by his wife of 48 years, Francis Haley; step-daughter, Margaret Harry; step-son-in-law, Roger Soper; three sisters; and two brothers.
The family will receive friends from 5-7:00 P.M. Thursday at Crest Lawn.
Funeral services will be 11:00 A.M. Friday in the Chapel of Crest Lawn Funeral Home with Reverend Gary Velie, Reverend Robert Webb, and Reverend Richard Soper officiating. Interment will follow in Glen Haven Memorial Gardens.
Please sign the online registry at, www.crestlawnfuneral.com.
Crest Lawn Funeral Home has charge of funeral arrangements.

F, b. September 1882
Margaret Bagwell was born in September 1882 in Virginia. She was the daughter of Isaiah Bagwell and Sarah Duffy. 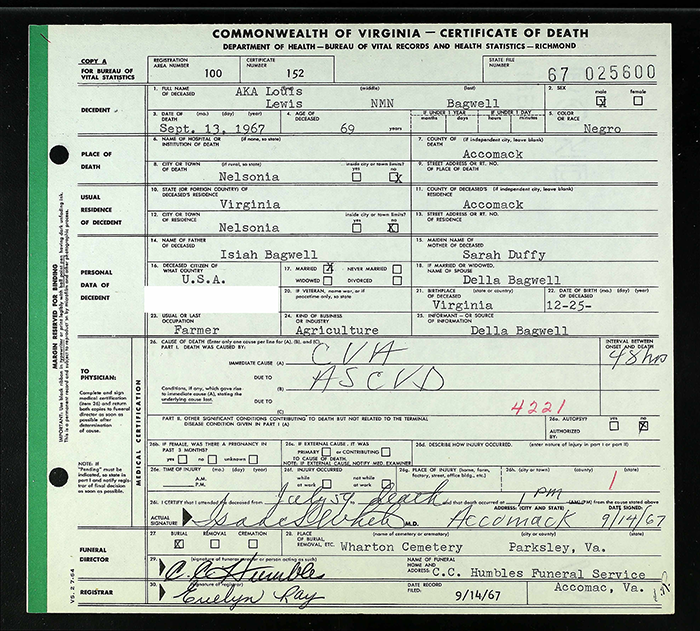 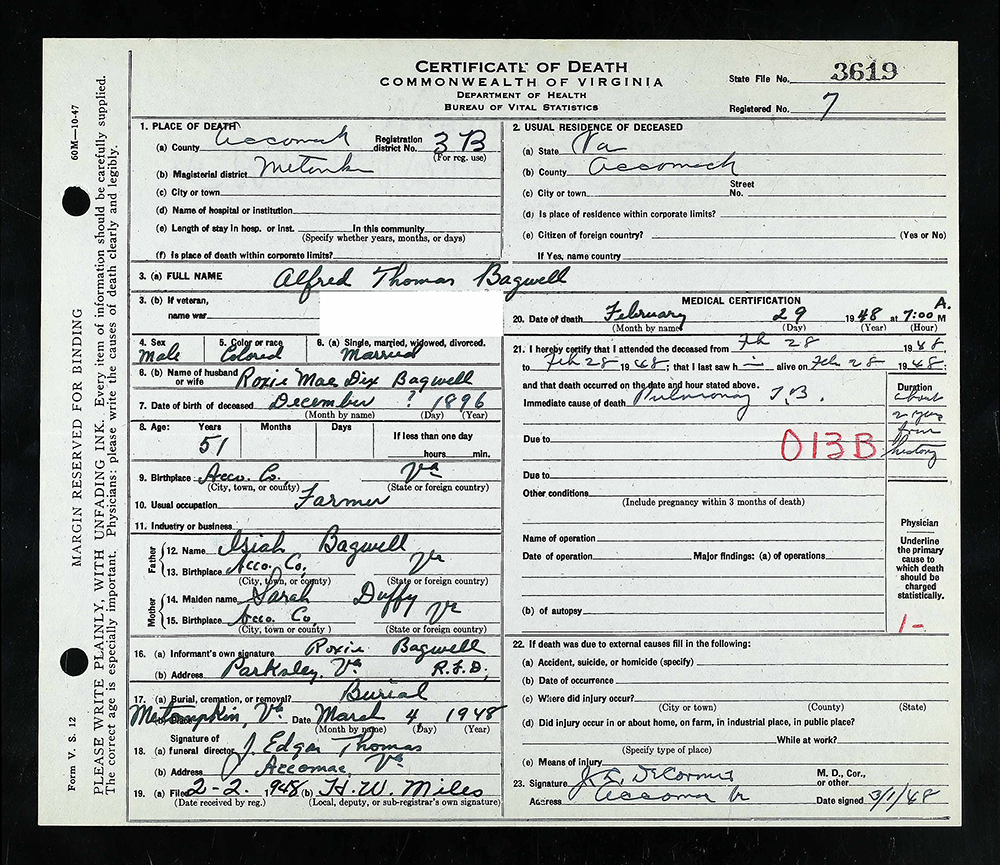 Linda Mina Bagwell was born on 19 September 1948 in Washington, District of Columbia. She was the daughter of Alfred Aloysius Bagwell and Hermina Anduazya. As of 3 April 1968,her married name was Johnson. Linda Mina Bagwell married Gary Allen Johnson on 3 April 1968 at Arlington, Virginia.