Jean Marie (Williams) Bagwell was born March 15, 1947 in Valentine, NE. to Julia (Borszich) and Lloyd Williams. She received her early education in Crookston Elementary School and then attended high school in Valentine. She graduated with the class of 1965.

Jean married Ronald Bagwell in Lincoln, NE on October 25, 1969. This union was blessed with two children; Bob and Pam. Ron and Jean raised their family in Valentine and then moved to Grand Island, NE in 1990.

She was a member of First Faith Methodist Church in Grand Island. Jean enjoyed sewing, cooking, painting and crocheting. Her fried chicken couldn’t be beat and was a family favorite.

Graveside service was held on Saturday, June 6th at 11:00 AM at the Crookston Cemetery in Crookston. Sandoz Chapel of the Pines is in charge of service arrangements.


She was buried at Crookston Cemetery, Cherry County, Nebraska.

Ronald Bagwell is the son of Ronald L. Bagwell and Jean Marie Williams.

Carson Bagwell is the son of Ronald Bagwell.


Stacy Elizabeth Bagwell LEESVILLE - Stacy Elizabeth Bagwell, 12, of Leesville, passed away Tuesday, June 2, 2020. Funeral services will be held at 3:00 P.M. Saturday, June 6, at Convent Baptist Church with internment to follow in the church cemetery. The family will receive friends after the service. Stacy was born at Lexington Medical Center, daughter of James Ellis Bagwell III and Holly Ashley Walker Bagwell. She was a member of Convent Baptist Church, where she was an active member of the youth program. She loved to play soccer, sing, dance, and do arts and crafts. Surviving are her father, James "Jamie" Bagwell III; mother, Holly Walker Bagwell; brother, Aiden Bagwell; and many extended family and friends. Memories and condolences may be expressed at miltonshealy.com.
Published in The State on Jun. 5, 2020. 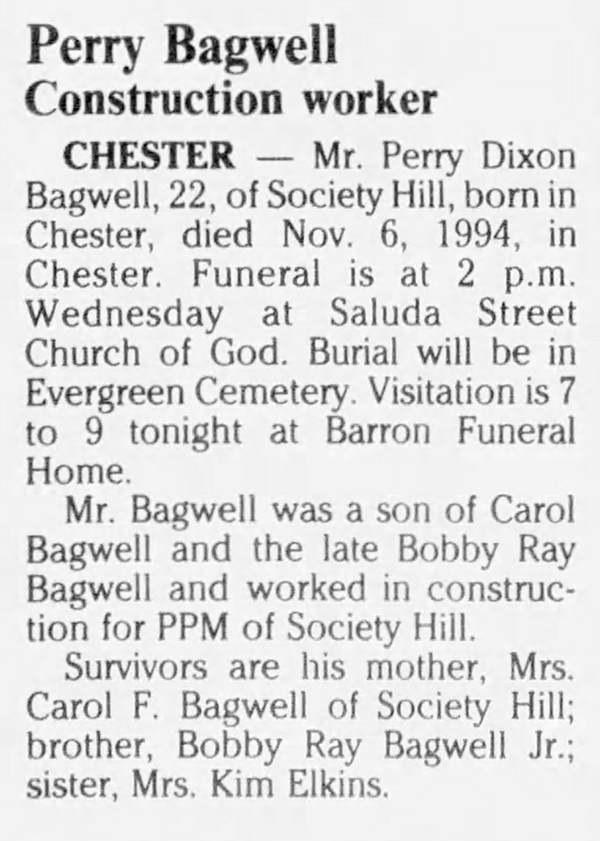 F, b. circa 1963
Sherri Lynn Durrett was born circa 1963 in Hartford, Connecticut. As of 15 September 1996,her married name was Bagwell. She married Ronald Wayne Bagwell, son of Benny Bazal Bagwell and Betty June Agnew, on 15 September 1996 at Smith County, Texas.


Marciea Bagwell, age 51, of Nevada, TX, passed away on February 18, 2020. She was born March 29, 1968, in Sioux City, IA, to Marvin Dean Berg and Sylvia Marie (Beltz) Berg. Marciea was a cofounder of My Fostering Hope, an organization that collected toys and clothes for children. She was also very active with the Special Olympics with her daughter. She will be deeply missed by everyone who loved her.

A celebration of Marciea’s life will be held at 1:00 pm on Friday, March 6, 2020, at Reflections at Rest Haven Funeral Home-Rockwall Location, officiated by Pastor Don Kearby.