He was born August 16, 1931 in Buncombe County, NC to the late William Clay & Leona Bagwell; and came to Frostproof in 1954 from Fletcher, NC. He was a retired owner of Bagwell Lumber, of the Baptist faith and a veteran of the Korean Conflict, serving in the U.S. Navy. He loved hunting, fishing and working with his cows. 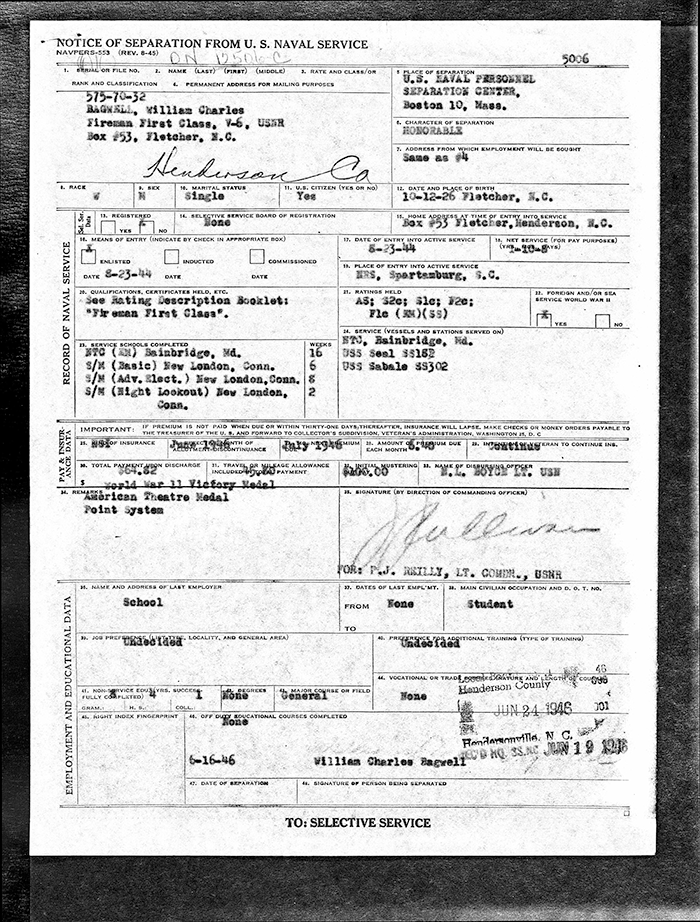 Charles was born in Henderson County on Oct. 12, 1926, the son of William Clay and Leona Singleton Bagwell. He attended Wofford and Western Carolina University. He then served in WW II as a Navy Seal on a Submarine. He did Crop Dusting thereafter and later he ran the Bagwell Lumber Company as President until he retired. He was preceded in death by his wife Sarah Bagwell Oct.25, 2006, a daughter Sandy Bagwell and a grand daughter Amie Bagwell Barnes.

A Celebration of Life Service will be held at 2 pm on Saturday April 30, 2011 at Oak Forest Baptist Church.

M, b. 1939, d. 2 January 2019
Raymond D. Bagwell was born in 1939 in Georgia. He was the son of Forrest Buren Bagwell and Nellie Mae Hayes. Raymond D. Bagwell married Margaret (?) after 1955. Raymond D. Bagwell died on 2 January 2019 in Covington, Newton County, Georgia,
Raymond D. Bagwell, age 80, of Covington, passed away Wednesday, January 2, 2019. Mr. Bagwell excelled at woodworking and was a cabinet maker for over 25 years. As a young man, he enjoyed being outdoors where he worked on a dairy farm, rode horses and oftentimes went camping. A genuine family man, Mr. Bagwell counted time spent with loved ones as one of life’s greatest joys. His favorite pastimes were NASCAR racing, trips to the mountains, and relaxing in his rocking chair. Mr. Bagwell was preceded in death by his parents, Forest B. and Nellie M. (Hayes) Bagwell; and six siblings. 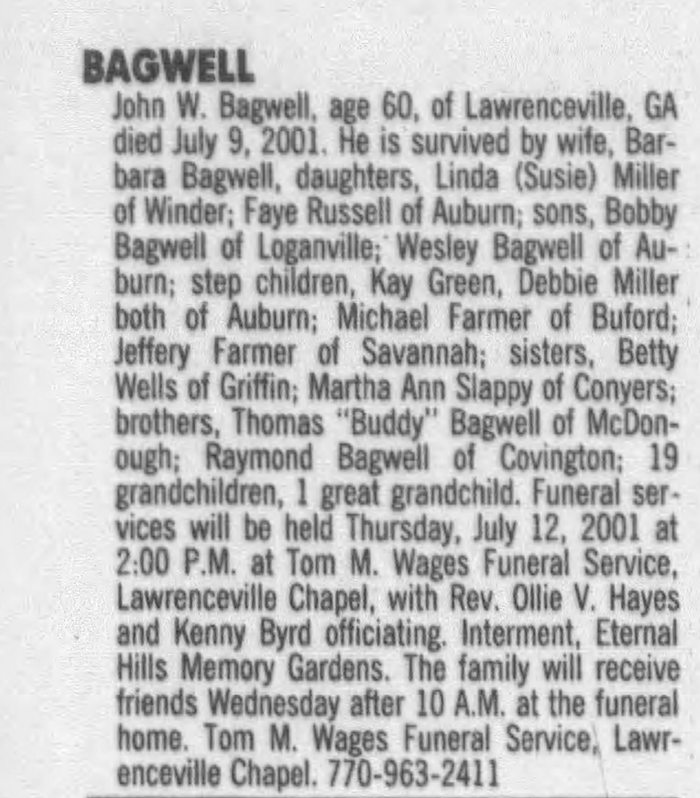 F, b. 20 November 1928, d. 8 October 2007
Betty Joann Crocker was born on 20 November 1928.1 As of after 1945,her married name was Bagwell. She married Herman William Bagwell, son of William Steadman Bagwell and Clara Brown, after 1945. Betty Joann Crocker died on 8 October 2007 in Chesnee, Spartanburg County, South Carolina, at age 78.1 She was buried at Springhill Memorial Gardens, Chesnee, Spartanburg County, South Carolina.1

A native of Cherokee County, he was the widower of Nellie (Bagwell) Cash and a son of the late M. C. Cash and Mary (Richards) Cash.

He was a veteran of the U.S. Army, a member of the Chesnee Masonic Lodge #294, and was of the Baptist faith.

In addition to his wife, he was predeceased by a daughter Annette Cash Tipton; and a grandson, Brian Tipton.

F, b. 23 May 1923
Aline S. (?) was born on 23 May 1923. As of after 1940,her married name was Bagwell. She married Harold Calvin Bagwell, son of Dock Cleveland Bagwell and Clara Azile Brannon, after 1940. Aline S. (?) was buried at Bethlehem Baptist Church Cemetery, Moore, Spartanburg County, South Carolina.

Joy was born in Belmont, NC on April 10, 1940, and was the daughter of the late Paul and Lela Garrett Bagwell.

She was preceded in death by her husband, Reverend Robert Weaver, and her daughter, Cheryl O'Berry.

She is survived by her son: Paul (Jennifer) Weaver; grandchildren: Evelyn Weaver, Brittany, Matthew, and Nathan O'Berry, and son-in-law: Sean O'Berry; and numerous nieces and nephews.

He was a native of Candler County, Georgia, son of the late William Walton and Alice Moseley Mercer. In addition to his parents Foy was preceded in death by his first wife, Mary Bagwell Mercer and a son, Rev. Roger Dale Mercer.

Foy was a veteran of the US Army serving in World War II.

In addition to his parents, first wife and son, he was preceded in death by brother, Ernest D. Mercer; and sisters, Lorene Mercer Stamey and Dottie Mercer Benoy.

A funeral service will be held 3:00 pm Friday, June 19, 2015 at the Dallas Church of God with Pastor Danny Shortridge and Pastor Brett Davis officiating.

Interment will follow the service at Hillcrest Gardens, Mt. Holly with Military Honors rendered by the Gaston County Honor Guard.

Condolences messages may be sent to www.mcleanfuneral.com. McLean Funeral Directors of Gastonia is serving the family.
He was buried at Hillcrest Gardens, Mount Holly, Gaston County, North Carolina.