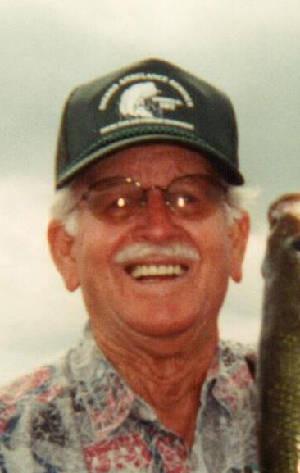 William Calvin Bagwell
William Calvin Bagwell was born on 26 February 1925 in Delight, Pike County, Arkansas. He was the son of William Daniel Bagwell and Dora Blanche Moran. William Calvin Bagwell married Mary Sue Bridgeman after 1946. William Calvin Bagwell died on 28 March 2016 in Arkansas at age 91
William Calvin Bill Bagwell, a Navy veteran, WWII was born in Delight, Arkansas on February 27, 1925 to Dan and Dora Moran Bagwell. Bill passed away on March 28, 2016. Bill retired from Swepco after 37 years, then worked at Walmart in sporting goods. Bill was an avid fisherman. He enjoyed fishing almost daily, then liked to tell about his days on the water. Bill loved people and always wanted to share a fishing tale. He was a member of the First Baptist Church, a member of Josh Nichols Sunday School class, and in his younger days sang in the choir. Bill was also a member of the International Brotherhood of Electrical Workers for over 65 years. He was also a member of Howard County Search and Rescue for many years. Bill is survived by his loving wife, Mary Sue Bridgeman Momon Bagwell; four daughters, Andrea Kay (Jim) Lane of Conway, Liz (Dan) McDaniel of Nashville, Diane (Berry) Shewmaker of Nashville, and Cathy Johnson of Nashville; one son, William “Bill” (Becky) Bagwell of Conway; one step-daughter, Martha (Bruce) Momon Rogers of Fort Pierce, Florida; Betty Hile Alexander, the mother of his children of Nashville; one sister, Mary Regnier; and a brother, Jess Bagwell both of Murfreesboro; 11 grandchildren; 10 great grandchildren; many nieces and nephews and friends. Bill was preceded in death by his parents, Dan and Dora Bagwell, a brother, EJ Bagwell, sister, Zelona Finney, and a stepdaughter, Carolyn Bird Momon Wren. Services will be 1:00 PM Thursday, March 31, 2016 at First Baptist church in Nashville with Brother Kevin Sartin and Brother David Blase officiating. Burial to follow at 3:30 PM in Holly Springs Cemetery in Spring Hill, AR with Brother Kenneth Bobo officiating under the direction of Latimer Funeral Home, Nashville. Visitation will be Thursday, from 11:00 to 12:00 at the church. In lieu of flowers, please send donations to ABC Homes for Children; 10 Remington Dr; Little Rock, AR 72204.
He was buried at Holly Springs Cemetery, Spring Hill, Hempstead County, Arkansas.

He was born in Ben Lomond, Arkansas on December 30, 1920, to William Dan and Dora Blanche Bagwell. He had 5 siblings, Zelona, Jack, Mary, Bill and Clovis. He grew up in Arkansas where he met the love of his life, Flossie Echols. They were married and soon after moved to California to start their life together.

They were blessed with a daughter, Patsy Lou Bagwell, before "Slim" enlisted in the U.S. Army. He served his country as an infantry PFC in the 104th mountain division in Italy where he was wounded before being honorably discharged and awarded the purple heart. He was always proud of the men and women who served this country and was grateful that he was able to be reunited with his family.

Slim and Flossie lived in Gridley before moving to the Yuba/Sutter area. After settling in Yuba City, they had a second daughter, Deborah Bagwell. They enjoyed life in the farming community and lived and worked here for the remainder of their years.

In his younger years, Slim worked in the fields, he was a lumberjack, and later became a forklift driver. He worked in that capacity for Nulaid Farms and Sunsweet for over 30 years. He said he enjoyed his last day on the job as much as his first. He was a man of simple pleasures. He was disciplined, solid, and a great Father through the best and worst of times.

Slim and Flossie enjoyed camping in the Truckee area for many years where they made wonderful friends and many memories. They enjoyed their Moose Camper Club outings and their many trips to the Reno/Tahoe area.

Slim is survived by his daughter, Debbie Grove; and son-in-law, Bill, of Sutter; his sister, Mimi; and brothers, Bill (Mary Sue) and Clovis.

He was preceded in death by his parents; brother, Jack; daughter, Patsy; and wife, Flossie.1

M, b. circa 1871
Wiley Bagwell was born circa 1871 in Texas. He was the son of Wiley Greenberry (Green) Bagwell and Mary Ellen Stowe.

Mr. and Mrs. Otho Land and family were called to Swartz Saturday night at an early hour by the sudden death of their little niece, Gloria Jane, the sixteen months old daughter of Mr. and Mrs. Jack Bagwell, of that place. The little one had been ill for only a short time, and was considered only slightly so by the attending physician in a clinic in Monroe. But on arriving at home from Monroe after treatment there, the little one died entirely unexpectedly.

Burial of the little one, the idol of the entire village of Swartz, took place Sunday afternoon in the cemetery at Downsville, after funeral services in the home of its grandmother, Mrs. J. R. Rush, which was conducted by the Rev. Baughman of that town.

Mr. and Mrs. Bagwell are former students and graduates of Louisiana Tech and have many friends in this city and vicinity who will sorrow with them in the loss of their precious little one.1
She was buried at Downsville Cemetery, Downsville, Union Parish, Louisiana.1

F, b. circa 1904
Rosetta Bagwell was born circa 1904 in Louisiana. She was the daughter of Emanuel Dewitt Bagwell and Dorcas Louise Cheatwood.