She had lived in Lawrence and Sharp County most of her life. She was a homemaker and had worked for Area Agency on Aging.

She was preceded in death by her parents; Harvey and Lorine McQuay Bagwell; son, Shannon Hivley; brothers, Thomas and William Bagwell.

He was a self-employed local land contour surveyor and an avid outdoorsman. Jay enjoyed having pets, being in the woods, and hunting and fishing.

He is preceded in death by his parents; his two brothers, Thomas and William Bagwell; and three sisters, Wanda Caron, Renea Mans and Joy Shanks; and his best dog, Bandit.

Survivors include his daughter, Priscilla (Michael) Cobble of Minturn; two sons, Casey Bagwell of Powhatan, and Nick (Chasity) Bagwell of Imboden; six grandchildren, Ethan Pickett, Remington and Jayde Cobble, Baylor, Owen and Avie Lee Bagwell; two brothers, Louie Wayne (Wilma) Bagwell of Powhatan and Wesley Bagwell of Mt. Home; two sisters, Judy Merrel and Tina Brunson both of Jonesboro; a nephew but like his brother, Garry Bagwell of Ash Flat; and his puppy, Rascal; and many other relatives and friends.


He was buried on 26 August 2021 at Powhatan Cemetery, Powhatan, Lawrence County, Arkansas. 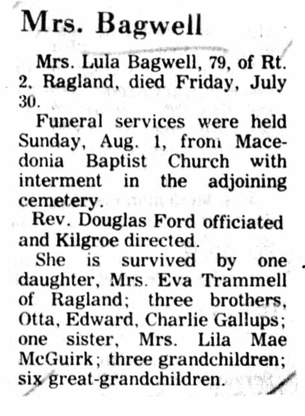 Children of Fornie B. Bagwell and Doris Estelle Jones

He served on the USS Leutze (DD-481) in 1944 and 1945 which was a Fletcher-class destroyer in the United States Navy during World War II.

He served on the USS Kent Island (AG-78/AKS-26) in 1946 which as was a Belle Isle-class miscellaneous auxiliary acquired by the U.S. Navy shortly before the end of World War II. She was used to transport personnel and cargo. Dorse Ralph Bagwell married Wanda Marie Buckingham on 30 December 1951 at Pigott, Arkansas. Dorse Ralph Bagwell died on 30 October 1987 in Memorial Medical Center, Springfield, Illinois, at age 62.1 He was buried at Zeigler Cemetery, Zeigler, Franklin County, Illinois.1

Children of Doris Estelle Jones and Fornie B. Bagwell

F
Leuna Bagwell is the daughter of Fornie B. Bagwell and Doris Estelle Jones.