Karen Bagwell was born on 27 October 1943 in Alamosa, Alamosa County, Colorado.1 She was the daughter of Otho Edgar Bagwell and Bessie Louise Dyer.1 As of after 1960,her married name was Johnson. Karen Bagwell married (?) Johnson after 1960. Karen Bagwell died on 20 February 2015 in Taos, Taos County, New Mexico, at age 71

Karen was born on October 27, 1943 in Alamosa, Colorado. She was raised in Manassa, Colorado. The oldest of two children, she was the daughter of the late Otho Edgar and Louise Dyer Bagwell.

She graduated high school in Manassa and later attended college in Albuquerque, New Mexico. During her lifetime, she worked many jobs. Some of which were, as an operator for the phone company, power plant employee, abstract company administrative assistant, waitress, newspaper delivery services and as a 911 emergency operator. But the job she considered most important was taking time to raise her four children.

She was an active member of the Church of Jesus Christ of Latter-Day Saints. Her faith and love of family were first and foremost. She also loved spending time with family, having fun with friends and listening to classic country music.

Granny, as she was known to her grandchildren, spent much of her time burning up the highway after her retirement. She visited her children and grandchildren often. She was a kind and generous person who loved to laugh. She was a good listener and a great friend. Her love for her family was absolute and unwavering. Grandchildren were loved and spoiled by “Super Granny” constantly. She knew everyone’s favourite snack, birthday, and special events. She would make regular deliveries of goodies to those who lived nearby, and would send shriek-inducing packages to those too far away. She always made everyone feel special.

Karen will forever be remembered by her loving children, daughter Eileen Johnson of Espanola, New Mexico; daughter and son-in-law Sheli and MarkBechaver of Manassa, Colorado; daughter and son-in-law Wendy and Chance Perkins of Bloomfield, New Mexico; son and daughter-in-law Blake and Alicia Johnson of Choctaw, Oklahoma; beloved grandchildren Chelsea, Bryce and Josh Bechaver; Cheyenne, Cheridan, Brody, and BryleePerkins; Kylee, Kristen and Katelynn Johnson; brother Timothy Bagwell of Manassa, Colorado, along with countless other friends and family whom were blessed to know her.

Karen touched the lives of many people with her kindness and generosity. A memorial service was held on Monday, March 2, 2015 at the Church of Jesus Christ of Latter-Day Saints in Manassa, Colorado. 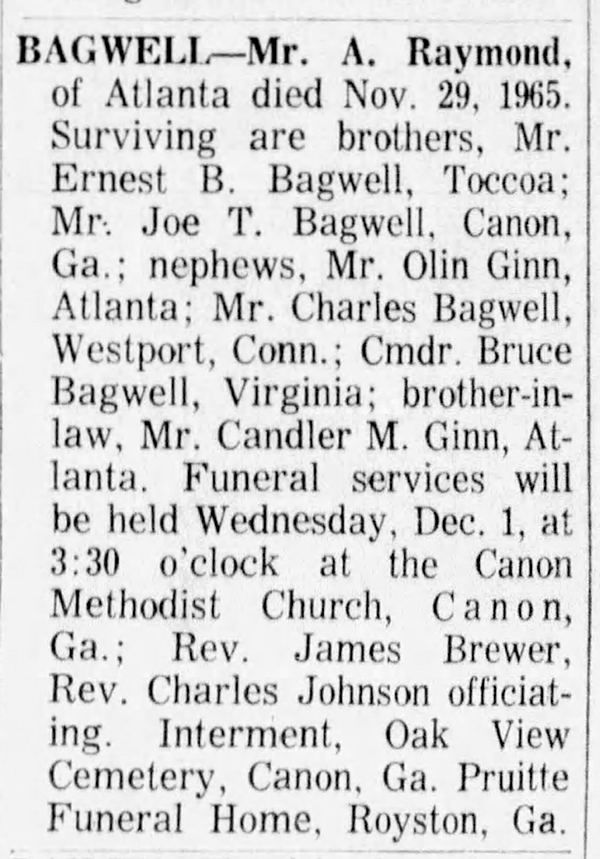 F, b. 22 November 1910, d. 18 May 1992
Louise Bagwell was born on 22 November 1910 in Rochester, Haskell County, Texas. She was the daughter of William King Bagwell and Myrtle Sue Farley. As of 15 September 1930,her married name was Erskine. Louise Bagwell married William Wallace Erskine on 15 September 1930 at Clovis, Curry County, New Mexico. Louise Bagwell died on 18 May 1992 in Sonoma, Sonoma County, California, at age 81. She was buried at Santa Rosa Memorial Park, Santa Rosa, Sonoma County, California.

She was a member of Forest Hills United Methodist Church for 62 years, was an active member of the Rena Green Sunday School class, a long-time member of the United Methodist Women's Association, a member of the Ladies Elk Lodge 72, and the American Legion 88. "G-G" was an avid gardener and loved being among God's beauty and nature. She gained her strength and courage from Hebrews 13:5, "Be content with what you have, because God has said, never will I leave you nor will I forsake you." A Celebration of Life service will be held at Woodlawn's Dignity Hall at two-thirty in the afternoon on Monday, March 26, 2012 with Rev. Jim Hughes officiating. Interment to follow at Woodlawn Memorial Park. Family will be serving as Active Pallbearers. Those serving as Honorary Pallbearers will consist of members of the Rena Green Sunday School Class. The family will receive friends at Woodlawn-Roesch-Patton Funeral Home on Sunday between the hours of two o'clock until four o'clock in the afternoon, then again from six o'clock until eight o'clock that evening, and one hour prior to the service on Monday.

Published in The Tennessean on March 24, 2012.1 She was buried at Woodlawn Memorial Park and Mausoleum, Nashville, Davidson County, Tennessee.1

M, b. 21 February 1911, d. 28 February 1980
Claude Herman Bentley was born on 21 February 1911 in Dennis, Logan County, Kentucky.1 He married Rebecca Elizabeth Bagwell, daughter of Harvey Greely Bagwell and Tennie Rebecca Vaden, before 1935. Claude was in the U.S. Army. He served in Troop B, 109th Cavalry at one time.1 Claude Herman Bentley died on 28 February 1980 in Galveston, Texas, at age 69.1 He was buried at Woodlawn Memorial Park and Mausoleum, Nashville, Davidson County, Tennessee.1

M, b. 6 February 1892, d. 19 March 1924
Claud Edward Bagwell was born on 6 February 1892 in Tennessee.1 He was the son of John Henry Bagwell and Maloney 'Lona' Booher. Claud Edward Bagwell died on 19 March 1924 in Nashville, Davidson County, Tennessee, at age 32.1 He was buried at Spring Hill Cemetery, Nashville, Davidson County, Tennessee.1