M, b. 30 December 1909, d. 14 March 1998
Conrad James "C.J." Sharp was born on 30 December 1909 in Ravia, Johnston County, Oklahoma.1 He married Georgia Corinne Bagwell, daughter of George Bagwell and Alice Lillian Prescott, on 26 June 1938.1 Conrad James "C.J." Sharp died on 14 March 1998 at age 88
SHARP-- Conrad James (C.J.), died Saturday, March 14, 1998 at the age of 88. He married Georgia Corinne Bagwell on June 26, 1938. He is survived by: his wife, Corinne and 4 children, Judith Hanks, husband, Tom, Ann Arbor, MI, James, wife, Carol, Kensington, MD, George, wife, Patricia, Tulsa and David of Tulsa; 11 grandchildren and 1 great-grandchild. He was born in Ravia, OK on December 30, 1909 to Silas and Melinda Jane Sharp. He was the last surviving of their 11 children. Arriving in Tulsa at the age of 19, he began work in the finance business. In 1931 he purchased the Tulsa Credit Co. which evolved into the Sharp Finance Corp., now known as Sharp Mortgage Co. He also owned and operated Sharp Production Co., Sharp Farms, Sharp Loan Co. and was a partner in Blue Stem Co. Mr. Sharp was a member of The Cosmopolitan Club, The Tulsa Farm Club, The Oklahoma Nature Conservancy, Tulsa Chamber of Commerce and The American Angus Assoc. Mr. Sharp was a man of his word and was known for his honesty, integrity and for his faith in another's honest efforts. He was a respected businessman in finance, oil and ranching with business and the love of nature as his hobbies. He will be remembered by not only his family and friends but by his many business acquaintances throughout Oklahoma. Service 1:30 p.m., Thursday, Ninde Garden Chapel. Interment Memorial Park Cemetery. Ninde Funeral Directors, Garden Chapel, 742-5556. (Tulsa World.)1 He was buried at Memorial Park Cemetery, Tulsa, Tulsa County, Oklahoma.1

Audie Bagwell was born on 27 September 1912.1 She was the daughter of Robert Berry Bagwell and Mamie P. Jay.1 Audie Bagwell died on 16 November 1916 at age 4.1 She was buried at Duffau Cemetery, Duffau, Erath County, Texas.1

M, b. 9 October 1872, d. 30 May 1921
William Jackson Rich was born on 9 October 1872 in Calhoun County, Alabama.1 He married Effie Jane Bagwell, daughter of John William Bagwell and Henrietta Victoria Barrow, after 1905.1 William Jackson Rich died on 30 May 1921 in Deaf Smith County, Texas, at age 48. He was murdered on the Hummer Ranch 20 miles North of Hereford, Texas.1 He was buried at West Park Cemetery, Hereford, Deaf Smith County, Texas.1

Robert Bagwell was murdered by Buck Mays on November 10, 1860. There is an old letter from I.E.C. Mayes, who was apparently a cousin to Buck. Mays told how the family cared for him while he was sick:

"Mays has told so many different tales that no one noes what he killed him for. The greatest part of the people believe he killed him because he was witness for me to tell how Mayes treated me when he seen all his conduct toward me. The morning before he died Robert got Father to employ a lawyer. The morning of the first trial, the lawyer charged him seventy five dollars. Father will have it to pay if you don't. The two physicians that attended him will take all of his crop. Brother John worked his crop, and helped Robert, who he waunted to wait on him while he lay sick. He said, John you be sure that Buck Mayes not wait on me for John is my favorite one. He would tell John while he lay sick that he waunted them that waited on him to get well paid, which was Father and John and myself. Father does not charge him anything for his trouble only the lawyer bill which Father took active part with Robert. Brother John carried his weapon by day and night to take care of Robert if Mayes comes back to do as he said. Robert tole Father that he had land and cows and hogs in Louisiana that he had left in your possession and tole him he waunted him to get it. So no more remains until death. Tell your brothers and sisters to right to me and your mother in particular."

This was written on the back side of the letter:

"There is one more thing I waunt to tell you. Mayes tells that you and your Father and one of your brothers is after him. He seen you one night. He dodged behind a tree. He said he could feel his hands on ary one of you, so you noe he is haunted. A guilty cousin needs no accussing. I waunt you to tell me how many letters you have received from me. In your letter you waunted them buttons. I have got all of his clothes and everything he brought to me. I will take care of them until you come. I have the bandages that went around his leg. The doctors says he will right to you as soon as he can.

(Compilers note: I have not changed the spelling of the words (waunt (sic: Want) noe (sic: Know) or made any corrections for fear it would loose its meaning. The documents will speak for themselves. 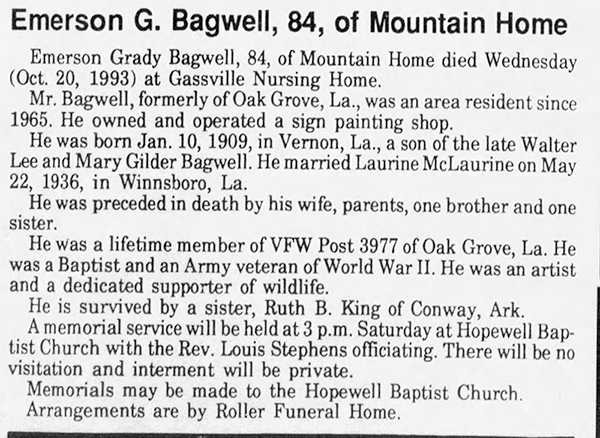