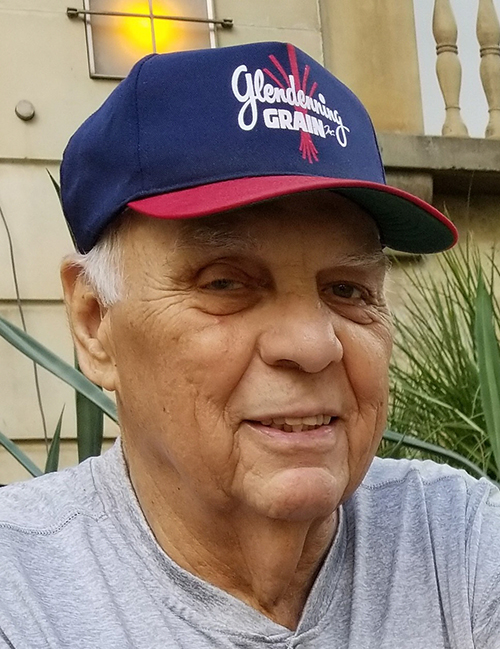 Wallace D. Bagwell, 80, Rockford, died Wednesday, February 14, 2018 in his home. Born January 19, 1938 inSwifton , Arkansas, son of Lewis and Ockrey Horn Bagwell. Married Delores George on May 15, 1969; she died October 25, 2014. He then married Jeanette Shackelford on April 29, 2016. Member of Lincolnwood Baptist Church. Wallace spent a life time driving. He was a long time truck driver, retiring from A&B Freight Lines, and in his younger years he spent some time as a race car driver. He was a proud member of OOIDA. He was a man of faith and was deeply dedicated to his family.
Survivors include his wife, Jeanette; daughters, Lynn (Roy) Gregersen, Winnebago, Laurie (Will) Walt, Silvis, Christina (Jeff) Foster, Anchorage, AK and Lisa Bagwell, Pocahontas, AR; grandchildren, Lacey, Beth, Ben, Bethany, Kyle, Jessica and Josh; several great-grandchildren and his fur grandpups.

Predeceased by his parents, first wife and brothers, Thatcher, Buford, Bob and Jerrel.

The family is very grateful for the outpouring of love, prayers and support in many heart-felt forms from too many people to name individually, but certainly includes Northern Illinois Hospice.

Burial will be at New Milford Cemetery.

Funeral Service will be 1:00 PM Wednesday April 19, 2017 at the T.W. Crow and Son Funeral Home with burial in the Crescent Hill Cemetery.

Memorial donations may be made to the Scottsville Baptist Church.1
He was buried at Crescent Hill Cemetery, Scottsville, Allen County, Kentucky.1

Jerrell Bagwell was born on 11 June 1940. He was the son of Lewis Daniel Bagwell and Ockrey Lenor Horne. Jerrell Bagwell died on 24 January 2017 in Rockford, Illinois, at age 76.

The Bay, Arkansas native was the daughter of the late Leroy Earl Henry and Ruth Dorton Henry. She is preceded in death by her step mother Treva Henry. She was a member of the Scottsville Baptist Church

Funeral service will be at 2:00 PM Sunday November 6, 2011 at the T. W. Crow & Son Funeral Home, with burial in the Crescent Hill Cemetery.

Memorial donations may be made to the Scottsville Baptist Church.1
She was buried at Crescent Hill Cemetery, Scottsville, Allen County, Kentucky.1

Children of Wiley Bagwell and Zelcha (?)

Children of Zelcha (?) and Wiley Bagwell

Lucinda Bagwell was born circa 1876 in Arkansas. She was the daughter of Wiley Bagwell and Zelcha (?)

Carl has been a resident of Jackson, Mississippi since 1954. He was a hard-working, honest mechanic. He worked on cars for many of the doctors and their families when he was employed at King Brown Auto, Parker Truck Service, and Firestone. He retired from Firestone in 1992.

One of his greatest accomplishments was his beautiful and highly productive vegetable garden on the corner of Woody Drive and McDowell Road in South Jackson, which was admired by everyone.

Carl was a GODLY man who was admired for his humility and quiet strength by all who knew him. He was a member of Oak Forest Baptist Church. He was preceded in death by his parents, Dan and Ruby, his brother Charles, and his sister Nell Coleman. He is survived by his wife of 61 years, Pat, daughter, Donna Reynolds (and husband Jeff), son Mark (and wife Vivian), sister Danny Parker (and Leo Parker), and brother Covis. He is also survived by his grandchildren, Shannon Linkous, Kristy Bagwell, Robbie Bagwell, Michael Reynolds (and wife Kayla), and Stephen Reynolds (and wife Laura). His great-grandchildren are Alexa and Hailey Linkous, Ruth and Elijah Reynolds, and Ezekiel Reynolds who is arriving later in December.

Visitation will be 1:00pm until the 2:00pm funeral service, Tuesday, December 5, 2017 at Chancellor Funeral Home in Byram. Interment will follow at Parkway Cemetery.1
He was buried at Parkway Memorial Cemetery, Ridgeland, Madison County, Mississippi.1


Covis Troy Bagwell passed away Thursday, April 30, 2020, at River Place Nursing Home, in Amory, MS. He was 86 years old. Covis was born in Choctaw County, MS, on November 10, 1933, to Dan K. and Ruby(Taylor) Bagwell. He was a retired school teacher where he taught for many years with the Cobb County, GA school system.

Private graveside services will be held at Calvary Baptist Cemetery in Louisville, MS, on Saturday, May 2, 2020, at 1:30 p.m.

Mr. Bagwell is survived by 1 sister, Danny(Leo) Parker of Noxapater, MS, 1 sister-in-law, Pat Bagwell of Jackson, MS, and a host of nieces and nephews.


He was buried at Calvary Cemetery, Louisville, Winston County, Mississippi.

Charles Bagwell was born on 23 September 1937 in Mississippi. He was the son of Dan Kirk Bagwell and Ruby Taylor. Charles Bagwell died on 28 December 1980 at age 43. He was buried at Calvary Cemetery, Louisville, Winston County, Mississippi.

Mark Bagwell is the daughter of Carl Keith Bagwell and Patricia (?)

Donna Bagwell is the daughter of Carl Keith Bagwell and Patricia (?)

Jackie Bagwell is the daughter of Roger S. "Tiny" Bagwell and Shirley L. (?)