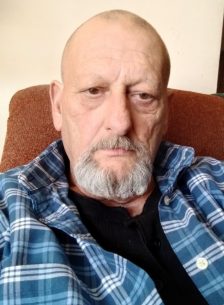 
Steven Douglas Bagwell, 62, of Madison Heights went home to be with the Lord on October 5, 2022 at his residence.

Steve is well known for being the gas attendant at the former Amoco and his love for Jesus. He dedicated his life to raising his daughters and being a caretaker for his father. Steve was a man of few words. He had a love for motorcycles, hot rods, the beach, rock and roll music, but most of all he loved watching the sports channel and Nascar with his dog, Diesel Lou.

Steve was preceded in death by his loving wife, Nora Lynn Bagwell, and his parents, Frank and Shirley Bagwell.

There will be no service per his wishes, but the family will receive friends on Monday, October 10, 2022, from 6 to 8pm at Tharp Funeral Home, Madison Heights.

The family would like to give a special thanks to UVA Cancer Center, and Seven Hills Hospice, especially his special hospice nurse, Alice.

He started his own business in the 60’s, later building R & M Music Co. to be one of the largest amusement companies in Oklahoma. He owned Commercial Real Estate all over NE Oklahoma, cleaning up several undesirable areas in Tulsa to make prime retail and office space. He loved anything to do with business, especially the horse business with his wife Sue of 58 years. He traveled with his family as they showed Palomino and POA’s winning several national titles.

Ray was preceded in death by his parents and his daughter Janice Lynn Admire. He is survived by his wife Sue of the home, two daughters, Susan Bagwell and Lorin Kaiser, grandchildren, Mandy, Taylor, Raymond & Hannah, great-grandchildren Kori and Lynnlee, brother Gary and wife Susan, sister Laverne Powell, nieces, nephews and numerous friends that were part of his family.

Obituary for Eva Sue Bagwell
Eva Sue Bagwell, 81, was born on December 11, 1939, in Haskell, Oklahoma. She passed away on July 23, 2021. She married her husband Raymond Bagwell on January 13, 1961. One of her biggest loves in life was horses. She bred and raised national champion, award-winning, show horses! She started with palominos and moved to POAs after the grandkids were born.

She is survived by her children: Susan Bagwell, and Lorin Kaiser; grandkids Amanda Brumble and wife Crystal; Taylor Kaiser; Raymond Kaiser; Hannah Kaiser-McBride and husband Alex; and great-grandkids Kori Kaiser; Lynnlee Brumble; and Charlie Jo McBride; along with a host of other family and friends that will forever miss and love her.

She is reunited with her husband Raymond Bagwell; her parents and her daughter Janice Lynn Admire.1

F
Susan Bagwell is the daughter of Raymond Lee Bagwell and Eva Sue (?)

Children of Roberta Bagwell and (?) Alligood

Child of Steve Bagwell and Rosalind (?)

F
Laura Bagwell is the daughter of Steve Bagwell and Rosalind (?)

Child of Ina B. Redpath and Eugene Campbell Bagwell 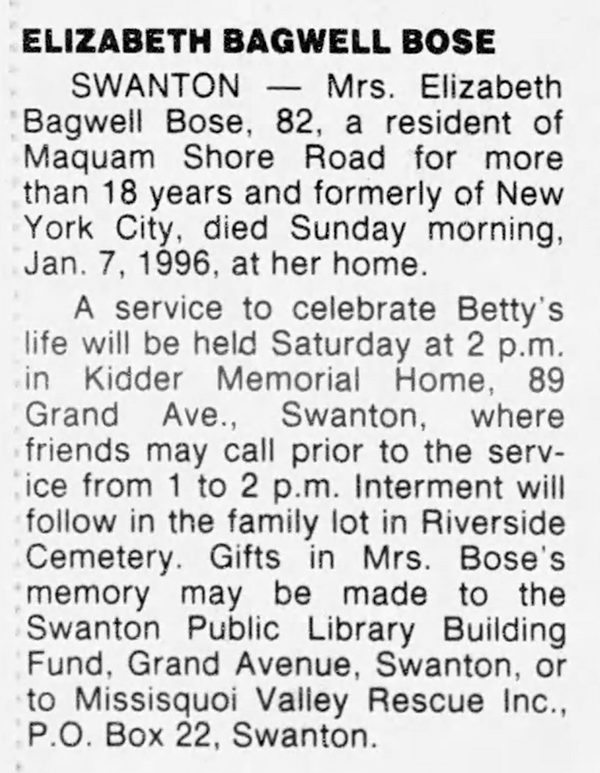 Elizabeth (Bagwell) Bose
The Burlington Free Press, January 10, 1996 - Page 16
Elizabeth Bagwell was born on 14 July 1913 in Manhattan, New York City, New York.1 She was the daughter of Eugene Campbell Bagwell and Ina B. Redpath. As of after 1930,her married name was Bose. Elizabeth Bagwell married John Bose after 1930. Elizabeth Bagwell died on 7 January 1996 in Swanton, Vermont, at age 82 died of Carcinoma of the Bowel.1 She was buried at Riverside Cemetery, Swanton, Frankin County, Vermont.1

Dorothy was born September 4, 1929 to Cora Anna Powell Bagwell and Conan Bagwell in Boaz, Kentucky. They preceded her in death as well as sisters Louise Bagwell and Sue Adams Mitchell. Dorothy worked many years in the restaurant industry. She worked in healthcare later in life and most enjoyed being a companion to patients with Alzheimer’s disease.

She is survived by her children, Phillip K. Barkley; Ronnie D. Barkley (Janice); C. Daryl Barkley, all of Paducah, and Selina J. Costley (Gordon) of Louisville. Also, surviving her are three grandchildren, Shannon Sheppard, Tara Barkley and April Griggs. Her surviving great grandchildren are Jana Everett, Jesse Abbott, Ciara Barkley and Jada Barkley. Dorothy is survived by great, great grandchildren, also. A sister-in-law Martha Jennings Burgess of Anchorage, Alaska survive her as well as three nieces, Vickie Collins (Tom) of Paducah, Nancy Mahoney (Clint) of Birmingham, and Susan Miller Burgess Dunkin (Curtis) of Anchorage, Alaska. Dorothy is survived by great nieces as well as great, great nieces. She was formerly married to Clarence E. Barkley, Homer Ralph Jennings, and Ralph Bogard all of whom preceded her in death. Dorothy loved her family and never missed an opportunity to bring everyone together for special occasions. We will forever be surrounded by the love from our mother, Mama Dot, Nanny, Gran and Aunt Dot. She was a member of Memorial Baptist Church in Murray, Kentucky. She lived in Murray during the last years of her life married to Ralph Bogard, who preceded her in death. She cherished her friends at Memorial and counted these members of the congregation as angels among us. Dorothy moved home to Paducah in late 2017 to be near the family residing there. The move home with her boys near her and visits from extended family made her life most enjoyable.

A private Memorial Service will be held at a later time.

Expressions of sympathy can be made to Memorial Baptist Church 906 Main Street Murray, Kentucky 42071

Lindsey Funeral Home is handling arrangements. On-line condolences may be left at www.lindseyfuneral.com.