Ruth Nickle was also known as Ruth Nickell. She was born in 1806 in Virginia.1 She married Benjamin E. Herring on 16 October 1830 at Monroe County, Virginia. As of 16 October 1830,her married name was Herring. Ruth Nickle died on 3 March 1865.1 She was buried at Huntsville Cemetery, Huntsville, Logan County, Ohio.1

F, b. circa 1845
Barbury E. Herring was born circa 1845 in Ohio. She was the daughter of Benjamin E. Herring and Ruth Nickle.

F, b. circa 1837
Malinda E. Herring was born circa 1837 in Ohio. She was the daughter of Benjamin E. Herring and Ruth Nickle.

M, b. 1872, d. 1947
David Oden Herring was also known as Ode Herring. He was born in 1872 in Ohio.1 He was the son of Addison Curry Herring and Isabelle Miller. David Oden Herring died in 1947.1 He was buried at Fairview Cemetery, Belle Center, Logan County, Ohio.1

F, b. circa 1875
Mary Ette Herring was born circa 1875 in Ohio. She was the daughter of Addison Curry Herring and Isabelle Miller.

F, b. 1 April 1935, d. 10 October 2014
Grace Broadwater was born on 1 April 1935 in Greenville, Greenville County, South Carolina.1 As of 1953,her married name was Bagwell.1 She married Robert Adolph Bagwell, son of Newman Lindsay Bagwell and Malissie Samantha Porter, in 1953.1 As of 1966,her married name was Ruff. Grace Broadwater married Paul Eugene Ruff in 1966. Grace Broadwater died on 10 October 2014 in Greenville, Greenville County, South Carolina, at age 79
Grace Broadwater Ruff, 79, of Greenville, widow of Paul Eugene Ruff, passed away Friday, October 10, 2014.
Born in Greenville, she was the daughter of the late Ruth Vanadore & Grady Broadwater. She worked at Furman University for over 20 years. She was a long time member of Tremont Church of God where she served as the Secretary of her Sunday School Class and was a member of the choir. Grace loved gardening and working crossword puzzles.
She is survived by one daughter, Tondra Freeman, and her husband, Charlie; a son, Greg Bagwell, and his wife, Barbara; three stepchildren; four grandchildren, Amy Dickerson, Adam Bagwell, Chad Freeman, and Jessica Bagwell; and two great grandchildren, Taylor Freeman, and Landyn Dickerson.
She was preceded in death by her brother, Cecil Broadwater.
Visitation will be held Monday, October 13, 2014 from 10:30 a.m. until 11:45 a.m. at Tremont Church of God with the service to follow at 12:00p.m. Burial will take place at Graceland Cemetery, West.
In lieu of flowers, Memorials may be made to the Cancer Society of Greenville, 113 Mills Ave., Greenville, SC 29605.
The family will be at the residence.
Thomas McAfee Funeral Home, Northwest.1
She was buried at Graceland West Cemetery and Mausoleum, Greenville, Greenville County, South Carolina.1

M
Greg Bagwell is the son of Robert Adolph Bagwell and Grace Broadwater.1 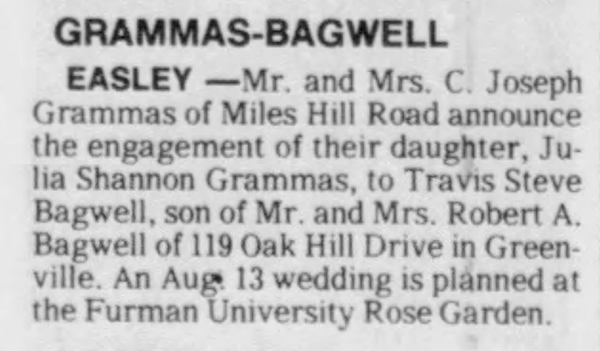