M, b. May 1878
Abraham Trower was born in May 1878 in Virginia. He married Grace Bagwell, daughter of Isaac Bagwell and Fanny Upshur, on 12 October 1898 at Northampton County, Virginia. 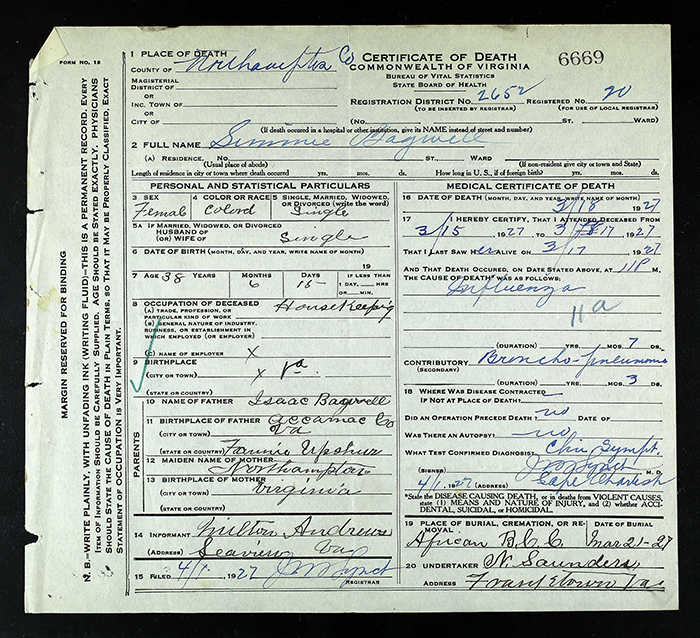 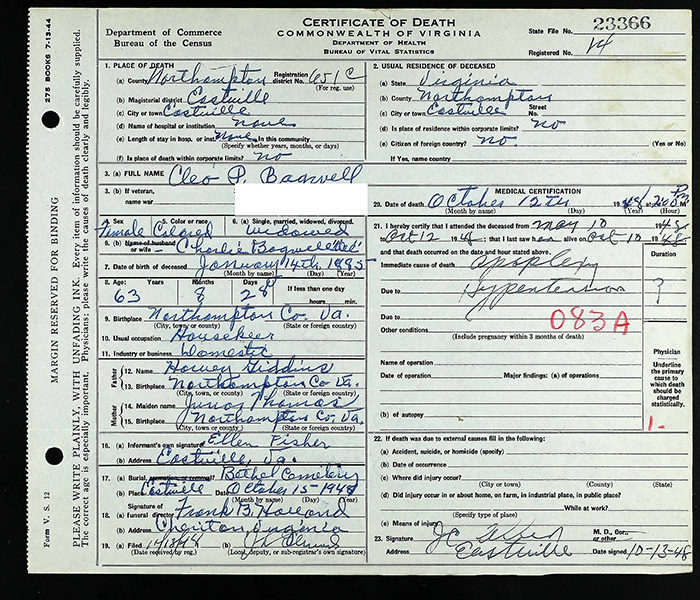 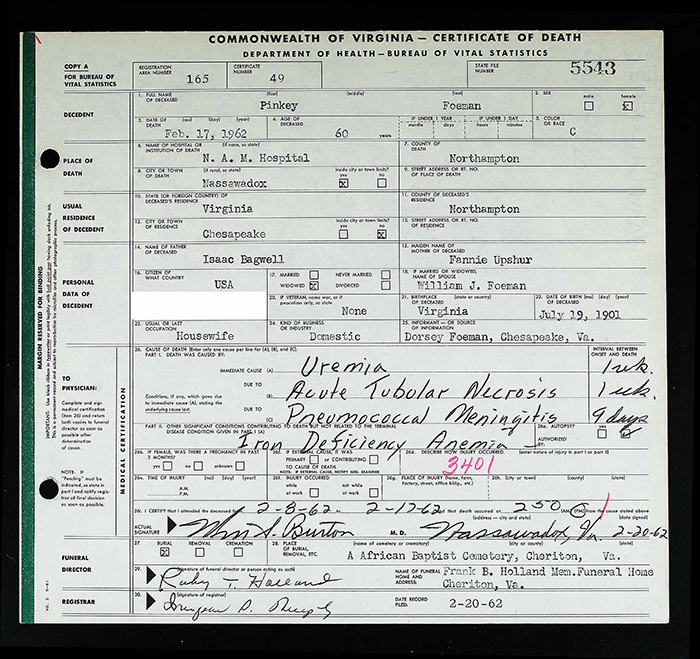 M, b. November 1885
Frank Bagwell was born in November 1885 in Northampton County, Virginia. He was the son of Isaac Bagwell and Fanny Upshur.

Mrs. Louise Cox Woodham Hinson passed away on September 27, 2015, at the age of 97. Funeral services will be held at 3:30 p.m. Wednesday, September 30, 2015 at the Glover Funeral Home Chapel. A private family burial will follow in the Pilgrim Rest Baptist Church Cemetery Newton, AL with Kendall Glover directing. Visitation services will be held at 2:30 p.m. to 3:15 p.m. Flowers will be accepted or memorial contributions may be made to Union Baptist Church 4149 Co. Rd. 44 Hartford, AL. Mrs. Hinson was born on October 24, 1917 in Geneva County the daughter of William Henry Cox and Era Mae Cox. As a longtime resident of Geneva County, she lived a life of serving others. She was a faithful member Union Baptist Church in Slocomb, Alabama. Her life of service is marked by her involvement in her community and her love and generosity towards her family and friends. After many years of service, she retired as the manager of the lunchroom in the Slocomb City School System. Following her retirement, she remained active in various community organizations and remained committed to caring for her family. She was preceded in death by her parents, William Henry and Era Mae Cox; 5 siblings; 2 husbands, Irby Woodham and Elijah Hinson; 2 daughters Juanita Woodham Brogdon, Jean Woodham Baxley; great grandson, Casey Brogdon. Survivors include: 3 grandchildren, Pam Strickland (Tony), Chuck Brogdon and Lisa Register Cutchins; great-grandchildren, Drew Strickland, (Beth) Brady, Eli, Jake Strickland, Reid Strickland, Seth Strickland, Aaron Cutchins (Beth) Clinton Bradley, Addison, Kyler Cutchins, and Kelsie Cutchins Newell (Andrew). Glover Funeral Home of Dothan has been entrusted with the arrangements.

Eunice Cox was born on 21 November 1920.1 She was the daughter of William Henry Cox and Era Mae Gilley.1 Eunice Cox died on 26 September 2001 at age 80.1 She was buried at Pilgrims Rest Baptist Church Cemetery #1, Houston County, Alabama.1

Michael Henry Cox was born on 27 April 1949 in Hartford, Geneva County, Alabama.1 He was the son of Herbert Cox and Mary Delene Shepard.1 Michael Henry Cox died on 8 February 2012 in Thomasville, Thomas County, Georgia, at age 62
Michael Henry Cox was the son of the late Herbert Cox and Mary Shepherd Cox. He was married to Linda Jo Hinson Cox who survives. He graduated from Leon County High School in 1968, he was a veteran of the US Army where he served in Vietnam, was a Boy Scout leader of troop 104 from 1978-1992, and retired from Ring Power Corp. after 35 years. He loved his family and church and enjoyed gardening.