F
Hillary Bagwell is the daughter of John Arvel Bagwell and Deborah Gist.


Betty Lou Byrd Bagwell was born on June 14, 1932 in Parksley, Virginia. She was the only child born to the late Harold Douglas and Alcoria Eliza Wilson Byrd. Betty Lou received her early education in the schools of Accomack County, Virginia. She graduated from Mary N. Smith High School. She furthered her education at Virginia State University in Petersburg, Virginia, graduating with a Bachelor of Arts Degree. Betty later pursued a Masters Degree at Temple University in Philadelphia, Pennsylvania. Betty’s Christian faith journey began at a tender age. She was baptized at Metompkin Baptist Church in Parksley, Virginia where both of her parents held leadership roles during her childhood and adult life. After graduating from Virginia State University, Betty taught in elementary schools in Accomack County for fifteen years. She then migrated to Philadelphia, Pennsylvania where she taught for an additional twenty-six years at William B. Mann Elementary School until her retirement. In her younger years, the dark haired shapely beauty captured the eye of Accomack’s sought after young bachelor, Kenneth Lowell Bagwell. To "WOW” her like no other, young Kenneth devised a plan to take her car, wash, wax, and return it to her school parking lot.. .all unknown to his doe eyed beauty. This left her.. .for in her life.., completely speechless! This gesture blossomed into a courtship that led them on a journey together as husband and wife for fifty years. Kenneth and Betty Lou were married on December28, 1957. This union was blessed with two daughters, Keva Michaela and Kemia Clarke. To her family she was affectionately called ‘Ma Betty Lou”, “GranMa” “Betty B”, and “B.B” No matter what she was called. She gave her love to us all! In 1980, Betty joined White Rock Baptist Church where she was an active and faithful member. During her nearly thirty year membership, she was the kind of Christian God has called us to be, serving as President of the Good Sheppard Circle, as Church School Teacher and Assistant Superintendent of the Adult Department in the Christian Education Ministry, as chairwoman of many church programs and committees. Other leadership positions that she held dear to her heart were those in the West Philadelphia Baptist Congress of Christian Education. She belonged to the Sheepfold of Peter/Daniel and was a driving and inspirational force among her fellow members truly living up to our church theme and vision statement, always giving “nothing less than her best”! Betty Lou had a keen sense of humor…she could make you laugh! She had a passion for shoes and expensive hats. Betty had a remarkable and graceful command of language. She was a true lady of class and demonstrated good taste in all things. This was a woman with a unique depth of character. Betty’s loving care for children enabled her touch to resonate in their souls. That very same love transformed a small lot of land on a city block into a beautiful garden, full of color and texture and continuous brilliance. On Monday, October 13, 2008, God walked through His garden and selected one His finest flowers to take home with Him. This phenomenal woman lives on in the hearts of: her beloved husband, Kenneth; her loving daughters, Keva and Kemia; her treasured grandchildren, Kiche’, Keith, Jr., Kyler, Kolbi and Karis whom she lovingly called her “special K’s”. Precious memories will also linger on in the hearts of: her stepson, Drexel, beloved brothers-in-law, Edwards and Robert Bagwell; two sisters-in-law, Francis Edwards and Viola Bagwell; beloved cousins, Mary Ann Warner, Carolyn Wilson (Niney) and Vivian Dodson; cherished friends, Marie Humbles and Rozelma "Chuck" Savage; and a host of other relatives, friends and her Christian co-laborers and White Rock Church family.
Cooper and Humbles Funeral Co., Inc.
P.O. Box 176, 24497 Mary N. Smith Rd., Accomac, VA 23301


She was buried on 14 October 2008 at Whartons Cemetery, Parksley, Accomack County, Virginia.1 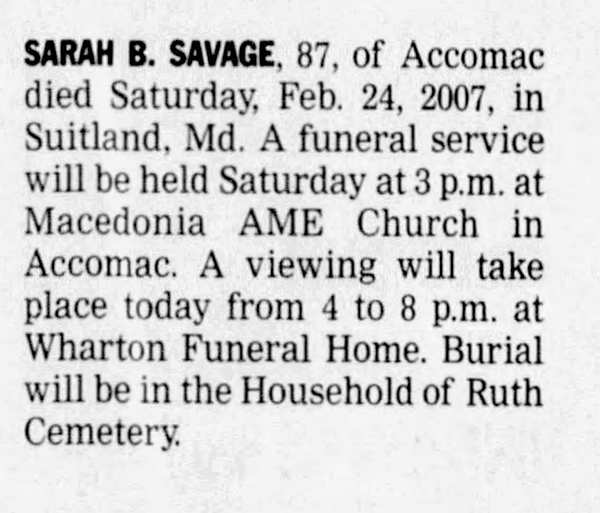 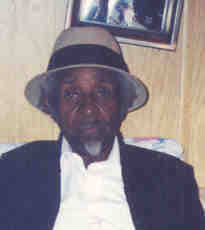 
WILLIAM “BUDDY HOOTEN” SAVAGE, son of the late Ida Shields, was born on March 12, 1924 in Accomack County, Virginia. He was called home on September 11, 2010 at Shore Life Care in Parksley, Virginia.

While working as a farmer, he met and courted a young lady named Sarah Alice Bagwell whom he later married in 1943. They were blessed with six kids. He was a devoted, loving, kind, warm, and friendly person who enjoyed life and cutting the breeze with his friends, and anyone who would stop by. He was a man who wouldn’t tolerate any nonsense. Anyone who knew him knew he was a great guy.

He was preceded in death by three sons, William Jr., Lee Edward, and Charlie Williams, by one daughter, Hilda Pauline, and by one brother-in-law, Robert Bagwell. 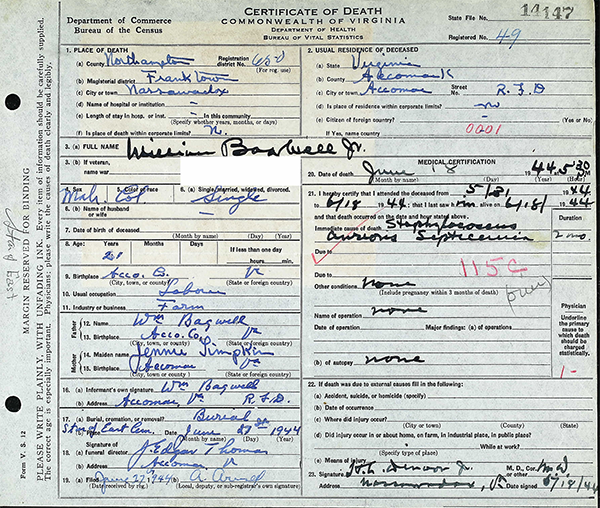 USS Chester (CL/CA-27), a Northampton-class cruiser, was the second ship of the United States Navy named after the city of Chester, Pennsylvania.

Chester remained on patrol with Task Force 8 (TF 8) in Hawaiian waters. On 12 December, her planes bombed a submarine, then guided Balch to a depth charge attack which continued until contact was lost.

1942
Chester supported the reinforcement landing on Samoa (18–24 January 1942), then joined Task Group 8.3 (TG 8.3) commanded by Adm. William Halsey for the successful raid on Taroa (1 February). Retiring under heavy air attack, she received a bomb hit in the well deck which killed eight and injured 38. The Chester was the only surface ship to lose men in the first surface attack of the Pacific war. She returned to Pearl Harbor on 3 February for repairs.

Following an escort voyage to San Francisco, Chester joined TF 17 for the Guadalcanal-Tulagi raid (4 May); the attack on Misima Island, Louisiade Archipelago (7 May); and the Battle of the Coral Sea (8 May) during which her steady antiaircraft fire protected the carriers providing the air strikes which stopped the invasion force heading for Port Moresby, New Guinea. Five of Chester's crew were wounded in this encounter. On 10 May, she received 478 survivors of Lexington from Hammann, whom she transferred to Tonga Island on 15 May.

After a West Coast overhaul, Chester arrived at Nouméa on 21 September 1942, to join TF 62 for the landings on Funafuti, Ellice Islands (2–4 October). She then proceeded south and while cruising in support of the operations in the Solomons, specifically north of the New Hebrides Islands, Chester was hit by a torpedo from I-176 on the starboard side, amidships on 20 October which killed 11 and wounded 12. She returned to Espiritu Santo under her own power for emergency repairs on 23 October. Three days later, President Coolidge struck a mine, and Chester sent fire and rescue parties to her aid as well as taking on the 440 survivors for transfer to Espiritu Santo. She steamed to Sydney, Australia on 29 October for further repairs and on Christmas Day, departed for Norfolk and a complete overhaul.

1943
Returning to San Francisco on 13 September 1943, Chester operated on escort duty between that port and Pearl Harbor until 20 October. On 8 November, she cleared Pearl Harbor for the invasion of the Gilbert Islands. On 18–20 November, after air attacks, destroyers and cruisers bombarded Tarawa. Chester was the lead ship and received some accurate fire from the beach the first two days. The Chester, along with the rest of the division, also bombarded Apemoma, another of the Gilberts. She covered the landings on Abemama Island and bombarded Taroa, Wotje, and Maloelap.

1944
Chester assumed antisubmarine and antiaircraft patrol off Majuro until 25 April 1944, when she sailed for San Francisco and brief overhaul (6–22 May). She joined TF 94 at Adak Island, Alaska on 27 May for the bombardments of Matsuwa and Paramushiru in the Kuriles on 13 June and 26 June, then sailed to Pearl Harbor, arriving on 13 August.

Chester sortied on 29 August with TG 12.5 for the bombardment of Wake Island (3 September), then arrived at Eniwetok on 6 September. She cruised off Saipan and participated in the bombardment of Marcus Island on 9 October, before joining TG 38.1 for the carrier strikes on Luzon and Samar in support of the Leyte operations, as well as searching for enemy forces after the Battle for Leyte Gulf (25–26 October).

1945
From 8 November 1944 to 21 February 1945, Chester operated from Ulithi and Saipan in bombardment of Iwo Jima and the Bonins, supporting the invasion landings of 19 February.

After another West Coast overhaul, Chester returned to Ulithi on 21 June, and conducted patrols off Okinawa from 27 June, as well as covering minesweeping operations west of the island. In late July, Chester was assigned to the force supplying air cover for the Coast Striking Group (TG 95.2) off the Yangtze River Delta and protecting minesweeping. In August, she made a voyage to the Aleutians, and on the last day of the month sailed to participate in the occupation landings at Ominato, Aomori, Hakodate, and Otaru in September and October. William Henry Bagwell Jr. died on 18 June 1944 in Nassawadox, Northampton County, Virginia, at age 21. He was buried on 27 June 1944 at Star East Cemetery, Accomac, Accomack County, Virginia.


Obituary
Written By: Joyce Lee
Jennie Frances was born on June 13, 1925 to William and Jennie Simpkins Bagwell in Accomack, Virginia. A mother extraordinaire. She raised six children. Brenda, Patricia, Joyce, Jacob III, Valerie, Richard. Together with her husband of 49 years they raised their children to be god-fearing, industrious and scholarly. Each child found their place in the world because of the foundation that was laid at home.

Frances was a woman of many talents. She liked to knit and crochet; if you have one of her many works of art it is now a treasure! She also crafted handmade clothing. Her sewing skills were top notch and useful at the family business; Edwards and Son’s Cleaners. Mother was a firm believer in discipline. Thus, she instilled the obedience needed to live a virtuous life. Therefore, we retired betsy on her behalf at the 90th birthday party! Her 96th, a memory to cherish forever, hosted by Richard at his house was a very special surprise. She was a hard worker and worked at various jobs throughout her life. Frances was an active and faithful member of Union Baptist Church in New Rochelle, New York. She served on numerous committees and participated in ministry. She continued her walk with the Lord at Galilee Baptist Church in Suitland, Maryland.

Mother lived her life to the fullest. With her daughters in tow and her eldest leading the way she toured the world! Seeing the sites in numerous far-away lands and areas of the U.S. The trips were not complete unless mom purchased t-shirts for everyone and sent a post card! They were slated to take yet another cruise before she became ill unexpectedly. Words of heartfelt gratitude to Brenda for everything she has done to bring joy to mom’s life. Even to the end of her days! Also, Jacob III and Valerie who were in serious health care rotation in order to help give mom the best quality of care during this time. The grandchildren also stepped up to assist with whatever the family needed. Furthermore, we would be remiss if thanks were not extended to all that gave their time and help during mom’s long illness.

F, b. 15 July 1911, d. 1 November 1993
Hazel Walker was also known as Hazel Pemkoney. She was born on 15 July 1911. As of 1940,her married name was Bagwell. She married Howard Eugene Bagwell, son of Nathaniel Bagwell and Sarah Alice Bayley, in 1940 at Philadelphia, Pennsylvania. Hazel Walker died on 1 November 1993 at age 82. She was buried at Beverly National Cemetery, Beverly, Burlington County, New Jersey.