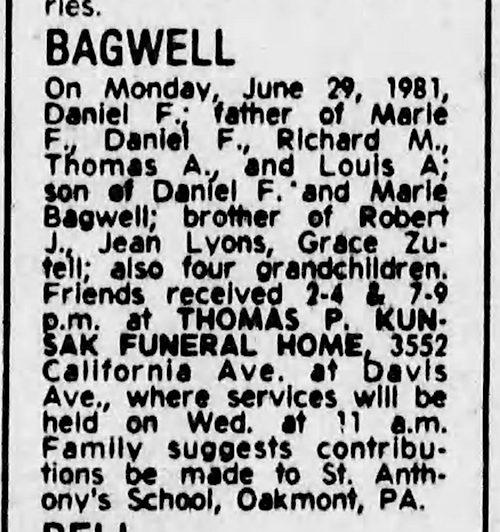 M
Danny Bagwell is the son of Billy Joe Bagwell and Katherine Rhoades.

M
Michael Bagwell is the son of Billy Joe Bagwell and Katherine Rhoades.

USS Kenmore (AP-162/AK-221) was a Crater-class cargo ship built during World War II for the US Navy. Kenmore was named after George Washington's sister Betty's house Kenmore. Kenmore was responsible for delivering troops, goods and equipment to locations in the Asiatic-Pacific Theater.

1943–1944
Kenmore loaded cargo and departed Oakland, California, 22 November 1943, arriving Pearl Harbor on 1 December. After repairs at Pearl Harbor, she prepared for the Marshall Islands invasion and departed Hawaii 25 January 1944. Nine days later she arrived off the shores of Majuro Atoll with troops and equipment of the attacking force. The cargo ship returned to Pearl Harbor 21 February, to embark garrison troops for the Gilbert Islands, debarking them at Tarawa in March.

After shuttling troops between the Gilberts and Hawaii for the next two months, Kenmore departed Honolulu 29 May, for Kwajalein, the staging area for the invasion of the Marianas. There she loaded troops of the 106th Infantry and arrived with the massive amphibious force in the assault area off Saipan 20 June. After a beachhead was secured, Kenmore remained in the area until 8 July, unloading cargo and equipment. Throughout the summer she transported troops among the Marshalls, Marianas, and Hawaii.

Reclassified AK-221 on 20 August, Kenmore stood out of Honolulu 25 September, with cargo and reinforcements for the Palau Islands via Eniwetok, arriving Kossal Roads 29 October. She continued supplying the Pacific Islands with men and equipment for the next six months.