A memorial visitation for Angel Carrene Brantley, 65, will be held on Friday, March 19, 2021 from 4:00 p.m. to 8:00 p.m. at Rose-Neath Funeral Home, 2500 Southside Drive, Shreveport, Louisiana. There will be a private family interment at Providence Road Cemetery in Spring Ridge, Louisiana.

Angel was born January 15, 1955 to Wiley Talmedge Bagwell and Lula Bagwell in Monroe, Louisiana and passed away on March 17, 2021 in Shreveport, Louisiana.

Angel was a resident of Keithville. She worked in Marketing, Sales and Customer Service in the retail industry. She was called “Nanny” by her family. She loved living up to this name by cooking for the family or playing games with the kids. She was a highly intelligent little lady and difficult crossword puzzles were one of her favorite pastimes. Nanny endured many hardships in her life but tried to overcome them with a positive attitude. She loved to tell jokes and laugh, and she liked the motto, “Live, Love, Laugh.” Nanny’s laugh will truly be missed but her family is comforted knowing she is at peace and is now laughing with those in the family that went before her.

She is preceded in death by her parents, one son, two brothers and three sisters. She is survived by her son, Roger Brantley, 43 years of age, and his wife of 18 years, Deanna Brantley, along with their children, Roman, Darren, Leia and Austin; daughter-in-law, Cora; and grandchildren, Rowan, Hadley, Gentry and Prudence; three brothers and two sisters.


She was buried on 19 March 2021 at Providence Cemetery, Spring Ridge, Caddo Parish, Louisiana.

Children of Jerry Wiley Bagwell Jr. and Aidee A. Perez 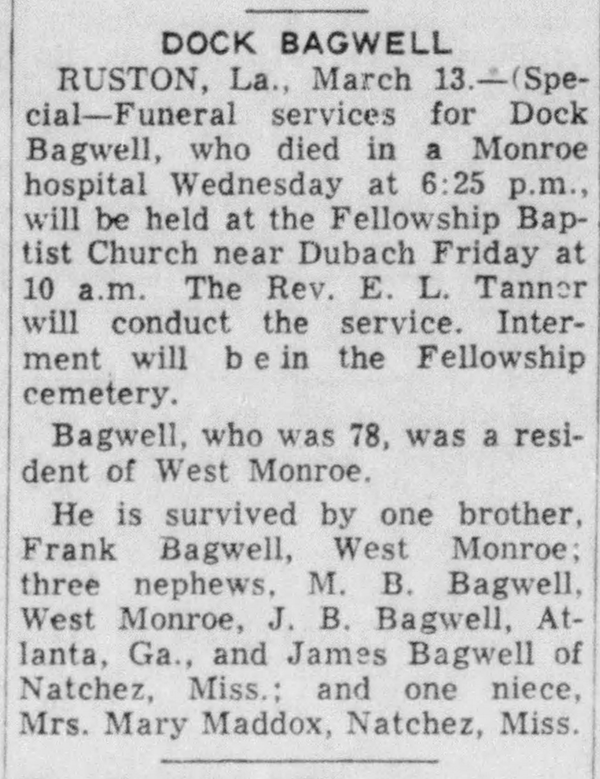