Clarence King Bagwell was born on 12 August 1908 in Brevard, Transylvania County, North Carolina.1 He was the son of Marcus B. Bagwell and Emmaline "Emily" Conly.1 Clarence King Bagwell married Flora (?) after 1925. He became rather "famous" and known as a hired "hit man". We was executed in Columbia, SC, for murdering Davis Timmerman for $500.

Finis Dowlen Dowlen - Obituary
The Leaf Chronicle - May 19. 1996 - Page 13
Finis Edward Dowlen was born on 7 July 1922 in Montgomery County, Tenessee. He was in the US Navy from from 3 August 1943 to 18 February 1946 during World War II. He died on 17 May 1996 in Clarksville Memorial Hospital, Clarksville, Tennessee, at age 73. He was buried on 20 May 1996 at Middle Tennessee State Veterans Cemetery, Nashville, Davidson County, Tenessee. 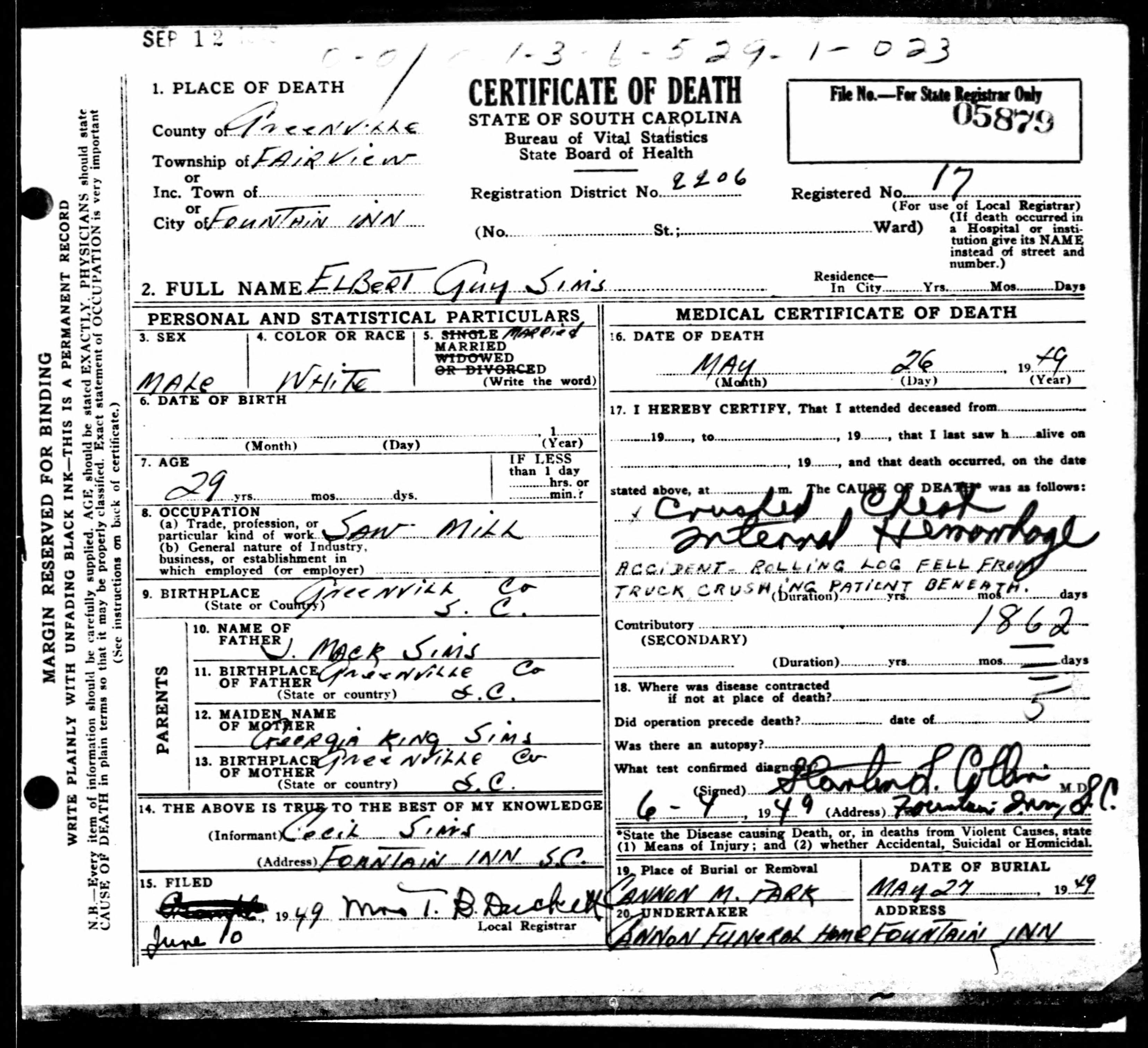 M, b. 24 March 1919, d. 30 May 2005
William Robert Harrison was born on 24 March 1919. He married Rena Elizabeth Bagwell, daughter of John Terry Bagwell and Mary Thompson Davis, on 8 May 1954 at Greenville County, South Carolina. William Robert Harrison died on 30 May 2005 at age 86. He was buried at Woodlawn Memorial Park, Greenville, Greenville County, South Carolina.

John Mack Sims was born on 3 November 1940. He was the son of Elbert Guy Sims and Rena Elizabeth Bagwell. John Mack Sims died on 8 September 1999 at age 58

John Mack Sims, 58, of 20 Rolling Green Road, Greer, passed away on Sept. 8, 1999, at Allen Bennett Hospital.
Son of Rena Bagwell Harrison of Greenville and the late Guy Sims, he attended and graduated from Ellen Woodside High School in Greenville County and was a member of the First Baptist Church of Greer. Since 1979 he had been the manager of Greer Golf and Country Club and was owner of The Golf Pro Shop.
Mr. Sims' greatest legacy was his devotion to and love for his beloved wife, their children and grandchildren. He was a loyal friend to many who remember him as a teacher of love, generosity, and kindness for everyone in every walk of life. His loving and gentle ways have touched the lives of everyone who knew him.
Mr. Sims is survived and cherished by his wife of 39 years, Linda Chandler Sims; three children, John Mack Sims Jr. of Greer, Stephen Todd Sims of Urbana, Ohio, and Julie Sims Giebner of Greer; seven grandchildren, Jonathan Blake Sims, Derek Chandler Sims, Haley Brooke Sims, Riley Stephen Sims, Nicholas Todd Sims, Katherine Anne Sims, and Chandler Russell Giebner; two sisters, Elaine Wilson of Roswell, Ga., and Brenda Perry of Dunwoody, Ga; a brother, Greg Harrison of Greenville; and stepfather, William Harrison of Greenville.
The family will receive friends today, Sept. 10, from 7 to 8:30 p.m. at The Wood Mortuary in Greer.
Funeral service will be conducted Saturday, Sept. 11, at 2 p.m. at the First Baptist Church of Greer with graveside service following at Wood Memorial Park. Dr. H. Wilson Nelson will officiate.
Pallbearers will be Ronnie Bates, Fletcher Vaughn, Bardy Chapman, Mitch Turner, Robert Hannon, Doug Freeland, Bruce Redmon, and Wayne H. Keith. Honorary Escort will be members of the Board of Directors of Greer Country Club.