Barbara Nell Bagwell is the daughter of James W. Bagwell and M. Madge (?)

Before retirement, she was a teacher for the Marietta City School System for 28 years. She attended the First United Methodist Church in Port St. Lucie. She served as president of the Isle of Lombardy board of directors and Kings Isle board of directors and was on the St. Lucie West Presidents Council. In Marietta, she served on the board of directors for the Betsy Mills Club. She earned her Bachelor of Science degree with a major in art education from The Ohio State University. During her college years, she was an umpire for Intramural Field Hockey, certified by U.S. Field Hockey Association.

Children of Icy B. Sergent and George Walon Bagwell 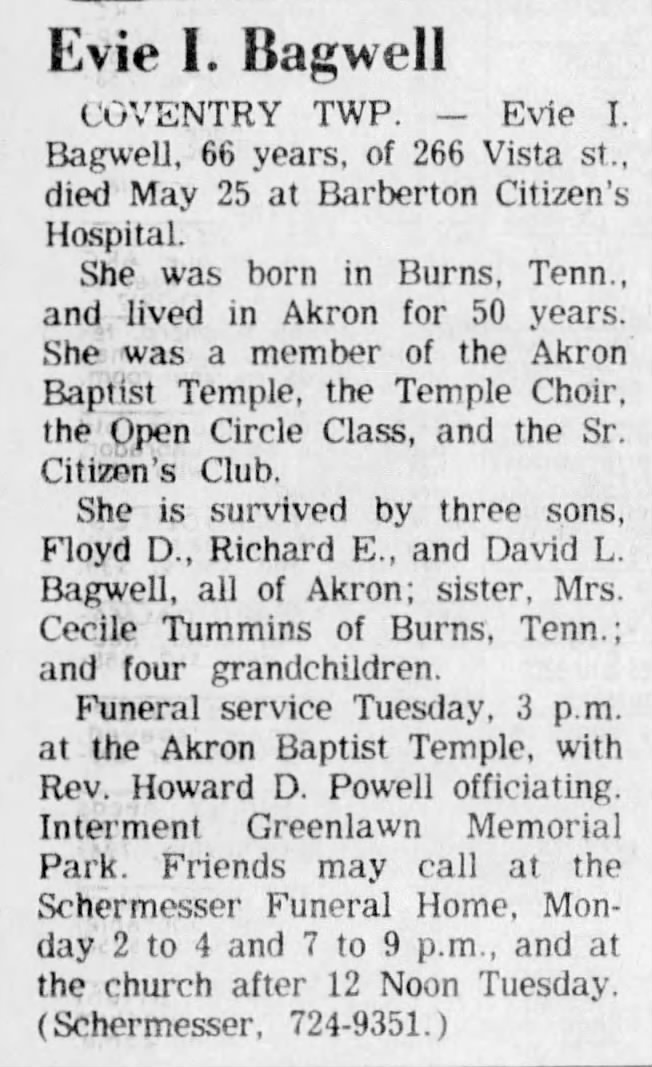 M, b. 26 June 1874
William Wexler Stanford also went by the name of Vennie. He was born on 26 June 1874 in South Carolina. He married Venizuela Bagwell, daughter of Hiram D. Bagwell and Millie Allen, after 1890.

M, b. 4 April 1915, d. 21 February 1994
Holman Myrick Bagwell was born on 4 April 1915 in Big Springs, Howard County, Texas.1 He was the son of Hubert Miles Bagwell and Gertrude Lee Myrick Day. Holman Myrick Bagwell married Evelyn Morene Atkinson in 1934. Holman Myrick Bagwell died on 21 February 1994 in Eastland, Texas, at age 78
OBIT: Ft. Worth Star Telegram, TX., p. 21 ( 02-24-94)
EASTLAND - Holman Bagwell, an employee of Bagwell Motor Co., died Monday at an Abilene
hospital. He was 72. Funeral will be at 2:30 p.m. today at First Baptist Church in Ranger. Burial will be in Evergreen Cemetery. Edwards Funeral Home in Ranger is in charge of arrangements.
Mr. Bagwell was born in Big Spring.
He was a member of Ranger Masonic Lodge and enjoyed golf and bowling.
Survivors: Wife, Evelyn Bagwell of Lake Leon; two sons, Gene Bagwell and Gerald Bagwell, both of
Eastland; sister, Juanita Roberson of Eastland; and two grandchildren. He was buried at Evergreen Cemetery, Ranger, Eastland County, Texas.1

He served in the Army and the Navy serving in Naval Intelligence.

He was a Regional Manager for Blue Cross/ Blue Shield and was part owner of Bagwell Dodge Dealership.

He was a Baptist and a member of the Eastland Gun Club.

Gerald was preceded in death by his parents, brother, and nephew, Gary.

He is survived by his wife, Jan of Eastland; daughter, Kelley Everett of Houston; granddaughter, Kaelin Everett; and several nieces and nephews.

Gerald per his wishes will be laid to rest 2:00 PM on April 2, 2019 at the Texas Veterans Cemetery near Killeen Texas.

In lieu of flowers donations can be made to one of the following: Foster’s Home for Children, PO Box 978 Stephenville TX 76401 if needed contact Larry Roberts of Eastland for further information, Alter Society, Holy Rosary Church, or a charity of your choice.

Mr. Bagwell was born Dec. 16, 1938 in Pampa, to Holman and Evelyn Atkinson Bagwell. He worked for American National Life Insurance Company as a sales agent from 1959 to 1963. He worked with his father at Bagwell Motors from 1963 until he retired in 1999.

Survivors at the time of his death include a daughter, Lorie Westover of Ranger; a brother, Gerald H. Bagwell of Eastland; three grandchildren; a special friend, Shirley Griffith of Ranger; and several nieces and nephews.1 He was buried at Evergreen Cemetery, Ranger, Eastland County, Texas.