Everyone affectionately knew her as "Miama".

She was born in Spartanburg, SC to the late Reuben and Pauline Smith Lewis.

She graduated from Inman High School in 1935 where she enjoyed playing basketball & tennis.

She worked many years in the office of the family business.

She was the oldest member of the Aldersgate United Methodist Church and served with the UMW ladies. She enjoyed painting china and making Christmas ornaments that she graciously gave away.

In addition to her husband, Homer of 47 years she was predeceased by one brother, Reuben P Lewis, and two sisters, Jewel Callia and Lake Canning.

In lieu of flowers, donations can be made to the Aldersgate United Methodist Church, 690 Park Street. Inman SC 29349 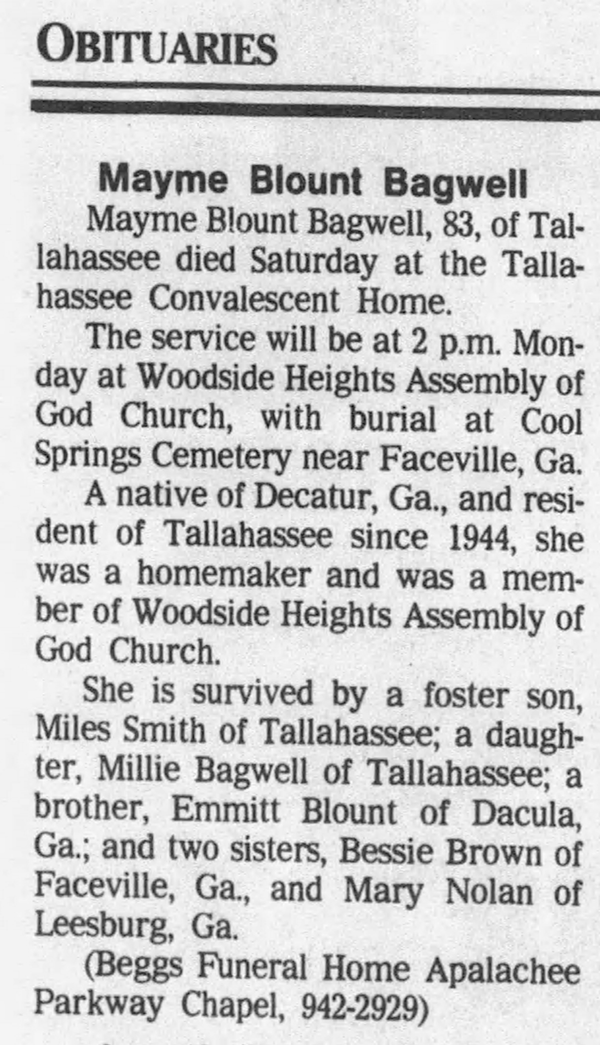 Graveside service will be held 4 P.M. Thursday, May 11, 2017 at Glenfield Memorial Park in New Albany with Billy Hutcheson officiating. Visitation will be at Holland Funeral Directors Tupelo from Noon till 3:00 P.M. on Thursday.

Condolences may be emailed to hollandfuneraldirectors@comcast.net
Published in The Daily Journal on May 10, 2017.1 He was buried at Glenfield Memorial Park, New Albany, Union County, Mississippi.1

F, b. 31 August 1941, d. 2 December 2011
Janice Mae Polk was born on 31 August 1941.1 As of before 1961,her married name was Bagwell.1 She married Carlton Lee Bagwell, son of John Quincy Bagwell and Edna Earl Foster, before 1961.1 Janice Mae Polk died on 2 December 2011 at age 70
RULEVILLE - Janice Polk Bagwell, 70, Friday, Dec. 2, 2011, at Greenwood-Leflore Hospital. She was formerly from Tupelo but was a current resident of Ruleville, Miss. She was born in Sommerville, Tenn. on Aug. 31, 1941 to Earnest Polk Sr. and Pauline Mooneyham Polk. She was a homemaker and a Baptist. She enjoyed her garden and loved to attend her church and sing gospel songs.

She is survived by one daughter, Janet Knotts (Michael) of Decatur, Ala; two sons, John Bagwell of Ashland, and Ronald Bagwell of Oxford; one sister, Joyce Holland of Byhalia; two brothers, Earnest Polk Jr. (Cleo) of Moscow, Tenn. and Charles Polk(Willene) of Byhalia; three grandchildren, Paul Drake of Birmingham, Matthew Drake and James Drake both of Decatur, Ala.

She was preceded in death by her parents, one son, Donald Bagwell, one daughter, Tabitha Bagwell and one sister, Lois Blalock.

Janet Bagwell is the daughter of Carlton Lee Bagwell and Janice Mae Polk.1

Children of Luther A. Bagwell and Rachel Smith

Janie Bagwell is the daughter of John Quincy Bagwell and Edna Earl Foster.

Virgie Bagwell was born on 2 December 1909. She was the daughter of Robert Fulton Bagwell and Mattie Frazier. Virgie Bagwell died in April 1988 at age 78.


Funeral services for Herman Mitchell Bagwell, of French Camp, will be held at 2:00 p.m. on Saturday, October 23, 2021 in the Oliver Funeral Home Chapel, with burial following in Bethel Methodist Church Cemetery in Kilmichael, MS. Rev. Don Smith will officiate the service.

Mr. Bagwell, 86, passed away at his home on Monday, October 18, 2021. He was born October 20, 1934, in Choctaw County to Doyle Turner and Virgie Marie Burdine Bagwell. The family moved to Poplar Creek around 1940. He attended Poplar Creek School and graduated from Big Black High in Kilmichael, MS. He joined the U.S. Marines in 1956 and had an honorable discharge in 1958. He became an independent truck driver moving people all over the U.S. and Canada. He worked for Mayflower, Global, and United Van Line until he retired in December 1995.

He is survived by his children, Dawn Bagwell Meeks, of Brandon, MS, Kipp Mitchell Bagwell (Melissa) of Richland, MS, and Narcissa Faye Bagwell Harvey (Chad) of Covington, LA. He leaves nine grandchildren and several great grandchildren; two sisters, Rebecca Bagwell Wilson (Boyce) of Kilmichael, MS and Sue Bagwell Burns Pemberton (Curtis) of Montgomery, AL; one brother, Gerald H. Bagwell (Shirley) of Clinton, MS; and a host of nieces, nephews and family members. He also leaves a special bonus sister, Jan Thomas, that had helped him in many ways over the last years. He leaves his little candy-eating buddy, Blake, and also his fur companion, Dixie, that has stayed by his side for many years. He was preceded in death by his parents, and sisters, Ruth Bagwell McGinn, and Jo Ann Bagwell Dees Thrailkill.

Herman was an avid hunter, fisherman, gardener, and loved taking care of his bees. He attended Poplar Creek Baptist Church. He will be greatly missed by the community of Poplar Creek, MS.
Contributor: Kimberly Clark-Bell (50455762) • klc936@msstate.edu

Funeral services for Herman Mitchell Bagwell, of French Camp, will be held at 2:00 p.m. on Saturday, October 23, 2021 in the Oliver Funeral Home Chapel, with burial following in Bethel Methodist Church Cemetery in Kilmichael, MS. Rev. Don Smith will officiate the service.

A completed obituary will be forthcoming.

F, b. 21 November 1931, d. 10 May 2017
Deneen LaVerne Mangrum was born on 21 November 1931 in Tennessee.1 As of before 1961,her married name was Bagwell.1 She married Jesse Robert Bagwell, son of Harvey Greely Bagwell and Tennie Rebecca Vaden, before 1961.1 Deneen LaVerne Mangrum died on 10 May 2017 at age 85.1 She was buried at Woodlawn Memorial Park and Mausoleum, Nashville, Davidson County, Tennessee.1