Martha Cox was born on 22 December 1923 in Geneva County, Alabama. She was the daughter of Julius Edward "Eddie" Cox and Sarah Mattie Estelle Metcalf. Martha Cox died on 7 June 2005 in Dothan, Houston County, Alabama, at age 81
The Dothan Eagle
Houston Co., Ala.

Martha Cox Thomley went to be with her Lord Tuesday, June 7, 2005, at her home. She fought a courageous battle with Alzheimers for 11 years.

Graveside services will be 10 a.m., Thursday, June 9, 2005, at Memory Hill Cemetery with Dr. Johnny Fain officiating. The family will receive friends at the funeral home from 6 until 8 p.m. tonight. At other times the family will be at the Stewart residence 6861 J.B. Chapman Road, Midland City, Ala.

Mrs. Thomley was born in Geneva County, Ala. on Dec. 22, 1923. She graduated from Hartford High in 1941. She was a 1945 R.N. graduate of Moody Hospital School of nursing. She was a partner with Ben Thomley at Thomley Plumbing Company, Vance Equipment Company and Thomley's Heating and Air Conditioning. She retired in 1976. Mrs. Thomley was a member of First Baptist Church.

She was preceded in death by her parents, Mattie and J.E. Cox, Hartford; one brother, Ed Cox, Abbeville, Ala; and one love sister, Marion Harper of Panama City, Fla.

A special "Thank You" to Martha's caregivers and guardian angels, Blondell Turner, Gert Myhand and also Betty Jo Terry who is deceased. She was buried at Memory Hill Cemetery, Dothan, Houston County, Alabama.

Magnola Cox was born on 21 January 1891.1 She was the daughter of William Jasper "Willie" Cox and Martha Ellen "Dollie" Parker. Magnola Cox died on 11 February 1966 at age 75.1 She was buried at Pilgrims Rest Baptist Church Cemetery #1, Houston County, Alabama.1

Infant Bagwell was born circa 1884. He was the son of Reverend George Larkin Bagwell and Esther Angeline "Angie" Murphy. Infant Bagwell died on 12 May 1885. He was buried at Harmony Grove United Methodist Church Cemetery, Auburn, Barrow County, Georgia. 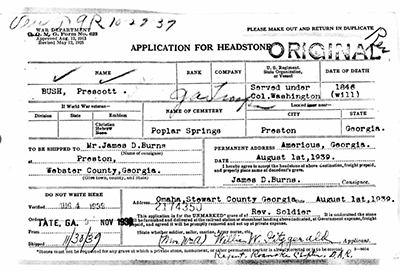 Not Used
Prescott Bush was born in 1758 in Edgefield County, South Carolina.1 He was the son of Richard Bush and Mary Jane Prescot.1 He fought in the Revolutionary War. He served under Colonel Washington. Believe this to be William Augustine Washington (February 28, 1752 to March 6, 1810), was a cavalry officer of the Continental Army during the American Revolutionary War, who held a final rank of brigadier general in the newly created United States after the war. Primarily known as a commander of light dragoons, he led mounted troops in a number of notable battles in the Carolinas during the campaigns of 1780 and 1781.1 Prescott Bush married Susannah Hinds before 1787. Prescott Bush died on 23 June 1846 in Stewart County, Georgia.1 He was buried at Poplar Springs Cemetery, Preston, Webster County, Georgia.

Richard Bush was born in 1736 in Essex, Virginia.1 He was the son of John "Bibby" Bush and Susannah Spencer Walker.2 Richard Bush married Mary Jane Prescot before 1758. Richard Bush died in 1803 in Edgefield County, South Carolina.1

Richard R. Bush was born on 1 June 1640 in Essex, Virginia.1 He was the son of Abraham Bush.1 Richard immigrated in 1670 to Virginia Colony aboard ship from Bristol , and was indentured for up to four years to one William Roberts . On 2 March, 1677/78 in Old Rappahannock/Essex County, Virginia he married Elizabeth Bibby.

Richard and Elizabeth Bush lived most of their lives and died in Essex County, Virginia where they appear frequently on the Titheables Lists . On 20 April 1689 Richard(1) received a land grant of 793 acres on the south side of the Rappahannock River, on Piscataway Creek, only a few miles up stream from the holdings of William Roberts where Richard(1) had begun life in Virginia. In addition to these holdings, on 13 February 1661 Richard and Elizabeth inherited 550 acres that had been granted to John Bibby, Elizabeth's father . Elizabeth died there after 10 March 1688 . By 10 September 1689 Richard was married to a woman identified only as Mary . Their son, John, was born in 1694 . Richard died in 1700. Richard R. Bush married Elizabeth Bibby in 1671 at Rappahannock, Virginia. Richard R. Bush died on 1 June 1720 in Essex, Virginia, at age 80.1